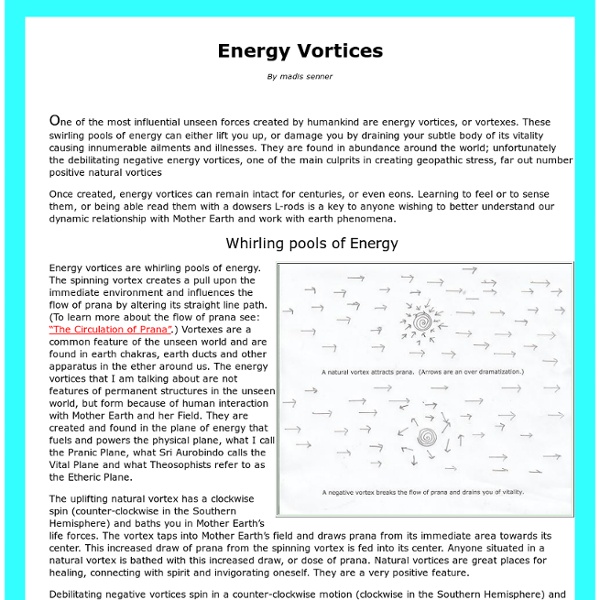 Earth Energy | Jiro Blog The Impact of Earth Energies on Life An Overview of the Origin of Earth Energies: The Hartmann & Curry Grids The sun ejects large quantities of charges particles from its upper atmosphere, consisting of a plasma of high-energy electrons and protons – called the Solar Wind. The Solar Wind reaches the earth at speeds up to 900 km/s and can cause geomagnetic storms that have enough power to knock out power grids and form auroras in the upper atmosphere. The earth, consisting mostly of molten iron, has a strong north-south magnetic field around it. The resulting currents flowing across the entire skin of the earth’s surface are known as telluric currents which are electrical currents in the form of low frequency electromagnetic waves. There are two principal grids of energy called the Hartmann and Curry Grids (named after the scientists who discovered them) both of which exist in sympathetic harmony with earth’s 24 hour period. Origins of the Life Force Sound and light References:

Earth's energy grid system. Curry, Hartmann and Ley lines The Earth's energy grid can be thought of as a web that holds or links the Earth together. The energy grid is effected by many influences - electricity, magnetism, light, color, heat, sound and matter. The planetary energy grid operates through certain geometrical patterns that follow a specific symmetry. The grids meet at various intersecting points forming a kind of matrix. You can consider the earth as a self-organizing organism (James Lovelock is the father of the Gaia theory (1979). Below you find an explanation of the Curry lines, Hartmann Lines, Schumann Waves, Black Lines, Ley lines and the planetary grid system. Sceptical comments in English about the Curry, Hartmann lines can be found on A book of Käthe Bachler full with empirical research data supported with scientific research shows clearly that we should take geobiological influences on health very serious. Curry Lines Hartmann Net or Hartmann Lines Schumann Waves

Dowsing | Dowsing for Vastu | Dowser | Pendulum Dowsing | Divining | Dowsing Course | Dowsing for Vastu | Learn Dowsing | Vaastu International | Delhi | India Dowsing for Vastu Everything in Nature is surrounded by energy fields that can be detected with dowsing. Dowsing is defined as the study of energy of field by a person who has electromagnetic ability. The universe is energy and everything in the universe radiates some form of energy, resonating at an individual frequency or, in combination with other elements, in multiples of harmonic, or sub-harmonic frequencies. Likewise, our bodies are made up of countless atoms and molecules representing many elements, each of them resonating at a unique frequency but contributing to a combined personal harmonic resonance. Likewise, our brain and nervous systems function through electrical stimuli therefore, we can consider ourselves as sensitive biological receivers. Each millisecond of our life, we are exposed to radiation from every source imaginable, radio and TV transmitters, power lines and electrical appliances. Rameshwar Prasad invites you to the Wonderful World of Dowsing

Dowsing | Slim Spurling - We have created this page as a guide to getting started with dowsing. You can use this ancient practice to identify and alleviate areas of negative earth energy, which can interfere with many aspects of your life, including your health, personal and business relationships, and finances (to name a few). First, what is dowsing? Dowsing, a common practice in many cultures, is an art that dates back thousands of years. It interfaces the earth’s energies with our own energy, and can be thought of as our intuition communicating with us through the dowsing tools. To understand dowsing, you must understand the history of humans’ relationship with the earth’s energies. Slim Spurling utilizing his unique method of dowsing. Ancient people knew how to identify areas of positive energy, because they were more in tune with the energies around them. So how does dowsing tie into all of that?

Early Infections Linked to Later Spine Disease ROME -- Low birth weight and childhood infections were associated with the later development of ankylosing spondylitis, according to a study presented here. The odds ratio for being diagnosed with ankylosing spondylitis was 1.3 (95% CI 1.1-1.6) for individuals whose birth weight was below 3,000 g compared with those of normal birth weight, reported Ulf Lindstrom, PhD, of the Sahlgrenska Academy in Gothenburg, Sweden. In addition, individuals who were diagnosed with ankylosing spondylitis more often had older siblings (63% versus 58%, OR 1.3, 95% CI 1.1-1.4), which is often considered a proxy for greater exposure to childhood infections, Lindstrom said in a press conference at the annual meeting of the European League Against Rheumatism. Genetic factors have been strongly linked with ankylosing spondylitis, particularly the HLA-B27 genotype. "It would be most interesting to try and pinpoint the specific types of infection that are implicated," he said.

ANKYLOSING SPONDYLITIS IS CAUSED BY KLEBSIELLA Evidence from Immunogenetic, Microbiologic, and Serologic Studies Alan Ebringer, BSc, MD, FRCP, FRACP From the Division of Biomolecular Sciences, King's College, University of London; and Department of Rheumatology, UCM School of Medicine, Middlesex Hospital, London, England. Ankylosing spondylitis (AS) is caused by Klebsiella pneumoniae infection. It was in 1976, that for the first time, an association was suggested between the gram-negative microbe Klebsiella and the chronic, remitting inflammatory arthritic disorder, AS.22 Using three separate approaches, involving immunogenetic, microbiologic, and serologic criteria, this article reviews the background and evidence that links the presence of Klebsiella to the development of recurrent inflammation in AS patients, especially during active phases of the disease. Recently, evidence was presented that strongly suggests that HLA-B27-positive AS and HLA-B27- negative AS were different entities. 1. Receptor Theory Molecular Mimicry Theory

Borja Montoro Character Design The Spa Studio were formerly known as Animagic Studios. Both studios have been and are owned and directed by my good friend Sergio Pablos. I created the characters for Sergio's project under his inspirating supervision and always relaying on the help of his extraordinary draftsman skills. It was a beautiful and unforgetable time. Pretty sadly, the movie finally didn't come up. Anyway, I'll always thank Sergio for giving me my first chance to do visual development and character desing. This is some of the remaining art from that time.

Once called the 'Lucky Country', our chickens are now coming home to roost We not-so-very-clever Australians have seriously compromised the choices of future generations and are now a sitting duck for further exploitation, writes Dermot Daley. IN THE 1950s and 1960s, Australia was known as the "Lucky Country". We were living off the sheep’s back, receiving £1 per pound for our wool. Shearing sheep and anything hands-on became too much like hard work so we turned to exploiting our mineral resources and anything else that wasn’t nailed down; no questions asked. Now in the 21st century, Australia is the "stupid country" and is rapidly becoming incapable of doing much more demanding than making coffee, selling real estate and handing out tourism brochures. We are "stupid" because we have endorsed increasing numbers of incompetent or corrupt persons into our Parliament, who then hijack our democratic process, mock the fundamentals of our Constitution and blithely legitimise the privatisation of profit and the socialisation of debt.