You Are Not So Smart 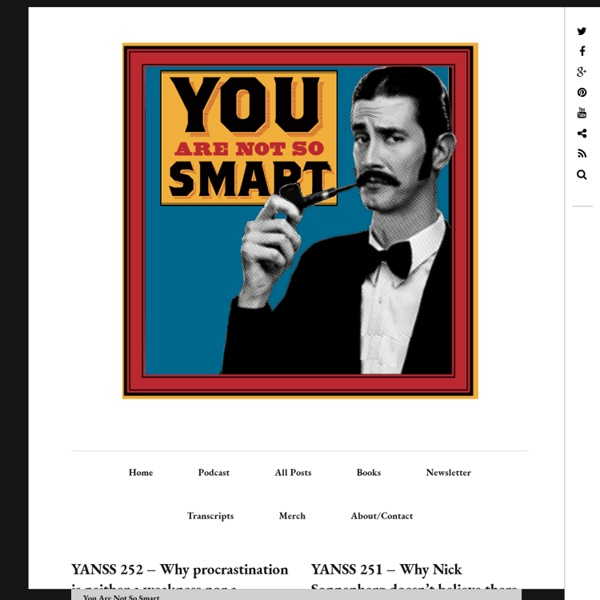 Borg Complex Case Files 2 UPDATE: See the Borg Complex primer here. Alright, let’s review. A Borg Complex is exhibited by writers and pundits whenever you can sum up their message with the phrase: “Resistance is futile.” Reasoning Resources While people generally think of an argument as a fight, perhaps involving the hurling of small appliances, this is not the case-at least as the term is used in philosophy. In philosophy, an argument is a set of claims, one of which is supposed to be supported by the others. There are two types of claims in an argument. The first type of claim is the conclusion. This is the claim that is supposed to be supported by the premises. A single argument has one and only one conclusion, although the conclusion of one argument can be used as a premise in another argument (thus forming an extended argument).

Blog by Matt Ridley Restricting whether you can build, rather than what, drives up prices My Times column on Britain's housing crisis: Sajid Javid, the Housing (etc) secretary, is right – and brave -- to go on the warpath about Britain’s housing crisis in his new national planning framework, to be launched today. Britain’s housing costs are absurdly high by international standards: eight times average earnings in England, 15 in London. A mortgage deposit that took a few years to earn in the early 1990s can now take somebody decades to earn.

Future - The surprising downsides of being clever If ignorance is bliss, does a high IQ equal misery? Popular opinion would have it so. We tend to think of geniuses as being plagued by existential angst, frustration, and loneliness. Think of Virginia Woolf, Alan Turing, or Lisa Simpson – lone stars, isolated even as they burn their brightest. As Ernest Hemingway wrote: “Happiness in intelligent people is the rarest thing I know.” Best of 2015 Deductive and Inductive Arguments  A deductive argument is an argument that is intended by the arguer to be (deductively) valid, that is, to provide a guarantee of the truth of the conclusion provided that the argument's premises (assumptions) are true. This point can be expressed also by saying that, in a deductive argument, the premises are intended to provide such strong support for the conclusion that, if the premises are true, then it would be impossible for the conclusion to be false. An argument in which the premises do succeed in guaranteeing the conclusion is called a (deductively) valid argument. If a valid argument has true premises, then the argument is said to be sound. Here is a valid deductive argument: It's sunny in Singapore. If it's sunny in Singapore, he won't be carrying an umbrella.

105 Podcasts You Should Check Out Ask our team, “What’s new?” and you’ll hear about how we’re learning on the go with podcasts. Ask our teacher bloggers about new practices they’re trying in their classrooms and you’ll hear how their encouraging reflective learning with podcasts. At the start of a new school year, we think they are a great way to continue learning and stay engaged. So grab your headphones or sync the bluetooth, and get ready to listen and learn–here is our list of favorite podcasts you should check out to support your learning. By and For Educators

Why We're All Better Than Average On a scale of one to 10, you probably think you're a seven. And you wouldn't be alone. While it's impossible for most people to be above the median for a specific quality, people think they are better than most people in many arenas, from charitable behavior to work performance.

15 Things Highly Confident People Don't Do Highly confident people believe in their ability to achieve. If you don’t believe in yourself, why should anyone else put their faith in you? To walk with swagger and improve your self-confidence, watch out for these fifteen things highly confident people don’t do. 1. They don’t make excuses. Highly confident people take ownership of their thoughts and actions. Control Explanations > Needs > Sense of Control Control is a deep, deep need | The control trap | So what? No, this is not so much about how to control people as about their needs around control. The real secret is the deep, deep need that people have for a sense of control. In persuasion, by managing how they feel about control, you can achieve far greater actual control. If you ignore this need, you might easily fall into a power battle for control of the conversation and the agenda.

Critical Thinking Model 1 To Analyze Thinking We Must Identify and Question its Elemental Structures Standard: Clarityunderstandable, the meaning can be grasped Could you elaborate further? How To Waste Time Properly - Issue 7: Waste Ever since Frederick Winslow Taylor timed the exact number of seconds that Bethlehem Steel workers took to push shovels into a load of iron ore and then draw them out, maximizing time efficiency has been a holy grail of the American workplace. But psychologists and neuroscientists are showing us the limits of this attitude: Wasting time, they say, can make you more creative. Even seemingly meaningless activities such as watching cat videos on YouTube may help you solve math problems. Brent Coker, who studies online behavior at the University of Melbourne in Australia, found that people who engage in “workplace Internet leisure browsing” are about 9 percent more productive than those who don’t. Last year, Jonathan Schooler, a psychology professor at the University of California, Santa Barbara published with his doctoral student Benjamin Baird a study called Inspired by Distraction. Schooler isn’t alone in his conclusion.

Evaluating Internet Research Sources Robert Harris Version Date: October 11, 2018 Previous: August 16, 2018, December 12, 2016; January 21, 2015, December 27, 2013; November 6, 2013; Nov. 22, 2010 and June 15, 2007 "The central work of life is interpretation." --Proverb Introduction: The Diversity of Information This Is Your Brain on Silence - Issue 16: Nothingness One icy night in March 2010, 100 marketing experts piled into the Sea Horse Restaurant in Helsinki, with the modest goal of making a remote and medium-sized country a world-famous tourist destination. The problem was that Finland was known as a rather quiet country, and since 2008, the Country Brand Delegation had been looking for a national brand that would make some noise. Over drinks at the Sea Horse, the experts puzzled over the various strengths of their nation. Here was a country with exceptional teachers, an abundance of wild berries and mushrooms, and a vibrant cultural capital the size of Nashville, Tennessee. These things fell a bit short of a compelling national identity. Someone jokingly suggested that nudity could be named a national theme—it would emphasize the honesty of Finns.