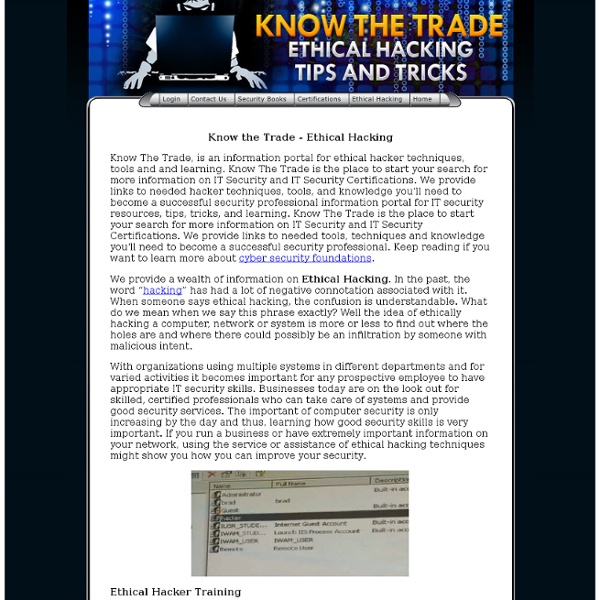 Hacking Conference - The Hacker Community's Foremost So Paros Proxy How To Become A Hacker Copyright © 2001 Eric S. Raymond As editor of the Jargon File and author of a few other well-known documents of similar nature, I often get email requests from enthusiastic network newbies asking (in effect) "how can I learn to be a wizardly hacker?". Back in 1996 I noticed that there didn't seem to be any other FAQs or web documents that addressed this vital question, so I started this one. A lot of hackers now consider it definitive, and I suppose that means it is. If you are reading a snapshot of this document offline, the current version lives at Note: there is a list of Frequently Asked Questions at the end of this document. Numerous translations of this document are available: ArabicBelorussianBulgarianChinese, Czech. The five-dots-in-nine-squares diagram that decorates this document is called a glider. If you find this document valuable, please support me on Patreon or SubscribeStar. If you want to be a hacker, keep reading. 1. 2. 3.

2600: The Hacker Quarterly Ophcrack Hacking Basics | Arrow Webzine This tutorial is for information purposes only, and I do not endorse any of the activities discussed within this guide. I nor anyone hosting this guide can be held responsible for anything you do after reading this. What you do with your day lies on your shoulders. Here with I am creating an Index.. 1. Learning how to hack is simple. 2.Cracking commercial quantum cryptography secure communicating boxes with their internals exposed, Alice and Bob . 3.Top 10 Password Crackers Anyone in the security field would be well advised to go over the list and investigate tools they are unfamiliar with. 4.How to Hack a WiFi Network. you already know that if you want to lock down your Wi-Fi network, you should opt for WPA encryption because WEP is easy to crack. 5.Common Hacking Methods. 6.

70 Things Every Computer Geek Should Know. | Arrow Webzine The term ‘geek’, once used to label a circus freak, has morphed in meaning over the years. What was once an unusual profession transferred into a word indicating social awkwardness. As time has gone on, the word has yet again morphed to indicate a new type of individual: someone who is obsessive over one (or more) particular subjects, whether it be science, photography, electronics, computers, media, or any other field. A geek is one who isn’t satisfied knowing only the surface facts, but instead has a visceral desire to learn everything possible about a particular subject. A techie geek is usually one who knows a little about everything, and is thus the person family and friends turn to whenever they have a question. If you’re that type of person and are looking for a few extra skills to pick up, or if you’re a newbie aiming to get a handhold on the honor that is geekhood, read on to find out what skills you need to know. How to become a real computer Geek? 1. 2. 3. 4. 5. 6. 7. 8. 9.

Infinity Exists I Got My Computer Back! June 4th, 2009 by Patchy It’s been several years,… but finally Patchy and his computer are reunited at last Download Here Posted in News, Vblog | 9 Comments Email Injection June 2nd, 2009 by Now that I finally got rid of WP-Forum, I can show you guys an Email Injection flaw that existed in that forum. Posted in Vblog | No Comments Infinity Exists Updates!! Nox and I haven’t made any new Full Disclosure episodes in a while because we have been busy with school. No Comments Underground – Local File Inclusion May 27th, 2009 by Ground Zero’s Underground Video demonstrates how to use Local File Inclusion (LFI). If you would like to submit a video to Infinity Exists Underground send an email describing your video to underground@infinityexists.com Posted in Underground | No Comments Underground – Windows Privilege Escalation May 26th, 2009 by In this Underground Video, Crash Overron explains a simple way to escalate privileges in Windows XP. 4 Comments Jerry Sanders Design Competition

The Infection File Popularity Contest - SpywareGuide Greynets Bl Ever wondered exactly how people who enjoy putting malicious files into the wide blue yonder ensure their bundles of joy are as attractive as possible to those who would happily download them? Well, I came across this program today and thought it was worth looking into. It dips into what's hot and current in the world of free downloads then uses that to ensnare as many potential victims as possible. How do they do it? The above program helps, for starters. As you can see, there's a number of "Top 100" options for music, videos, software and a download button. Open up the "Musik" file, and you're presented with a long list of rather current albums: Click to Enlarge A quick check of network traffic and the source of the lists is clear: Compare the list of albums above with the below screenshot of the Top Album Torrents on The Pirate Bay, organised by number of Seeders: Popular Pirate Bay Downloads, originally uploaded by Paperghost. Talk about harnessing people power...