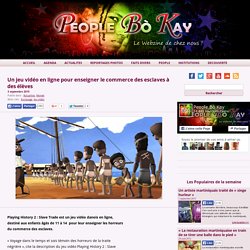 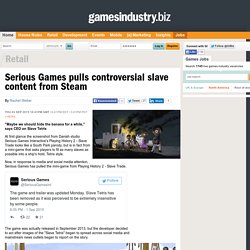 Now, in response to media and social media attention, Serious Games has pulled the mini-game from Playing History 2 - Slave Trade. The game was actually released in September 2013, but the developer decided to act after images of the "Slave Tetris" began to spread across social media and mainstream news outlets began to report on the story. Worryingly Serious Games still seems a little baffled by the negative attention for the "educational" game, despite the clearly dehumanising nature of the gameplay, calling it unimportant and comparing it to a banana. "I know I have the freedom of speech but if yelling banana means we cannot talk about the rest of fruits - well maybe we should hide the banana for a while"

Serious Games pulls controversial slave content from Steam. Opinion: What can we learn from that tone-deaf 'Slave Tetris' minigame? After a few days of deserved social media furor the now infamous “slave Tetris” minigame has been removed from Serious Games’ Playing History 2 - Slave Trade, and not a moment too soon. 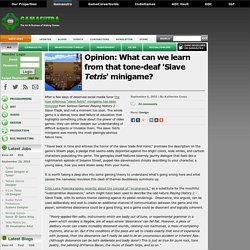 The whole game is a dismal, tone deaf failure at education that highlights something critical about the power of video games: they can either deepen our understanding of difficult subjects or trivialize them. The slave Tetris minigame was merely the most glaringly obvious failure here. “Travel back in time and witness the horror of the slave trade first hand,” promises the description on the game’s Steam page, a pledge that seems oddly disjointed against the bright colors, wide smiles, and cartoon characters populating the game.

The gameplay itself features bizarrely jaunty dialogue that feels like a nightmarish episode of Sesame Street, puppet-like slavemasters chirpily describing to your character, a young slave, how you were stolen away from your home. Slave Tetris and Our Responsibility to Game Studies. TW: I’m going to go ahead and tag this one for racism and racist imagery. 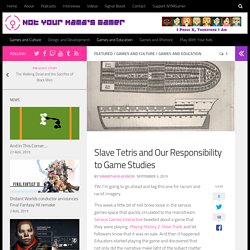 This week a little bit of hell broke loose in the serious games space that quickly circulated to the mainstream. Serious Games Interactive tweeted about a game that they were playing, Playing History 2: Slave Trade, and let followers know that it was on sale. And then it happened. Educators started playing the game and discovered that not only did the narrative make light of the subject matter (perhaps in an attempt to make it “kid friendly”) but that the game included a Tetris-based minigame that asked you to stack slaves in a slave ship for the Middle Passage. Yes, let that shit sink in for a minute….make your kids stack human beings for “efficient” transport across the ocean. I can’t even begin to tell you what all kinds of furious I would be if some well meaning teacher introduced this shit to my kid. Danish Video Game Company Launches Bizarre "Slave Tetris"

A Danish video game company has removed the "Slave Tetris" portion of their recently discounted Slave Trade game, expressing a baffling sense of bemusement at the explosion of controversy initiated by the game's arrival on the distribution platform Steam. 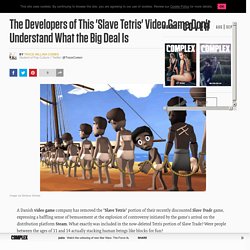 What exactly was included in the now-deleted Tetris portion of Slave Trade? Were people between the ages of 11 and 14 actually stacking human beings like blocks for fun? As this most certainly is the year 2015, there must be some sort of passably reasonable explanation for such an astounding oversight. This was surely some sort of profoundly unsettling mistake, yes?

Sadly, the "educational game" argument wasn't just a satirical phrase tossed around with glee on Twitter. Thankfully, practically no one is taking Simon's reasoning as anything but an obvious case of The Stupids. UPDATE: The game and trailer has been updated. Do better, video games. Racist Video Game 'Playing History 2: Slave Trade' Pokes Fun at the Slave Trade - Clutch Magazine. Developers Release Questionable Slave Trade Game. It seems like the "What year is this?! 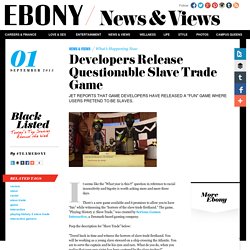 " question in reference to racial insensitivity and bigotry is worth asking more and more these days. Questionable Slave Trade Game Released. What Year Is This?! 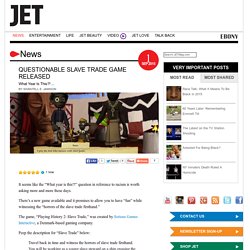 ... By Shantell E. Jamison It seems like the “What year is this?!” Question in reference to racism is worth asking more and more these days.