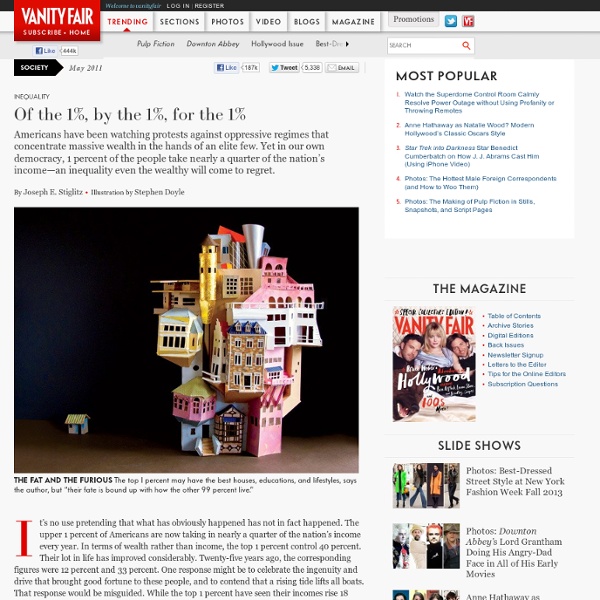 It’s no use pretending that what has obviously happened has not in fact happened. The upper 1 percent of Americans are now taking in nearly a quarter of the nation’s income every year. In terms of wealth rather than income, the top 1 percent control 40 percent. Economists long ago tried to justify the vast inequalities that seemed so troubling in the mid-19th century—inequalities that are but a pale shadow of what we are seeing in America today. Some people look at income inequality and shrug their shoulders. First, growing inequality is the flip side of something else: shrinking opportunity. Third, and perhaps most important, a modern economy requires “collective action”—it needs government to invest in infrastructure, education, and technology. None of this should come as a surprise—it is simply what happens when a society’s wealth distribution becomes lopsided. Economists are not sure how to fully explain the growing inequality in America.

'Occupy': A catalyst for change? - Inside Story The 'Occupy' movement is holding gatherings around the world as protesters meet in the financial centres of several cities. The movement's central site, United for Global Change, says 951 cities in 82 countries will participate in rallies. Dozens of protesters were arrested in New York as thousands marched through the city's financial district before moving on to Times Square. Protests were also held elsewhere in the US and Canada, notably in Washington DC, the US capital. And several cities across the world - from Tokyo to Alaska via London, Frankfurt and Washington - held demonstrations in a show of solidarity with the rallies that began last month in New York. But does the movement have a defined agenda?

Outsourced Call Centers Return, To U.S. Homes about | Gathering &amp;#039;11 Europe's Zero-Sum Dilemma EUROPE’S DEBT crisis is threatening a political order that has been built up over the course of more than a half century. It is still entirely possible—indeed likely—that the European single currency will not survive the crisis. Angela Merkel, the German chancellor, has predicted that if the euro collapses, the European Union will crumble with it. The destruction of the EU would, in turn, remove the organization around which postwar European politics has been constructed. Even if both the EU and the single currency survive, the current crisis is likely to extract an economic and political price that makes a mockery of many of the original hopes invested in the European Union.

Occupy Wall Street to a global intifada? On Wednesday, October 5, I joined thousands of others and marched down lower Manhattan to 'occupy Wall Street'. Seeing thousands of people marching peacefully together under the banner of occupying struck me in profound and contradictory ways. The marches and occupation were orderly and disciplined. There was neither a mob mentality, nor a sense of anarchy, nor any violence. No one crushed anyone else, in fact people apologised if they so much as tread over each other's toes. Everyone obeyed the flow determined by the New York Police Department (NYPD): Walking on sidewalks behind barricades, congregating in open spaces of parks, and for the most part not standing on streetlights, signs or scaffolding to get a bird's eye view. The feeling was certainly one of dispossession - targeted at Wall Street, at corporate America, at rising unemployment, at taxation inequalities, at rising student loans, at seemingly out-of-control military spending. What kind of occupation? Defining occupation

How can Scotland cope with China's salmon demands? 10 September 2012Last updated at 19:03 ET By Anne-Marie Bullock Producer, Costing the Earth: Chinese Salmon The Scottish salmon industry had a major boost after China opened its doors to imports - but with the government setting a target to increase salmon production by 50% by 2020, local communities are divided over whether the financial rewards outweigh environmental concerns. "Thousands of people come from all over the world to look at this landscape. This is the one place in the world you shouldn't put a factory fish farm." Roc Sandford is the owner of the island of Gometra in the Inner Hebrides - one of the wildest and undeveloped parts of the UK. To get there you have to travel to Mull, summon the small foot ferry to the island of Ulva and then either commission a boat, walk a five mile causeway or, I suppose, swim. Off the north shore of the island, in Loch Tuath, an application has been made for a fish farm by The Scottish Salmon Company.

Occupy Wall Street: The Most Important Thing in the World Now I was honored to be invited to speak at Occupy Wall Street on Thursday night. Since amplification is (disgracefully) banned, and everything I say will have to be repeated by hundreds of people so others can hear (a k a “the human microphone”), what I actually say at Liberty Plaza will have to be very short. With that in mind, here is the longer, uncut version of the speech. We Recommend The youth and those who are not so young participating in Occupy Wall Street deserve support, not scorn. Does the Occupy Wall Street movement, which has now spread from lower Manhattan to places as far flung as Washington, D.C. and San Francisco, signal a new beginning for the left? Since they can no loner ignore the occupation, the mainstream media has decided to mock and dismiss it instead. About the Author Naomi Klein Naomi Klein is an award-winning journalist, syndicated columnist, fellow at The Nation Institute and author of the... Also by the Author I love you. That slogan began in Italy in 2008.

6 Things Rich People Need to Stop Saying All of a sudden, it's like you can't make huge amounts of money without people getting all pissed off about it. And it's only going to get worse -- with the election coming up and the weather getting warmer, this whole "Occupy" movement is probably going to come back strong. The 1 percent will feel even more besieged than before. "What the hell?" #6. "The amount that I have to reinvest in my business and feed my family is more like $600,000 ... and so by the time I feed my family, I have maybe $400,000 left over ..." -- Congressman John Fleming Pictured here with his poverty. "It is hard to ask more of households making $250,000 or $300,000 a year. -- Senator Chuck Schumer What They Think They're Saying: "Come on, we're all in this together! What We Hear: "When my family's Aruba vacation went over budget, that was exactly like you being unable to afford medication for your child's excruciating chronic illness!" Getty"Look at how tiny my yacht is!" Getty"This stuff? #5. -- Wayne Allyn Root #4.

The 'Last Place Aversion' Paradox If ever Americans were up for a bit of class warfare, now would seem to be the time. The current financial downturn has led to a $700 billion tax-payer-financed bank bailout and an unemployment rate stuck stubbornly above nine percent. Onto this scene has stepped the Occupy Wall Street (OWS) movement, which seeks to bring together a disparate group of protesters united in their belief that the current income distribution is unfair. “The one thing we all have in common is that We are the 99% that will no longer tolerate the greed and corruption of the 1%,” says their website. Or, maybe not. Support for redistribution, surprisingly enough, has plummeted during the recession. What might explain this trend? Our recent research suggests that, far from being surprised that many working-class individuals would oppose redistribution, we might actually expect their opposition to rise during times of turmoil – despite the fact that redistribution appears to be in their economic interest.

Cashmere trade threat to snow leopards 23 July 2013Last updated at 13:46 GMT By Melissa Hogenboom Science reporter, BBC News Snow leopards are critically endangered as their natural prey has declined The global demand for cashmere is threatening endangered snow leopards, according to a new report. Domestic cashmere goats in parts of Central Asia have almost tripled in the last 20 years to fuel cashmere demand. The goats are encroaching on the natural habitats of the snow leopard and their natural prey. The authors of the paper, published in Conservation Biology, say that other endangered animals are also at risk. These include herbivores which compete for the same resources as the goats, such as the antelope Saiga tatarica, the Tibetan chiru (Pantholops hodgsonii) and the Himalayan bharal (Pseudois nayaur) also known as the blue sheep. As the snow leopards' habitats converge with domestic goats, the decline of wild prey can increasingly lead the leopards to hunt the goats. Continue reading the main story Mountain killer

The End of Strategy &amp;laquo; how to save the world I spent much of my professional career developing and implementing Strategic Plans. The hardest part of this was that most people didn’t (and still don’t) know what ‘strategy’ is: the choice among alternative courses of action, not the determination of goals and objectives. It’s about how, not about what. Most of the ‘strategic’ plans I was given (by bosses, and by clients I was advising) were not plans at all, but rather targets. I began to realize that my bosses and clients didn’t have the foggiest idea how to achieve these targets, which is why they just set them and left it up to me to achieve them. This failure of understanding and setting strategy seems endemic in all kinds of organizations today. The middle column of the chart above shows how strategic planning should work, but in most organizations it does not work at all. We would be wise, I think, to emulate these Natural Organizations now, to the extent we can do so. But old habits die hard. It’s time we tried it.

Not What the Doctor Ordered: 20 Million Could Lose Employer Coverage In all the hand-wringing over the last two months for Obamacare by “liberal” apologists, little has actually been said about the actual effects of the law. True, whether or not Obamacare is beneficial has little if anything to do with its constitutionality. (And the actual Constitutional issues involved, however valid, have little to do with the cynical politics behind the Supreme Court’s right-wing block in the case.) Hence one story that caught my eye in March: “20 million could lose employer coverage under Obama health care overhaul.” As many as 20 million Americans could lose their employer-sponsored coverage in 2019 under the health care legislation signed into law by President Obama in March 2010… The CBO’s most optimistic estimate, which the federal agency says is subject to a “tremendous amount of uncertainty,” is that 3 million to 5 million could lose their employer health coverage each year from 2019 through 2022.