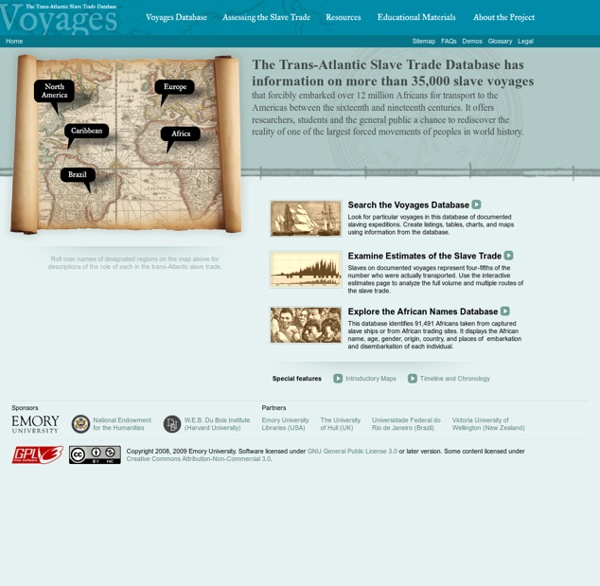 Roll over names of designated regions on the map above for descriptions of the role of each in the trans-Atlantic slave trade. The North American mainland played a relatively minor role in the trans-Atlantic slave trade. Its ports sent out less than five percent of all known voyages, and its slave markets absorbed less than four percent of all slaves carried off from Africa. An intra-American trade in slaves – originating in the Caribbean - supplied additional slaves, however. This region was exceptional in the Americas in that a positive rate of natural population growth began relatively early, thus reducing the dependence of the region on coerced migrants. The Caribbean was one of the two major broad regional markets for slaves from Africa. Brazil was the center of the slave trade carried on under the Portuguese flag, both before and after Brazilian independence in 1822, and Portugal was by far the largest of the national carriers.

untitled Arcinsys Niedersachsen and Bremen – the archival information system of the Niedersachsen Federal State Archives and the State Archive Bremen and other archives in Niedersachsen and Bremen. Developed in cooperation with the Federal State of Hessen. It is a common system for users and employees and it covers the full range of offers and functions of the archives. Without registration File title, regesta of charters, find information on archival items. For President Obama, a Complex Calculus of Race and Politics Pete Souza/The White House Mr. Obama and Ruby Bridges Hall, the first black child to integrate an elementary school in the South, admiring the Norman Rockwell painting of her marching into school, which he hung outside the Oval Office.

Primary Sources on the Web: Finding, Evaluating, Using This brief guide is designed to help students and researchers find and evaluate primary sources available online. Keep in mind as you use this website, the Web is always changing and evolving. If you have questions, please consult your instructor or librarian. Primary sources are the evidence of history, original records or objects created by participants or observers at the time historical events occurred or even well after events, as in memoirs and oral histories.

Summary of The Interesting Narrative of the Life of Olaudah Equiano, or Gustavus Vassa, the African. Written by Himself. Vol. I. Olaudah Equiano was born in 1745 in Eboe, in what is now Nigeria. When he was about eleven, Equiano was kidnapped and sold to slave traders headed to the West Indies. Though he spent a brief period in the state of Virginia, much of Equiano's time in slavery was spent serving the captains of slave ships and British navy vessels. One of his masters, Henry Pascal, the captain of a British trading vessel, gave Equiano the name Gustavas Vassa, which he used throughout his life, though he published his autobiography under his African name. In service to Captain Pascal and subsequent merchant masters, Equiano traveled extensively, visiting England, Holland, Scotland, Gibraltar, Nova Scotia, the Caribbean, Pennsylvania, Georgia, and South Carolina.

Beinecke Rare Book & Manuscript Library Hundreds of commercial and amateur photographers recorded imagery during the tumultuous Mexican Revolution (Revolución Mexicana), which began in 1910 with an uprising led by Francisco I. Madero (1873-1913) against Porfirio Díaz (1830-1915), the President of Mexico. Many of the photographs were printed on postcard stock and marketed by commercial photographers to soldiers and civilians on either side of the international border between Mexico and the United States. Other photographic postcards in this collection created by amateur photographers document their personal experience in the conflict. Images include United States artillery, cavalry, and infantry, and Mexican federal and revolutionary soldiers, as well as individuals in military camps, refugee camps, and prisoner of war camps.

untitled The “pivot-to-video” moment of a few years back devastated writers everywhere with mass layoffs as companies scrambled to attract projected millions of nonexistent viewers. It’s a story about predatory media monopolies and the proliferation of news, documentary, and opinion video content online. While the sheer amount of video can feel overwhelming, we might remember that people have been getting their news from screens for well over a hundred years. First came the newsreels. Thousands were produced from the end of the 19th century into the 1960s, when TV became the dominant screen of choice. These were ephemeral, often fragmentary films, not usually preserved in the way of great cinema. Affirmative Action - A Complicated Issue for Asian-Americans Michael Stravato for The New York Times What is the Asian-American identity? Lesley Varghese, top left, teaches the subject at the University of Texas, Austin. Students include, clockwise from Ms.

A timeline of wars of the United States For most of its nearly two and a half century history, the United States has been at war. Some of these wars, like the American Civil War, were terrible and bloody and well-remembered. Others, like the Powder River War, were small and mostly forgotten. HIAF 201 Introduction -- History 201 introduces undergraduates to the early history of the peoples of Africa, with emphasis on "Black" Africa south of the Sahara. The course begins with the origins of African civilizations in the later "stone age" (ca. 25,000 BCE) and runs through the late-eighteenth-century years of Africa's most intensive exports of slaves. It concentrates on people and civilizations indigenous to Africa.

Books in the ether: online libraries and resources — Kat Hill historian As academics and educators, we live for books, the physical, material world of shelves, spines and well-thumbed pages. But with alarming rapidity, the COVID-19 pandemic has ripped away access to libraries, archives and museums as institutions shut their doors to halt the spread of the virus. This obviously presents unique challenges to researchers, educators and students alike. The good news is there are many resources available online and the positive is that many publishers have decided to make resources free and open access. Why Don’t Black Leaders Demand More of the President? Maps of places you’ve never been, maps of paper routes, maps of desktops: artists and writers conjure directions for heretofore uncharted Xanadus. Maps are their own narratives of space. Who draws them, and who names them, holds immense power to determine not just Where You Are, but How Things Are. Subjective or empirical experience in conflict with the map’s own assertions can leave you nowhere, or somewhere unknown, as anyone who has tried to navigate, say, Venice by map will know. Have they purposefully drawn it up to bear no resemblance to its actual layout in order to confuse visitors into spending more money on alcohol and sequined masks?

Black Lives Matter Movement Demonstrators filled the Mall of America rotunda and chanted “Black lives matter” to protest police brutality, Saturday, Dec. 12, 2014, in Bloomington, Minn. The group Black Lives Matter Minneapolis had more than 3,000 people confirm on Facebook that they would attend. Attendance figures weren’t immediately available. (AP Photo/The Star Tribune, Aaron Lavinsky) United Hood March protestors head towards fourth avenue after congregating in front of the Seattle Police Department Headquarters during the first United Hood March in downtown Seattle Friday, June 19, 2015. People raise their hands in the middle of the street as police wearing riot gear move toward their position trying to get them to disperse Monday, Aug. 11, 2014, in Ferguson, Mo. Slavery Images The 1,280 images in this collection have been selected from a wide range of sources, most of them dating from the period of slavery. This collection is envisioned as a tool and a resource that can be used by teachers, researchers, students, and the general public - in brief, anyone interested in the experiences of Africans who were enslaved and transported to the Americas and the lives of their descendants in the slave societies of the New World. We would like to emphasize that little effort is made to interpret the images and establish the historical authenticity or accuracy of what they display. To accomplish this would constitute a major and different research effort. Individual users of this collection must decide such issues for themselves. Copyright 2015, Virginia Foundation for the Humanities and University of Virginia

The Trans-Atlantic Slave Trade Database contains scholastic research drawing upon data from around the Atlantic world. by nda_librarian May 5