Marie Colvin. Marie Catherine Colvin (January 12, 1956 – February 22, 2012) was an award-winning American journalist who worked for the British newspaper The Sunday Times from 1985 until her death. 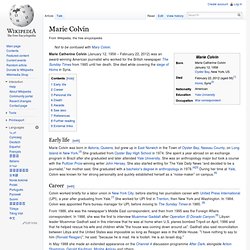 She died while covering the siege of Homs in Syria. Early life[edit] Career[edit] Colvin worked briefly for a labor union in New York City, before starting her journalism career with United Press International (UPI), a year after graduating from Yale.[7] She worked for UPI first in Trenton, then New York and Washington. In 1984, Colvin was appointed Paris bureau manager for UPI, before moving to The Sunday Times in 1985. [8] Specialising in the Middle East, she also covered conflicts in Chechnya, Kosovo, Sierra Leone, Zimbabwe, Sri Lanka and East Timor.

In 2011, while reporting on the Arab Spring in Tunisia, Egypt and Libya, she was offered an opportunity to interview Muammar Gaddafi, along with two other journalists that she could nominate. Personal life[edit] War correspondent. A war correspondent is a journalist who covers stories firsthand from a war zone. 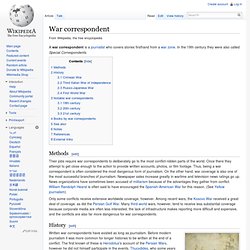 In the 19th century they were also called Special Correspondents. Methods[edit] Their jobs require war correspondents to deliberately go to the most conflict-ridden parts of the world. Once there they attempt to get close enough to the action to provide written accounts, photos, or film footage. Thus, being a war correspondent is often considered the most dangerous form of journalism. Only some conflicts receive extensive worldwide coverage, however. History[edit] Written war correspondents have existed as long as journalism. The first modern war correspondent is said to be Dutch painter Willem van de Velde, who in 1653 took to sea in a small boat to observe a naval battle between the Dutch and the English, of which he made many sketches on the spot, which he later developed into one big drawing that he added to a report he wrote to the States General.

The essential global news network. News agency. Reuters, Bonn 1988 A news agency is an organization that gathers news reports and sells them to subscribing news organizations, such as newspapers, magazines, and radio and television broadcasters. 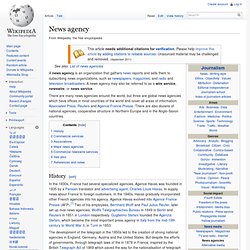 A news agency may also be referred to as a wire service, newswire, or news service. There are many news agencies around the world, but three are global news agencies which have offices in most countries of the world and cover all areas of information: Associated Press, Reuters and Agence France-Presse. There are also dozens of national agencies, cooperative structure in Northern Europe and in the Anglo-Saxon countries. 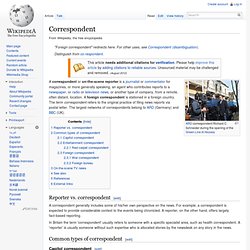 Reporter vs. correspondent[edit] A correspondent generally includes some of his/her own perspective on the news. For example, a correspondent is expected to provide considerable context to the events being chronicled. A reporter, on the other hand, offers largely fact-based reporting. In Britain the term 'correspondent' usually refers to someone with a specific specialist area, such as health correspondent.

Common types of correspondent[edit] Capitol correspondent[edit] A capitol correspondent is a correspondent who reports from headquarters of government. Wadah Khanfar- A historic moment in the Arab world (TED) Part 1. Human Journalism – best articles from periodismohumano.com » The first 40 at Sol. By Juan Luis Sánchez / Translation: Nerea Alonso They don’t want to be center stage “we just did one gesture that broke the collective mental block”“The policeman that let us sleep here on Sunday must be freaking out now!” 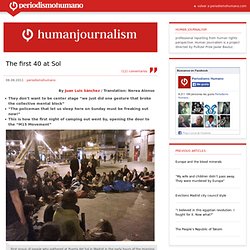 This is how the first night of camping out went by, opening the door to the “M15 Movement” First group of people who gathered at Puerta del Sol in Madrid in the early hours of the morning of May 15th to 16th 2011 (@toofasttofall) Puerta del Sol five days later, on Friday May 20th, with at least 28.000 people. (cc J. Nobody summoned officially the first 40 people that spent the night at Puerta del Sol. “I wasn’t going to go to the demonstration because I’m kind of fed up with demonstrations”, says Julio, fictional name for someone who appears in that video for History.

One of the groups that joined them was Roberto’s, who was sitting with his banner in the middle of the square. Two banners hang on a string in Puerta del Sol (Javier Bauluz) Hands up at Puerta del Sol. The Florida keys. The Florida primary is always an important point in the presidential nomination process in the US. 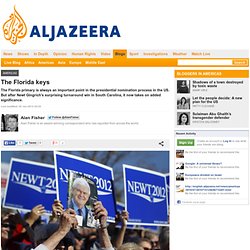 But after Newt Gingrich’s surprising turnaround win in South Carolina, it now takes on added significance. It is here – in what will be a key battleground state in November’s general election – that the sudden emergence of the former speaker of the US House of Representatives as a genuine contender may be validated. Or it will be where Mitt Romney will try to rebuild the aura of inevitability around his nomination, which was so dramatically punctured just a week ago. For the moment, the advantages seem to stack up with Romney. His campaign is large, well co-ordinated and very well funded.