VideoJournalism – Thinking visually. Firstdraftnews.com - Your guide to navigating eyewitness media, from discovery to verification. Lessons to learn from Trinity Mirror's latest regional sales figures. If anyone wants to understand why Trinity Mirror is turning away from newsprint to digital-only then take a look at the latest set of circulation statistics for the publisher’s regional titles. 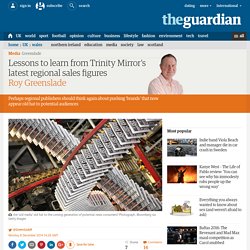 All of them registered substantial year-on-year falls, November 2014 compared to November 2013, according to the official ABC audit. Yet, once digital editions are added to the totals, four did manage modest month-on-month, November compared to October, growth. Contemplate first the double-digit print declines over the course of a year for 10 titles. Birmingham Mail (-17.8%), Birmingham’s Sunday Mercury (-18.2%), South Wales Echo (-18%), Wales on Sunday (-17%), Liverpool Echo (-13.5%), Western Mail (-13.2%), Coventry Telegraph (112.7%), Huddersfield Examiner (-12.3%), Newcastle Chronicle (-12%) and Newcastle Journal (-10.3%). These figures, for newspapers selling round about 20,000 apiece (with the exception of the 68,000-plus MEN), indicate a clear direction of travel.

How to be a Community Radio Station. Community Radio Toolkit - A place for community radio people to learn, talk, and share. Bringing Hyper-Local, Citizen-Driven News to South Africa. Is hyper-local journalism interesting enough to engage its own audience? 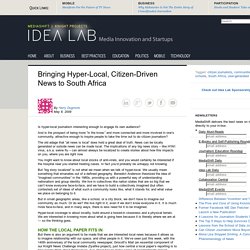 And is the prospect of being more “in the know,” and more connected and more involved in one’s community, attractive enough to inspire people to take the time out to do citizen journalism? The old adage that “all news is local” does hold a great deal of truth. News can be locally generated or outside news can be made local. The implications of any big news story – like H1N1 virus, a.k.a. swine flu – can almost always be localized to create stories about how this impacts on you, where you are right now. You might want to know about local stocks of anti-virals, and you would certainly be interested if the hospital near you started treating cases. But “big story localized” is not what we mean when we talk of hyper-local. But in small geographic areas, like a school, or a city block, we don’t have to imagine our community as much. 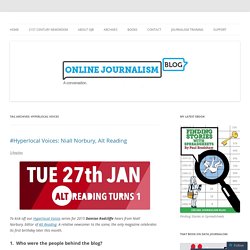 From time to time we also check in again on some of the more established players to see what’s changed and how their operation is evolving. One such example is Brixton Blog in South West London. Originally established by Zoe Jewell in 2010, the site has evolved considerably since, launching the Brixton Bugle newspaper in July 2012 (10,000 copies of which are distributed each month) and working with The Carnegie UK Trust as part of their Neighbourhood News initiative by providing structured work placements for local trainees.

In 2013 The Brixton Blog and Bugle were shortlisted in the ‘Innovation of the Year’ category at the British Journalism Awards, alongside Sun Plus, Guardian Witness and Independent Voices in Danger projects. The team are currently in the middle of a crowdfunder campaign designed to raise money for a part-time news editor. 1. 2. 3. Rhondda People. Mmunity journalism in the UK: the emerging evidence base. By Damian Radcliffe | 9th Sep 2015 Today Cardiff University’s Centre for Community Journalism is hosting a one-day ideas exchange, in partnership with Nesta, on the topic: ‘What next for community journalism?’ 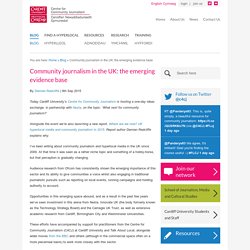 Alongside the event we’re also launching a new report, Where are we now? UK hyperlocal media and community journalism in 2015. Report author Damian Radcliffe explains why. I’ve been writing about community journalism and hyperlocal media in the UK since 2009. Audience research from Ofcom has consistently shown the emerging importance of this sector and its ability to give communities a voice whilst also engaging in traditional journalistic pursuits such as reporting on local events, running campaigns and holding authority to account.