Allan Nairn. Allan Nairn (born 1956) is an award-winning American investigative journalist who became well known when he was imprisoned by Indonesian military forces under United States-backed strongman Suharto while reporting in East Timor. 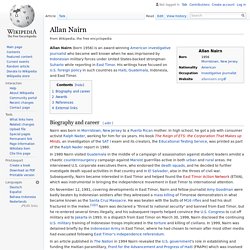 His writings have focused on U.S. foreign policy in such countries as Haiti, Guatemala, Indonesia, and East Timor. Biography and career[edit] Nairn was born in Morristown, New Jersey to a Puerto Rican mother. In high school, he got a job with consumer activist Ralph Nader, working for him for six years. His book The Reign of ETS: the Corporation That Makes up Minds, an investigation of the SAT I exam and its creators, the Educational Testing Service, was printed as part of the Ralph Nader report in 1980. In 1980 Nairn visited Guatemala in the middle of a campaign of assassination against student leaders amidst a chaotic counterinsurgency campaign against Marxist guerrillas active in both urban and rural areas. A June 27, 2014 report indicated that Mr. Paul Jay. This article is about the television journalist. 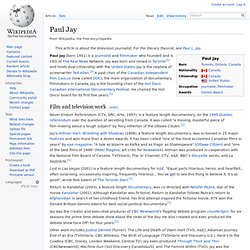 For the literary theorist, see Paul L. Jay. Paul Jay (born 1951) is a journalist and filmmaker who founded and is CEO of The Real News Network. Jay was born and raised in Toronto[1] and holds dual-citizenship with the United States. Jay is the nephew of screenwriter Ted Allan.[2] A past chair of the Canadian Independent Film Caucus (now called DOC), the main organization of documentary filmmakers in Canada, Jay is the founding chair of the Hot Docs Canadian International Documentary Festival.

Film and television work[edit] Never-Endum Referendum (CTV, SRC, Arte, 1997), is a feature length documentary, on the 1995 Quebec referendum over the question of seceding from Canada. Lost in Las Vegas (2001) is a feature length documentary for A&E. Jay is currently the main producer on his news network The Real News. Fear and Loathing in Modern Media: Hunter S. Thompson on Journalism, Politics, and the Subjective. By Maria Popova “There is no such thing as Objective Journalism. 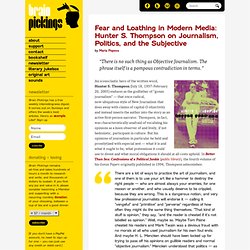 The phrase itself is a pompous contradiction in terms.” An iconoclastic hero of the written word, Hunter S. Thompson (July 18, 1937–February 20, 2005) endures as the godfather of “gonzo journalism” — that once-radical, now-ubiquitous style of New Journalism that does away with claims of capital-O objectivity and instead inserts the author into the story as an active first-person narrator.

Thompson, in fact, was characteristically unafraid of vocalizing his opinions as a keen observer of and lively, if not hedonistic, participant in culture. There are a lot of ways to practice the art of journalism, and one of them is to use your art like a hammer to destroy the right people — who are almost always your enemies, for one reason or another, and who usually deserve to be crippled, because they are wrong.

Page from 'Gonzo: A Graphic Biography of Hunter S. So much for Objective Journalism. Donating = Loving Share on Tumblr. 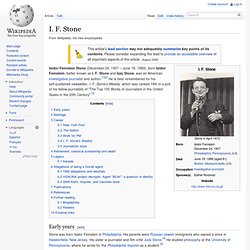 F. Stone and Izzy Stone, was an American investigative journalist and author.[1][2] He is best remembered for his self-published newsletter, I. F. Stone's Weekly, which was ranked 16th in a poll of his fellow journalists of "The Top 100 Works of Journalism in the United States in the 20th Century".[3] Early years[edit] Marriage[edit] In 1929, he married Esther Roisman, who later served as his assistant at I. Career[edit] New York Post[edit] Stone moved to the New York Post in 1933 and during this period supported Franklin Roosevelt and the New Deal. The Nation[edit] After leaving the New York Post in 1939, Stone became associate editor and then Washington editor of The Nation.[2] His next book, Business as Unusual (1941), was an attack on the country's failure to prepare for war.

Work for PM[edit] They have been kicked around as Jews and now they want to live as Jews.