Nine Women In The Room: A Music Writers Roundtable : The Record. Our roundtable advises music writers to find a mentor and read the work of other women writing about music. 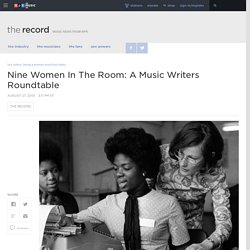 Erich Auerbach/Getty Images hide caption itoggle caption Erich Auerbach/Getty Images Our roundtable advises music writers to find a mentor and read the work of other women writing about music. Erich Auerbach/Getty Images Yesterday we gathered nine of the preeminent music writers in the country in an online roundtable. We've been collecting responses to a questionnaire about being a woman and a musician since the spring, and we're realizing that women who work in and around the business — but don't pay the bills by playing — face similar challenges. The following conversation was edited for grammar and formatted to make sense in a linear fashion. Cortney Harding [Music Editor, Billboard]: I've had some awesome mentors. 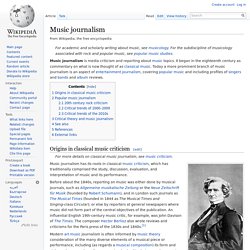 For the subdiscipline of musicology associated with rock and popular music, see popular music studies. Origins in classical music criticism[edit] Music journalism has its roots in classical music criticism, which has traditionally comprised the study, discussion, evaluation, and interpretation of music and its performance. Before about the 1840s, reporting on music was either done by musical journals, such as Allgemeine musikalische Zeitung or the Neue Zeitschrift für Musik (founded by Robert Schumann), and in London such journals as The Musical Times (founded in 1844 as The Musical Times and Singing-class Circular); or else by reporters at general newspapers where music did not form part of the central objectives of the publication. An influential English 19th-century music critic, for example, was John Davison of The Times.

10 Women Music Writers To Read Now : The Record. A woman walks past a pile of books at the Frankfurt Book Fair in 2008. 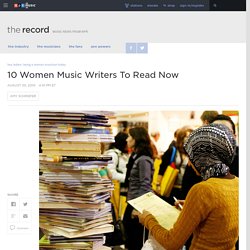 Periodicals like Rolling Stone and websites like Pitchfork Media — which have largely usurped print publications — tend to discuss the appearances of women more often than those of men, take their music less seriously, stereotype them, and incorrectly attribute their successes to male coworkers. These double standards govern how women and men are viewed throughout our society, and music journalism is but one way they manifest. Music criticism and reporting are products of cultural gender roles and consumer demands. But when this culture combines with mainstream publications’ largely male staff and the sexism already prevalent in the music business, critics unwittingly carry on tropes that they might have the power to ameliorate. “Madonna Goes All the Way” (1984) “Look Who’s Hot!” “Booty Camp! Endnotes. 33 Women Music Critics You Need to Read. Ideally, you wouldn’t need a list like this, which might sound as patronizing as a “women in rock” magazine issue, but like most other professions, music journalism is still mostly a sausage fest. 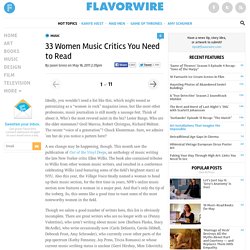 Think of about it. Who’s the most revered saint in the biz? Lester Bangs. Who are the elder statesmen? Greil Marcus, Robert Christgau, Richard Meltzer. A sea change may be happening, though. Though we salute a good number of writers here, this list is obviously incomplete. And in the end, there are actually hundreds of women music journalists that you should be reading. Stacey Anderson Though her background includes writing for NBC-New York and Spin, Anderson’s rightfully best known for her current going-on-three-years stint as Senior Associate Editor at the Village Voice, which also includes the sometimes-thankless-but-vital job as listings editor, not to mention brilliant pieces like her peek into Woody Allen’s music career, including a rare interview with the recluse himself. Daphne Brooks. Oh, the Unbelievable Shit You Get Writing About Music as a Woman.