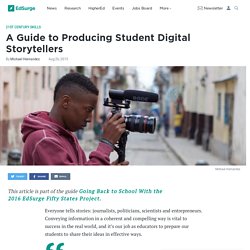 Conveying information in a coherent and compelling way is vital to success in the real world, and it’s our job as educators to prepare our students to share their ideas in effective ways. We used to do this with papers, posters and dioramas, but digital tools at our disposal now allow students to create authentic stories that allow for audience interaction and a wider impact on the world.

Here are some tips for transforming storytelling assignments in your classroom, no matter what subject or grade level you teach. What is Digital Storytelling? Digital storytelling uses video, audio, social media, blogging and other tools to convey ideas and information effectively. Requires critical thinking: Creating an interdisciplinary product from scratch requires high level thinking skills like evaluating evidence, editing and curation, and production timelines.

How to Educate Digital Storytellers. Dzar Al Banna on Twitter: "Whoever controls the media controls the mind - jim morrison #CitizenJournalism @ACFFest 2014... Fox ‘News’ And Bill O’Reilly Get Hammered By High School Students For Their Lack Of Journalistic Ethics. A high school class in Vermont decided to study and break down a Fox “News” segment presented by Bill O’Reilly, and then they made a video to report the results they found. 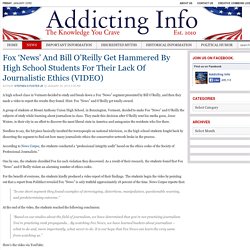 Hint: Fox “News” and O’Reilly get totally owned. A group of students at Mount Anthony Union High School, in Bennington, Vermont, decided to make Fox “News” and O’Reilly the subjects of study while learning about journalism in class. They made this decision after O’Reilly sent his media goon, Jesse Waters, to their city in an effort to discover the most liberal state in America and antagonize the residents who live there. Needless to say, the hit piece basically insulted the townspeople on national television, so the high school students fought back by dissecting the segment to find out how many journalistic ethics the conservative network broke in the process.

According to News Corpse, the students conducted a “professional integrity audit” based on the ethics codes of the Society of Professional Journalists.” The Spectacle of Illiteracy and the Crisis of Democracy. This is an excerpt from Zombie Politics and Culture in the Age of Casino Capitalism, by Henry Giroux. 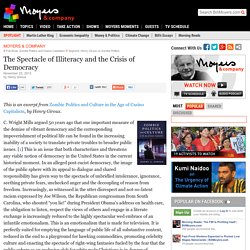 C. Wright Mills argued 50 years ago that one important measure of the demise of vibrant democracy and the corresponding impoverishment of political life can be found in the increasing inability of a society to translate private troubles to broader public issues. [1] This is an issue that both characterizes and threatens any viable notion of democracy in the United States in the current historical moment. To revitalize journalism, give it away — Citizen Journalism. That’s the approach of Mosaic, a new science site that’s affixing a Creative Commons license to its longform For the last few months, word of British digital science journalism upstart Mosaic has been circulating quietly, as a roster of all-star science journalists have been talking about taking reporting trips for the longform publication. 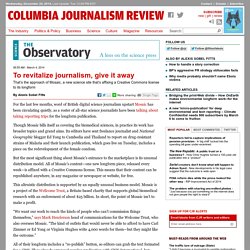 Though Mosaic bills itself as covering the biomedical sciences, in practice its work has broader topics and grand aims. Its editors have sent freelance journalist and National Geographic blogger Ed Yong to Cambodia and Thailand to report on drug-resistant strains of Malaria and their launch publication, which goes live on Tuesday, includes a piece on the redevelopment of the female condom. Community Journalism — Cardiff University. 0:09Skip to 0 minutes and 9 secondsAcross Britain and around the world, the internet is allowing new forms of community journalism and hyperlocal websites to flourish. 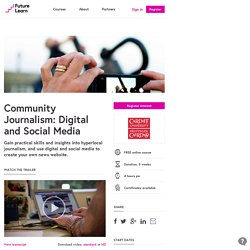 Often, these new services are in areas where traditional newspapers no longer exist. It's an exciting new area of media development. I'm Richard Sambrook, Professor of Journalism here at Cardiff University, where we have a Centre for Community Journalism which studies and supports these new services. Journalist. Interview with Assist. Prof. Dr. Lemi Baruh about research project COSMIC — Citizen Journalism. Everything that happens in the world daily directly depends on the participation of every citizen. 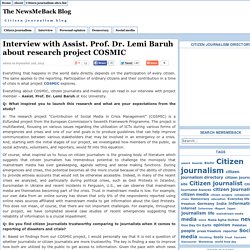 The same applies to the reporting. Participation of ordinary citizens and their contribution in a time of crisis is what project COSMIC explores. Everything about COSMIC, citizen journalists and media you can read in our interview with project member – Assist. Prof. Dr. What’s New in Digital and Social Media Research: The realities of citizen journalism, and new possibilities for transparency — Citizen Journalism. Editor’s note: There’s a lot of interesting academic research going on in digital media — but who has time to sift through all those journals and papers? 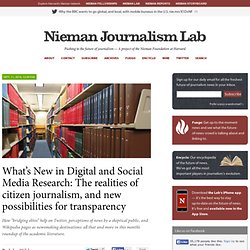 Our friends at Journalist’s Resource, that’s who. JR is a project of the Shorenstein Center on Media, Politics and Public Policy at the Harvard Kennedy School, and they spend their time examining the new academic literature in media, social science, and other fields, summarizing the high points and giving you a point of entry. Here, John Wihbey sums up the top papers in digital media and journalism this month.

Recent papers from academe have continued to highlight tensions over letting citizens into the news process, as well as the need to be more open and transparent with the public. Many of the papers below have insights on related themes. Here is a sampling of recent academic studies: The authors analyze results from an experiment embedded in a web survey conducted via Mechanical Turk, which yielded 184 responses. #Ferguson Shows Why Citizen Journalism Is Still Critical. If you’ve been keeping up with the news from Ferguson, Missouri, chances are a lot of the updates and photos are coming from individuals who aren’t journalists, posting live video feeds from their cell phones. 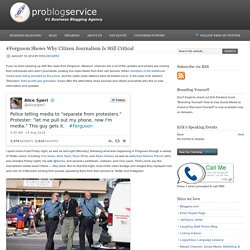 When members of the traditional media were being arrested by the police, and the cable news stations were all kicked out or, in the case of Al Jazeera Television, fired at with gas grenades, it was often the alternative news sources and citizen journalists who fed us new information and updates. I spent most of last Friday night, as well as last night (Monday), following what was happening in Ferguson through a variety of Twitter users, including Vice News, Alice Speri, Ryan Reilly, and Adam Serwer, as well as alderman Antonio French (who was arrested Friday night), his wife @Senka, and several LiveStream, Ustream, and Vine users. That’s not to say the mainstream media wasn’t there — they were. Citizen journalism Archives - Pro Blog Service. Update: Judge Marco A. 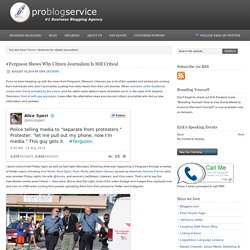 Hernandez has since clarified his ruling on this matter, and stated that his ruling was only meant to apply to Crystal Cox, and not all bloggers. Read my latest blog post for the rest of the story. A U.S. district court just ruled that bloggers — at least bloggers in Oregon — are not part of the media, and therefore, not protected by Oregon’s media shield laws. As a citizen journalist, this scares the bejeezus out of me. If you’re a blogger of any kind, it should worry you too. I’ve been clamoring for years that bloggers are citizen journalists. Opening The Gates To Citizen Journalism — Citizen Journalism. It can all start with a tweet. 140 characters are more than enough to be news-breaking. 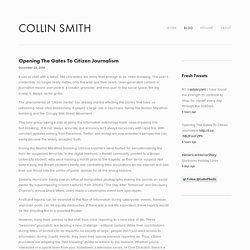 The user’s credentials no longer really matter, only the lead and their reach. User-generated content in journalism means everyone is a creator, promoter, and end-user. In the social space, the big scoop is always up for grabs. The phenomenon of “citizen media” has already started affecting the stories that have us refreshing news sites obsessively. It played a large role in Hurricane Sandy, the Boston Marathon bombing and the Occupy Wall Street Movement. Human Rights Video. Tips for engaging and empowering news communities — Citizen Journalism. Credit: By James Cridland on Flickr. Some rights reserved. With the rise of so-called 'citizen journalism', a growing role for journalists is to provide their communities with the ability to tell their own story, with news hubs providing aggregation and a platform for those who have been under-reported.

Solana Larsen, managing editor of Global Voices Online and Hannah Waldram, community coordinator for news at The Guardian, provided both a global and hyperlocal perspective on how to approach community journalism at the Community Journalism Conference at Cardiff University on Wednesday (16 January). Give people a voice Global Voices helps to translate and publish work from bloggers and citizen journalists in parts of the world which attract little coverage in international media.

As the world watches Syria this week, ethics questions will focus on how critically the media are thinking about the purpose and extent of possible military intervention, as well as issues of credibility, independence and context. But within Syria’s borders, groups of loosely and tightly organized citizens are focused on practicing their own journalism — and they’re developing a sophisticated set of ethics alongside. Last week I met with a group of three Syrians visiting the United States through a State Department leadership program. The Ethics of Curating Citizen Video - WITNESS BlogWITNESS Blog. This is the first in a series about developing guidelines for the ethical use of citizen video in human rights reporting. For the second post, concerning the ethics of publishing a video of sexual assault, click here.

For two years, WITNESS has curated citizen videos on the Human Rights Channel on YouTube, and before YouTube, on The Hub. We do that because it is no longer just trained human rights defenders who are using video to document abuse, but eyewitnesses, soldiers, detainees, humanitarian workers, perpetrators, and others—what some have termed the “Fifth Estate”—whose first-hand footage can provide valuable evidence of human rights abuses. But the decision to share that footage is not always easy. Code of Ethics. The National Press Photographers Association, a professional society that promotes the highest standards in visual journalism, acknowledges concern for every person's need both to be fully informed about public events and to be recognized as part of the world in which we live. Visual journalists operate as trustees of the public. Our primary role is to report visually on the significant events and varied viewpoints in our common world. Our primary goal is the faithful and comprehensive depiction of the subject at hand.

As visual journalists, we have the responsibility to document society and to preserve its history through images. Code-of-ethics-bookmark. Code-of-ethics. Code-of-ethics-poster. NPR-Ethics-Handbook-5.2.2012-Final-Edition. NYT_Ethical_Journalism_0904-1. Code of Ethics.