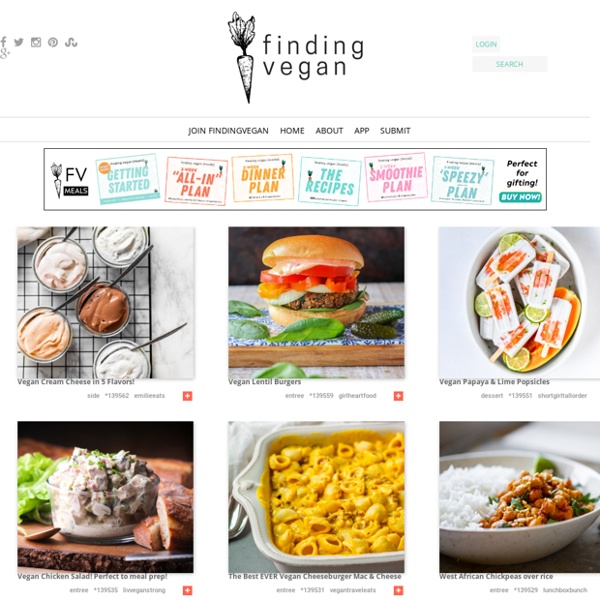 Vegan Shopping Guide It’s never been easier—or tastier!—to give your kitchen a cruelty-free makeover. Major health-food chains chock-full of animal-friendly fare are popping up everywhere, and mainstream supermarkets have become meccas for followers of meat- and dairy-free diets. The best part? With PETA’s shopping guide, you don’t have to strain your eyes! PETA combed the aisles of countless grocery stores, poring over ingredient labels, and compiled a list of vegan products for your shopping convenience.

Mexican Style Sweet Potatoes This recipe and photo were created by contributor Aylin Erman of Glow Kitchen. Learn more about Aylin and this recipe by checking out her accompanying post, and check out her Greatist bio on our About Page! Nothing beats a sweet potato in all its simple baked goodness, but they can get old fast if you don't switch it up. Humans are natural plant-eaters according to the best evidence: our bodies by Michael Bluejay • June 2002 • Updated December 2015 A fair look at the evidence shows that humans are optimized for eating mostly or exclusively plant foods, according to the best evidence: our bodies. We're most similar to other plant-eaters, and drastically different from carnivores and true omnivores.1,2,3 Those who insist that humans are omnivores, especially if their argument is based on canine teeth, would do well to look at what the evidence actually shows.

Pepsi's lawyers say Mountain Dew can dissolve a mouse (NaturalNews) While drinking Mountain Dew, have you ever seen (or perhaps felt on your tongue) a thick, jelly-like substance? Maybe you assumed the ingredients in the soda had gelled. According to Mountain Dew manufacturer Pepsi, you may have been ingesting some extra protein with your beverage in the form of a liquified rodent.An Illinois man is suing Pepsi, claiming he found a mouse in his can of Mountain Dew.

eat your vegetables curried potato hash with baby spinach Uh, it's cold. Not sure if anyone's mentioned that yet. WATCH: 70-Year-Old Raw Vegan Looks Decades Younger Annette Larkins is 70 years old, but you’d never know it by looking at her! Larkins credits the raw, vegan diet she has followed for the past 27 years for her youthful appearance and clean bill of health. She notes that people who are skeptical of her diet often assume she can thank good genes for her health and vitality.

My 40 Best Vegan Pumpkin Recipes (Updated!) This is one of my favorite round-up posts.. all things pumpkin! Vegan Pumpkin Recipes. From pumpkin cinnamon buns, pumpkin fritters and multiple versions of vegan pumpkin pie - these are all my pumpkin-y recipes. These recipe posts are both recent and very vintage. Savory and sweet. A few that are super healthy - and plenty that are quite decadent and sweet. Jamie Oliver: Victory as McDonald's stops using 'pink slime' in its burger recipe TV chef was disgusted to discover ammonium hydroxide was being used by McDonald's to convert fatty beef offcuts into a beef filler for burgers'Why would any sensible human being want to put ammonia-filled meat into their children's mouths? asked Jamie Oliver McDonald's denies its hand had been forced by TV campaign By Jill Reilly Updated: 11:05 GMT, 27 January 2012 After months of Jamie Oliver campaigning on his hit US television show, McDonald's has abandoned the beef filler from its burger patties After years of trying to break America, Jamie Oliver has finally made his mark by persuading one of the biggest U.S fast food chains in the world to change their burger recipe.