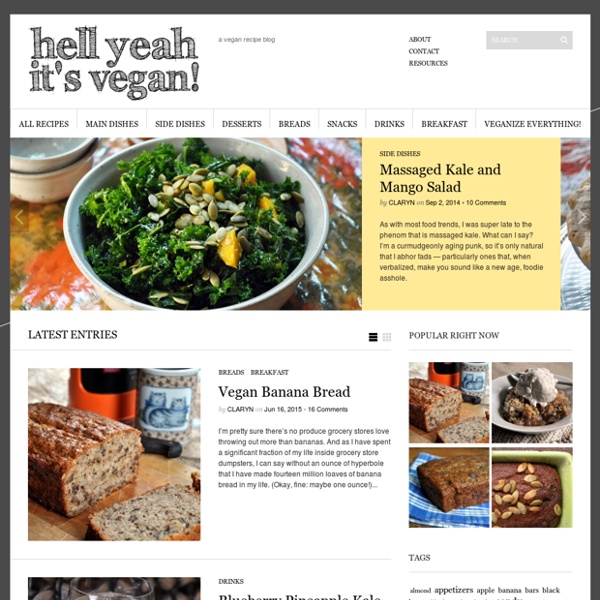 How to Grow Your Own Sprouts Lately I’ve been really excited about growing sprouts. Spring has been mercilessly taunting the northeastern U.S. for the last couple of months, and things have been looking really bleak. To keep from losing my mind, I’ve taken to “eating optimistically,” which involves eating piles of sprouts and all the raw veggies I can get my... Vegan Irish Soda Bread Saint Patrick’s Day is just two weeks away, and while I am neither Irish and nor really into holidays that don’t involve getting a day off work, I do savor any excuse to make Irish soda bread.

5 Day Green Smoothie Challenge I was recently inspired by Holly to try out the whole green smoothie thing. I love vegetables even though I probably don't eat them as often as I should. I also had never tried making a smoothie with greens before, so I wanted to try it out-for fun and health. Good news-green smoothies are awesome! Since this was my first encounter with the whole thing I started small with a five day challenge. If you want to join in the fun you can! Ordinary Vegan Shopping List Hi Katherine and welcome to the Ordinary Vegan community. I am excited that you are considering a plant-based diet. The most important advice I would have for you is to keep it simple. Stay away from a lot of processed foods like vegan cheese and oreos. If you need a little of that stuff to transition, thats ok but don’t overdo it. You can be an unhealthy vegan if you fill up on processed foods like Oreos even if they are vegan.

Rosemary Soysage, Spinach and Mushroom with Farfalle This is a huge bowl of YUM. I found this recipe on epicurious years ago and kept taking things out, adding things in and tweaking things here and there until this concoction appeared and acted like it owned the place. Soysage, walnuts and mushrooms give the dish a wonderful heartiness while the spinach gives the dish a beautiful splash of bright green throughout. Oil cured olives are a perfect salty addition to top off this dish. Two Blue Lemons: Lemon Blueberry Scones Direct quote: "These are vegan?" Yup! They are also quick, easy, and relatively healthful as scones go. (All things in moderation.)

My Top 25 Vegan Kitchen Staples Awhile back, Alicia Silverstone did a post about her top 20 ingredients she couldn’t live without. Soon after, Cadry shared her list and Bobbie shared hers. Because list-making is one of my most favorite things in the world, I couldn’t pass this opportunity up to make a list of things my vegan kitchen is never without. cocoa macarons, vegan. « madcap cupcake Happy World Vegan Day! It is also time to reveal the most recent Daring Bakers’ challenge: Macarons. Well, truth be told, it was actually time to reveal the Daring Bakers challenge last Wednesday. Better late than never I say. There was no way I was going to miss out on trying my hand at making vegan macarons, and what better way to celebrate World Vegan Day, the kick off to World Vegan Month.

Pomegranate Yogurt Bowl Recipe I'm hoping this breakfast sets the tone for my entire day. I love the pretty pomegranate swirls intertwined with ribbons of a Turkish black pine honey a friend gave to me. There are little puffed BBs of quinoa, toasted sunflower seeds, some bee pollen, and creamy clouds of Greek yogurt. How to Stock a Vegan Pantry [Illustration: Robyn Lee] It's day five of this year's vegan experience (in accordance with Jewish customs, this year's Experience began at sundown on Friday evening, February 1st), and already things are going far more smoothly than last year. The biggest hurdle I faced back then was opening my refrigerator and realizing that there was almost nothing I could eat.

VwaV Chocolate Chip Cookies When I told my friend Mo recently that I've had INSANE cravings for sugar lately, she said "It's because you haven't gotten laid in a while. You just need to get laid, and problem solved." Easy 'nuff. But since *that* hasn't panned out quite yet, I instead spent last Friday baking just a wee bit shy of three dozen VwaV chocolate chip cookies, and then nearly plowed my way through all of them. By myself. I guess it's sort of the equivalent of cookie masturbation or something. Seeded Popovers Recipe The most delightful thing my oven produces is the popover. Gougères are a close second, but the popover wins for sheer drama. They're golden-crusted bready crescendos made from the simplest ingredients. Their crunchy exterior belies a billowy eggy interior that absolutely begs for a slather of butter or honey.

Vegan Junk Food VEGAN OK JUNK FOOD PETA (people for the ethical treatment of animals) has posted a list of Junk Foods, and standard every day items found in most grocery stores, which are VEGAN OK (not made from any animal products nor animal byproducts). I went out and got some Lays "Country Flavor" BarBQ Chips (not the Lays KC Masterpiece), and some Chocolate Oreos, and some Thomas' NY Style Bagles (Everything), some Ragu Pizza Sauce, and some Kraft Catalina Salad Dressing (actually quite good, and cheap). I already knew that Cracker Jack, Mambas, Dots, Hot Tamales, and Regular Fritoes were all VEGAN OK.