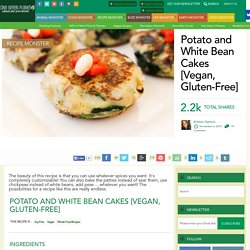 It's completely customizable! You can also bake the patties instead of sear them, use chickpeas instead of white beans, add peas ... whatever you want! The possibilities for a recipe like this are really endless. Potato and White Bean Cakes [Vegan, Gluten-Free] Ingredients 1/2-pound red potatoes1 cup cannellini beans3 cups spinach1/4 cup onion, diced small2 garlic cloves, minced1 teaspoon cumin1/2 teaspoon corianderSalt and pepper to taste4 tablespoons olive oil Preparation Boil potatoes until soft. Kristen Genton is the blogger behind Good Habits and Guilty Pleasures. One Pot Wonder Thai Style Peanut Pasta Recipe. Take a trip to Thailand in just one pot! 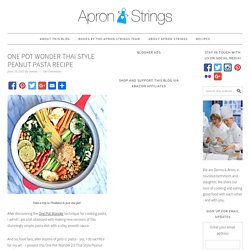 After discovering the One Pot Wonder technique for cooking pasta, I admit I am a bit obsessed with making new versions of this stunningly simple pasta dish with a silky smooth sauce. And so, food fans, after dozens of pots o’ pasta – yes, I do sacrifice for my art – I present this One Pot Wonder 2.0 Thai Style Peanut version.

I love the flavors of a great Pad Thai, so I decided to throw all those flavors in a pot with linguine pasta instead of rice stick noodles, the classic Pad Thai noodle. I added veggies that I love in Thai cuisine, and a scoop of peanut butter to melt into the sauce. The sauce that develops is rich and creamy due to the peanut butter. Just a few notes: the photo above has parsley, but I would normally use cilantro – just didn’t have any on hand when I made this one – parsley works, but cilantro is better, IMHO. How to Make Vegducken, the Vegetarian Version of Turducken.

Foodie confession: I was a vegetarian for nearly 10 years. 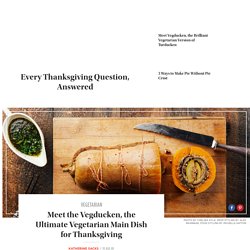 During that decade, I ate a lot of terrible, god-awful vegetarian food. But worse than the microwave dinners and portobello mushroom burgers was the onslaught of Tofurkey, the go-to Thanksgiving option of aunts who try to please their picky vegetarian nieces. I'll never truly understand why vegetarian cooking has to mean tofu, seitan, and—worst of all—that gelatinous mixture of "natural vegan flavors" that masquerades as a viable food option come Thanksgiving. Part of the reason I headed to culinary school in the first place was to tackle the awful vegetarian cooking of the early aughts: the overcooked pastas, the cheese fries masquerading as real food.

Culinary school coerced me into cooking—and, eventually, eating—meat, but I'm still an advocate for vegetarian cooking. No more! You want pizza with “cheese,” but the pizza chain you hit doesn’t offer vegan options. 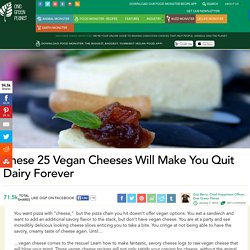 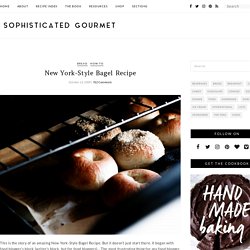 But it doesn’t just start there. It began with food blogger’s block (writer’s block, but for food bloggers)… The most frustrating thing for any food blogger. Many of us will not admit that we sometimes get it, but I find no problem with admitting that I occasionally get food blogger’s block. Why? Well, because I am far from perfect and showing small imperfections makes me normal. Well, I am not *that* normal. The Magical Loaf Studio: Create Your Own Adventist-Style Vegan Dinner Loaf!

Gormandize: Myanmar. The first dish I'm sharing for Burmese food month is Ohn No Khao Swe, one of the countries most common and popular dishes. 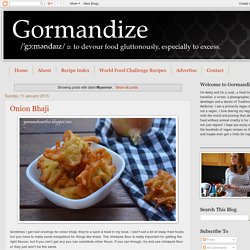 It's traditionally made with chicken, but I've substitited another Burmese food staple, chickpea tofu. I made my own chickpea tofu according to this recipe from a blog called Girl Eats World. Gormandize: United Kingdom. You can't really go wrong with raspberries and whipped cream, right? 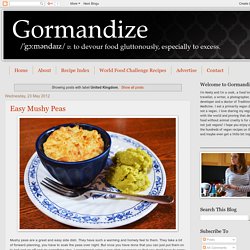 But I'll tell you what you can do - make it even better! What could be a better addition than whiskey, toasted oats and almonds? Oh, and some more whiskey on top :) This is a vegan version of a Scottish dessert called Cranachan, with some personal touches. There are two options on how to finish it off, you can use the whiskey syrup (below), or if you are a real hardcore whiskey fan you can just drizzle a teaspoon of straight whiskey over the top (although, this gives it rather a kick!).

I tried both and I did prefer to use the whiskey syrup. It's also wheat free, dairy free, egg free, peanut free, tree nut free (if you omit the almonds), sesame free and soy free. Ingredients 2 tins coconut cream, chilled in the fridge for at least 24 hours (the longer the better) 2 tbsp soft icing mixture. Gormandize: Italian. Like every other Australian kid, I grew up eating a lot of spaghetti bolognese. 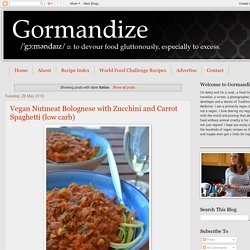 It's so commonly cooked in Australian homes that it's practically a national dish. Nobody in my family was vegetarian or vegan at the time, but my father used to switch around between making our bolognese with meat or with nutmeat. Even as a kid, I loved the nutmeat one more than the meaty one. When I grew up I learnt to cook it for myself and made it often. I introduced it to my Italian best friend and even he loved it more than the meat version. Gormandize: Indonesian. I secretly wish I could own all the cool cooking utensils which have very limited use. 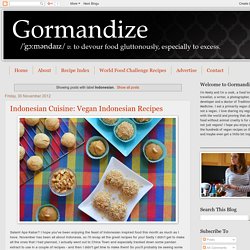 I'm not talking about electrical appliances - I have no desire for large electric stand mixers which take up heaps of bench or cupboard space. Nor do I covet the strange electrical appliances like pie makers, popcorn makers, egg cookers etc - because you don't really need those things, I can bake pies in the oven and I can make popcorn in a saucepan. If I ate eggs I would cook them in a pan. Gormandize: Croatian. I have certainly had such a great time digging around for amazing Croatian-inspired dishes to share with you this month. 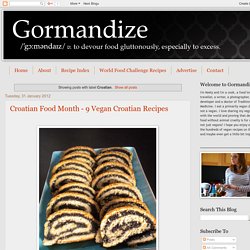 This particular one might seem a bit odd, I know, since you're all thinking "Pizza comes from Italy right? " - unless of course you're Croatian in which case you are probably thinking "Naša pizza je najbolja pizza na svijetu" (Ok - I used Google Translate for that so if you are Croatian and it doesn't make any sense I sincerely apologise). I have two people to thank in the creation of this dish - firstly my awesome and well-travelled friend Amy, who I asked for ideas on Croatian food since she had been to Croatia quite recently. She gave me the usual reply: "lots of seafood". Gormandize: Costa Rican. When I started researching Costa Rican food to make this month, I quickly realised that there are a LOT of essential Costa Rican ingredients that I just can't get my hands on. I started to compile a list of the ingredients that I kept finding in recipes again and again and again.

Gormandize: Chadian. I've been reading a lot of blog entires lately and have noticed a lot of Valentine's Day bashing going on. It's mostly along the lines of "why do we need a special day to be shown love when somebody who loves you should show you every day". My answer to this question is: we don't - but what's wrong with taking a moment out to appreciate how lucky you are to have love in your life and celebrate it a little? I'd like to put forward two points on this matter (before I get to the delicious point of this post): Firstly, if you are in a relationship in which your partner (he or she) ONLY shows you love on Valentines Day then you shouldn't be in that relationship full stop - so that shouldn't even be an issue!

Secondly, although there is no need to get commercial or expensive on Valentine's Day, there is nothing wrong with taking a moment out to appreciate the people in your life that you love and who love you. I have to admit, I'm not the kind of person who does Valentine's Day. Gormandize: Cambodian. Welcome to another month on Gormandize with A-dizzle & K-bobo!

Today is a pretty exciting day for me - because today we finally leap off the continent and explore Asia! If you're not already aware, every month I feature a country requested by you and post lots of yummy recipes that that come from or are inspired by that country - in a vegan version. If you think this is pretty awesome and want to request a country then jump onto this page here to request a country. Cambodia was requested by a reader called MishLich and I am so thrilled that they suggested Cambodia! If you read this blog much then you'll have read how excited I was when I made home made Sugar-Pickled Garlic as part of Iran month. Well - good news! The excitement doesn't stop there because I also made some other pickles! Iranian and other Middle Eastern cuisines love their pickles. I remember the first time I went to a proper Lebanese restaurant and they brought out bread, hummous, baba ghanoush and garlic dip as soon as we sat down.

Then they brought out this strange small dish of brightly coloured "things". Like Lebanese cuisine, Iranian cuisine includes a plethora of different pickled vegetables - pickled cucumbers, pickled cauliflower, pickled eggplant, pickled garlic, pickled onions and pickled carrots (read that list aloud really quickly and the word 'pickled' starts to sound really strange!). Gormandize: Artichoke & Pine Nut Dolma. Most of us encounter these little delights in the form of their Greek cousin, Dolmades. However, these parcels of rice wrapped in vine leaves also appear in Iranian cuisine (and some other Middle Eastern cuisines) called Dolma. The term Dolma simply refers to something which is stuffed - in this case it refers to stuffed vine leaves.

Eggplant, tomatoes, potatoes and many other vegetables can also be made into Dolma, simply by stuffing with a rice filling. I've never been very fond of dolmades when I have had them from delicatessens or bought in restaurants or supermarkets. So, I have always thought that one day I would make my own and fill them with flavours that I love in the hope that I would finally enjoy them! Ingredients Preserved vine leaves (available from Middle Eastern grocers in packets or jars) Gormandize: Iranian Sugar-Pickled Garlic. Gormandize: Vegan Pyzy (Polish Potato Dumplings) with Creamy Mushroom Sauce. Dumplings are a universally comforting food - from the fried or steamed Chinese dumplings dipped in tantalising chilli and soy sauce, to the hearty and satisfying potato and vegetable based dumplings of Eastern and Central Europe, there is something about dumplings which satisfies the soul as well as the stomach!

Generally, I've had a lot more experience making the Chinese variety than the European ones, but that changed when Poland was requested by a reader to be featured on the blog. Gormandize: Polish. I've made cabbage rolls once before, remember my Croatian Posna Sarma? You probably don't, because it was quite a long time ago (and look at how awful my photos were back then!). These Polish Golabki are similar but different - like the posna sarma they're stuffed with a tasty mixture of rice and vegetables, but they're smothered this time in creamy dill and mushroom sauce. Gormandize: Triple Melon Ice Blocks (Vegan, Sugar Free) The monthly Sweet Adventures Blog Hop is always a good excuse to dust off my dessert thinking cap and make something for my sweet tooth. Gormandize: Vegetarian Cufte (kind of like veggie meatballs...)