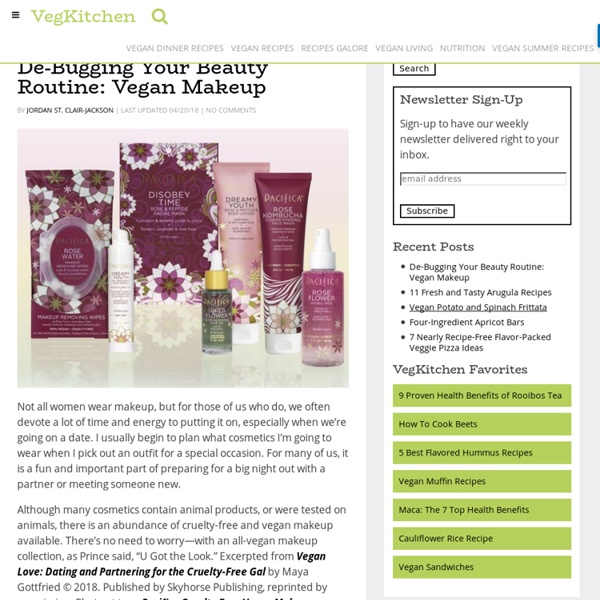 Nutty Chocolate Protein Bars with Chia Seeds Are You Using Real Cinnamon? Contributed by Cristina West, of An Organic Wife. Is your cinnamon fake? There’s a good chance that yes, it is. Go check the label on your cinnamon right now.

Diet, Dessert and Dogs NOTE: Although I’ve always cooked quite a bit of gluten-free foods, it wasn’t until March, 2009 that my diet became 100% gluten free. Some of the recipes included in this index still contain gluten. I’m working to identify those with the note, “contains gluten” in parentheses. All categories up to “Condiments, Sauces and Toppings” have been completed. .. . the remainder should be completed shortly! In the meantime, please check to ensure that ingredients are “safe” for you in the other categories. Top 10 Best Countries to be Vegetarian Vegetarians will have a hard time traveling to certain countries, as meat is in the culture and can be included in everything. However, certain countries have large vegetarian populations and customs. 10. Canada: There is a large vegetarian culture in Canada, especially in big cities. Because Toronto is the most diverse city in the world, you can enjoy delicious vegetarian cuisine from so many different cultures; visit the Toronto Vegetarian Association.

3 Ultra-Satisfying Vegetarian Fall Soup Recipes Image via: Sneakerdog Every year, when it starts getting cold, I crave soups and stews packed with greens and garlic. To me, it’s the ultimate comfort food: hot, healthy, and vegetarian. I love to experiment with seasonal ingredients like apples and butternut squash, and add in favorites like spinach and hot spices. Here are three filling, unbelievably delicious meat-free soup recipes that will be in rotation in my soup pot this season. Garlic, Chickpea and Spinach Soup By Sneakerdog Herb List with Pictures Join Over 1,875,000 Fans On Facebook! Homepage Blog Individual Herbs Herbal Remedies Here Come the Cookouts - Leslie Sarna With Summer here, the warm weather is bound to bring on the cookouts. The veggie burger is pretty much the vegetarian staple at these. Let’s face it, when people don’t know what to serve a vegetarian or vegan, a frozen veggie burger patty is often what they get. (at least I get) While those can be very tasty, have you ever made them from scratch? They are really really easy to make and you can make a bunch and freeze them so they are always on hand for a last minute lunch or dinner. : )

Seven Worst Habits After Eating One of the most difficult thing for everyone is changing a habit. If you want to improve your health and keep your body slim try following this list that experts have made including seven things you should never do after having a meal. 1.Cigarette after having a meal

Demystifying Vegan Nutrition: A Starter Guide This document as a formatted color pamphlet What is a vegan diet? A vegan diet is one that consists of only plant-derived foods, as vegans do not use or consume any animals or animal products, including flesh, eggs, and milk. Like non-vegans, vegans eat soups, stews, stir-fries, salads, and casseroles. They may consume a wide variety of ethnic foods, as well as vegan versions of traditional favorites such as pizza, tacos, burritos, lasagna, burgers, barbeques, loaves, chili, pancakes, waffles, sandwiches, and desserts. What is a healthful vegan diet? vegan curried potato hash with baby spinach Uh, it's cold. Not sure if anyone's mentioned that yet. Had you noticed? 10 Scientific Studies Proving GMOs Can Be Harmful To Human Health Over the past few years, a number of countries have completely banned GMOs and the pesticides that go along with them, and they are doing so for a reason. The latest country to consider a complete ban is Russia after top government scientists recommended at least a 10 year ban. The truth is, we don’t know enough about GMOs to deem them safe for human consumption. Believe it or not the very first commercial sale of them was only twenty years ago. There is no possible way that our health authorities can test all possible combinations on a large enough population, over a long enough period of time to be able to say with absolute certainty that they are harmless.