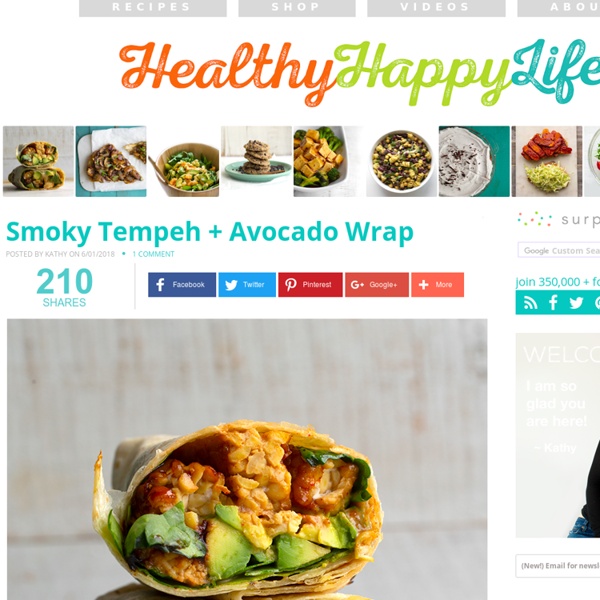 Is black the new brown? In my house it is! Well, sort've. I still adore my beloved, simple, nutty, fluffy, go-to short-grain brown rice. But black rice also called "forbidden" rice or purple rice is my new must-try fave! Here is why: It contains all the fiber, texture and 'less processed' goodness of brown rice.

Little Broken - Food recipes from fresh ingredients - Part 2 Avocado Wedge Salad with Almond-Parmesan Croutons By Katya 4 Comments Nothing beats a wedge salad like this! A Spicy Perspective Turkey Soup with Poblano Peppers Creamy Poblano & Turkey Soup + Giveaway Is your fridge loaded with Thanksgiving leftovers? This creamy Turkey Soup with Poblano Peppers will give your leftovers a sassy makeover with a little southwest flair. Not even the most anti-leftover eater could resist it! Diet, Dessert and Dogs NOTE: Although I’ve always cooked quite a bit of gluten-free foods, it wasn’t until March, 2009 that my diet became 100% gluten free. Some of the recipes included in this index still contain gluten. I’m working to identify those with the note, “contains gluten” in parentheses. All categories up to “Condiments, Sauces and Toppings” have been completed. .. . the remainder should be completed shortly! In the meantime, please check to ensure that ingredients are “safe” for you in the other categories. Also. . . .This page is updated at the end of each month.

Vegan Substitutes Tofu Sour CreamVegan Vittles by Joanne Stepaniak 1 10.5 oz. box firm silken tofu 1 Tbsp. oil 2 tsp. lemon juice 2 tsp. apple cider vinegar 1 tsp. sweetener 1/2 tsp. salt Crumble tofu and all other ingredients into a food processor and process for several minutes, until smooth. Stored in an air-tight container, it will keep up to 5 days in the fridge. Note: This may separate upon refrigeration and may need to be remixed.

40 Tips for a Better Life Reading tips from the Internet, I got this useful list where I personally follow some of it to help me sort of improve my day to day life. Read through it and just follow the things you want to believe. Remember, each person has his/her own needs/wants/beliefs. Take a 10-30 minute walk every day. And while you walk, smile. It is the ultimate anti-depressant.Sit in silence for at least 10 minutes each day.Buy a DVR and tape your late night shows and get more sleep.When you wake up in the morning complete the following statement, ‘My purpose is to __________ today.’Live with the 3 E’s — Energy, Enthusiasm, and Empathy.Play more games and read more books than you did in 2007.Make time to practice meditation, and prayer.

Recipe Index — SK Chestnut Sunflower Thimbles with Raspberry, Quince and Apricot Preserves (GF, V) Brownie Ganache Tart with Whipped Coconut Creme (GF) Buckwheat Skillet Cornbread with Whipped Honey Butter (GF) 5 Food Blogs I’m Following Now Ho! Ho! Ho! Take a lookie at what Santa’s got in his bag for all of you good little boys and girls in the kitchen. Nut Tree Agroforestry Where you find the money To make money off a nut plantation, you need to do three things: make money off the land that isn't being used by the trees when they are young, make money off the nuts, then pocket a bit at the end when the timber harvest is done. A 'bit at the end'? Well, yes. If a seedling costs you $2 to plant, 10¢ a year to weed, prune, protect against voles, etc., optimum harvest value is at 70 years, and commercial interest rate is 9%, then you need to get $1300 stumpage per tree just to break even.

Vegetarian Frugal Housewife “Vegetables are a must on a diet. I suggest carrot cake, zucchini bread and pumpkin pie.” ~ Jim Davis, 20th-Century American Actor When I was a child, everyone was crazy about chocolate cake. It seemed to be the star of every birthday party, along with the balloons, presents and pin-the-tail-on-the-donkey. Myself, I’ve never been extremely partial to chocolate. I can enjoy it, to be sure, but I don’t crave it.

Top 25 Fitness Motivational Quotes By Chris Freytag, Fitness Expert for Prevention Magazine & ACE Board Member I am addicted to motivational words and phrases. I have them on my laptop screen saver and on my iPhone. I wear a necklace that says “Live Life Well”. I have bracelets with coins saying “Believe, Sweat, and Inspire”. I get energy from words. About the Perennial Plate The Perennial Plate is a 2013 James Beard Award winning online weekly documentary series dedicated to socially responsible and adventurous eating. Chef and Activist, Daniel Klein and Filmmaker Mirra Fine are traveling the world exploring the wonders, complexities and stories behind the ever more connected global food system. Season One took place over a calendar year in Minnesota where every Monday for 52 weeks, the duo released short films that followed the culinary, agricultural and hunting explorations of Daniel Klein. In Season Two, Klein and Fine traveled across America, taking the viewer on a journey to appreciate and understand where good food comes from and how to enjoy it. In their current season, Klein and Fine travel to China, Japan, India, Sri Lanka, Spain, Morocco, Italy, Turkey, Argentina, Mexico, South Africa and Ethiopia to tell the stories of real food and the people who make it.

Maple & Hazelnut Encrusted Pork Sirloin Tip Roast + A Giveaway Halloween is getting closer, and before I start sharing a few spooky recipes, I wanted to share one last Porktober recipe for the month. This recipe features the delicious sirloin tip roast, a juicy cut of meat from the upper back that is as versatile as it is flavorful. This particular cut does best when cooked slowly, so I roasted it at a lower temperature for a longer period of time.

Ontario Farmer Global biofuel production fell in 2012 April 17, 2014 - In 2012, the combined global production of ethanol and biodiesel fell for the first time since 2000, down 0.4 per cent from the figure in 2011, according to a new document from the Worldwatch Institute.Global ethanol production declined slightly to 83.1 billion liters, while biodiesel output rose fractionally, from 22.4 billion liters in 2011 to 22.5 billion liters in 2012. Biodiesel now accounts for over 20 percent of global biofuel production, the institute’s Tom Prugh writes.The top five ethanol producers in 2012 were the U.S., Brazil, China, Canada, and France. But the United States and Brazil accounted for 87 per cent (61 per cent and 26 per cent, respectively) of the global total. U.S. ethanol production totaled 50.4 billion liters, down about four per cent from 2011. Peter Van Sleeuwen elected as Board Member for Reg

Smart Composting Tips for Urban Gardeners & Apartment Dwellers : WebEcoist (Image via Brettf) With the economy in dire straits and many people losing their jobs, everyone’s looking for ways to save money and become more self-sufficient. Growing your own food – even if you live in an apartment or urban setting – is a low-cost and easy first step towards saving a lot of money. Composting is another great activity that can help both your gardening and the planet.