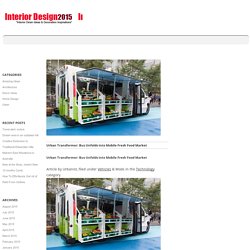 Bringing healthy and organic fruits and vegetables into low-income areas of Toronto lacking grocery stores, this converted bus is much more than a normal food truck – it looks like an ordinary vehicle until it stops and deploys its colorfully-stocked shelves (images by Laura Berman). As in many cities, there are ‘food deserts’ in Toronto in which it is hard to find fresh seasonal produce. Using a vehicle donated by the Toronto Transit Commission, LGA Architectural Planners helped convert this vehicle to address this issue.

“Even in a city as dynamic as Toronto, there remain neighbourhoods where residents are unable to access the foods essential to a healthy diet. FoodShare Toronto. First farmers market truck brings fresh fruit, veggies to Moncton - New Brunswick. WATCH: Moncton’s first farmer’s market truck rolled into the city. 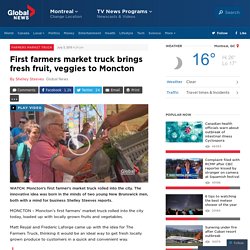 The innovative idea was born in the minds of two young New Brunswick men, both with a mind for business Shelley Steeves reports. MONCTON – Moncton’s first farmers’ market truck rolled into the city today, loaded up with locally grown fruits and vegetables. Matt Reyjal and Frederic Laforge came up with the idea for The Farmers Truck, thinking it would be an ideal way to get fresh locally grown produce to customers in a quick and convenient way. “They know where their produce comes from, they know its fresh and that they can trust the source who brings it to them.” said Rayjal. Rayjal left a career as a business analyst to pursue farming three years ago. Healing our Planet One Meal at a Time. The Super Green School Bus.

Okay, so the school bus is actually still classic yellow in colour, but it is so packed with green goodness that I’m not sure where to start. 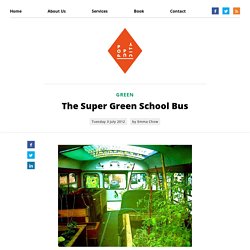 Named the Green Urban Lunch Box, the bus has vegetable gardens, an aquaponics system, solar power, a gravity feed watering system, and it is still a functioning vehicle that travels to schools and local events in Salt Lake City, Utah. The Green Urban Lunch Box started about a year ago when Shawn Peterson, a youth counselor, decided to buy an old school bus with the hopes of reconnecting city folk with their food – where it comes from, how it’s grown. Most of the visitors are children, but the bus has also reached parents, as well as reintegrated elderly and disabled individuals into the community through gardening initiatives. Peterson started the Green Urban Lunch Box as a personal project, using his own funds until a recent crowd-funding campaign.

Future plans include a rooftop garden, interior vertical garden and coffee ground mushroom garden. Farmer’s Market On Wheels Delivers Veggies To Toronto’s Food Deserts. Inside the Fresh Truck. Let's Talk About Food festival takes over Copley. BOSTON —For the third year in a row, the region's largest food education festival took over Boston's Copley Plaza, featuring nationally celebrated chefs, programs for children and startup companies that could change the way food is delivered in this city. 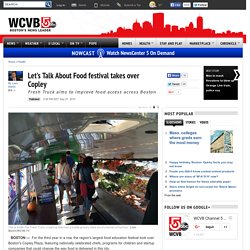 "So many of the very powerful ideas that are in food actually started in Boston," said Louisa Kasdon in an interview Saturday with NewsCenter 5's Liam Martin. Kasdon, a food enthusiast, is founder of The Let's Talk About Food festival. The goals of the Friday-Saturday event, she said, are to promote sustainable farming, non-GMO foods, fair treatment of animals, affordable healthy foods and nutrition education for children. One of the highlights of this year's festival is The Fresh Truck, a startup founded by a few recent graduates of Northeastern University. Fresh Truck - Boston Food Trucks, Street Food. Fresh Truck Produce Vegetarian About Fresh Truck A greengrocer in a retrofitted school bus, The Fresh Truck has a mission to bring healthy foods to neighborhoods across Boston. 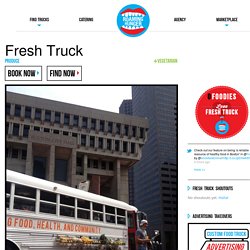 By increasing access to these foods at more reasonable prices, The Fresh Truck hopes to improve life citywide. Fresh Truck – Mobile Farmers market - Slow Down Farm. Fresh-food truck in West Philly ripe for expansion - philly-archives. Kuck, 32, an architecture graduate from Penn, started the business five years ago, when he and a ragtag volunteer group were pushing a cart loaded with the collection of fresh produce from community gardens they tended in Mantua and the Belmont section of West Philly. 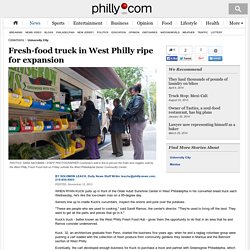 Eventually, the cart developed enough business for Kuck to purchase a truck and partner with Greensgrow Philadelphia, which operates several farms in the region and provides most of the hub's organic supply. Kuck, whose official title is Greensgrow West director, said the hub recently bought a second truck, which will enable travel to other areas of the city. Freshest Cargo mobile farmers’ market truck assistant. Freshest Cargo mobile farmers’ market assistant Think access to fresh fruits and vegetables is important? 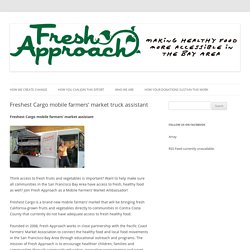 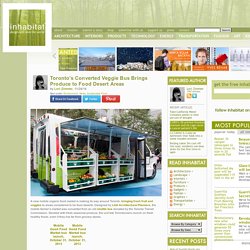 Designed by LGA Architectural Planners, the mobile farmer’s market was converted from an old shuttle bus donated by the Toronto Transit Commission. Stocked with fresh seasonal produce, the unit lets Torontonians munch on fresh healthy foods, even if they live far from grocery stores. Inside the healthy food bus, LGA installed a series of fold out shelves to prominently show off the bounty for sale. Sammi’s Nutrition House Truck. A brightly-painted truck began parking at Old Slip & Water St. a while ago and from the side facing the street it appeared to be a truck selling smoothies, fruit juices and fruit like the carts you see dotting sidewalks in the city. 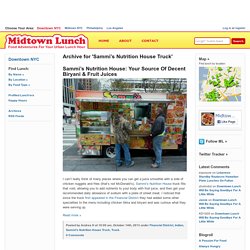 It turns out Sammi’s is a bit of a Jekyll & Hyde situation as it also sells burgers, fries and chicken wings among other decidedly unhealthy foods. Had anyone had the food here or are you curious about it? I like the idea of getting carrot juice with a side of wings. Mobile Veggies: Coming Soon to Your Neighborhood? Health experts often blame poor neighborhood’s inaccessibility to healthy food–like fruits and vegetables–for their community’s declining health. 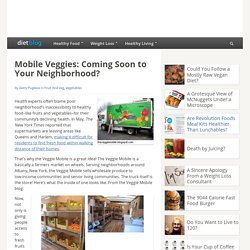 In May, The New York Times reported that supermarkets are leaving areas like Queens and Harlem, making it difficult for residents to find fresh food within walking distance of their homes. That’s why the Veggie Mobile is a great idea! The Veggie Mobile is a basically a farmers market on wheels. Serving neighborhoods around Albany, New York, the Veggie Mobile sells wholesale produce to low-income communities and senior living communities. The truck itself is the store! Now, not only is giving people access to fresh fruits and vegetables a wonderful public service, but apparently the Veggie Mobile has fantastic prices too! When compared to New York Supermarket–a small grocery in the poor Arbor Hill neighborhood of Albany–the Veggie Mobile offered dramatic savings, more selection and fresher options.

This is really cool. Green Truck Dishes Out Gourmet Local, Organic Eats. “The biggest impact you can have on the environment is changing your eating habits,” says David Holtze of the gourmet organic Green Truck, “like thinking about where your food comes from and eating less meat.” David Holtze in the Green Truck The Green Truck debuted in San Diego this March at an Ocean Beach block party and has since been “Healing Our Planet One Meal at a Time” at eco-fairs, catered events, and across town at locations updated via Twitter and Facebook. Organic Vegan Fast Food Truck! - Oy Vegan! Mobile Greenhouse Will Run Entirely on Renewable Energy. Spring is finally here and that means lots of delicious local food is coming our way! Fort Greene resident Nick Runkle and his business partner Justin Cutter are the latest pair helping to make it easier for New Yorkers to have access to quality local produce.

The two have founded Compass Green, a mobile greenhouse which will deliver fresh produce to schools in Manhattan and Brooklyn, and potentially throughout the country. Compass Green also acts as a mobile education center to help students better understand the inner workings of mini ecosystems – and it all takes place in an 18-foot diesel box truck. After attending a mobile art show last summer, Nick Runkle was inspired to do more with his farming background — he wanted to share his love and knowledge of fresh and sustainable foods with the masses. The 18-foot box truck will be an exceptional fully functioning greenhouse that will run on used vegetable oil, and it will be powered with solar and wind energy. . + Compass Green.