Ecofriend - Promoting eco friendly lifestyle to save the environment 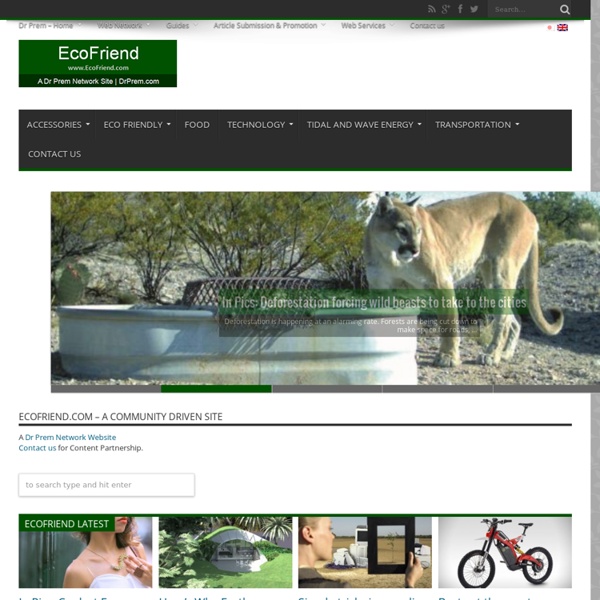 Diesel v s hybrid Cars To slender that decision down a tiny bit we are going to analyzing diesel and half and half power trains, as they are the most generally accessible choices to gas fueled autos. Shockingly better, these are both choices that don’t oblige you to exchange all your garments for shoes and hemp ponchos. So right off the bat, wouldn’t it be great if we could get down to it. Read more... How to make your kitchen eco friendly?

"Green" Furniture The Secret Garden collection by home furniture Thai company Ayodhya uses real dried moss inserted under a glass table top. Also mirrors, stools, trays and boxes all made with recycled newspaper. [via] Learn how to speak French - Très Bien Aurelie Therouanne Teaches: French, Spanish, English Hello! I'm Aurélie, a Frenchie who lives currently in Spain. It's been two years since I moved in the beautiful and colorful Granada, one of the best city of Andalusia, south of Spain. Search #d9e8c3 #ced181 #7c8f50 #555e32 #bf867c Are eReaders Really Green? 1. In 2009, the Book Industry Environmental Council set a couple of environmental goals for the U.S. book industry. Using a calculation of the industry’s total greenhouse gas emissions from 2006 as its baseline, the BIEC and its members pledged to reduce the industry’s carbon footprint by 20% in 2020 and by 80% in 2050. When the pledge was made, the Kindle had existed for only a year and a half, and the Nook was still eight months away.

Steve Jobs Understood Something About Emotions That The Green Movement Too Often Ignores photo: Thierry Ehrmann/CC BY Going through all the Steve Jobs commentary this morning I came across actor-comedian-proud technophile Stephen Fry's commentary on BBC News. Fry and Jobs have apparently been friends for a while and the whole thing is worth a listen. But there's one passage that really jumps out at me as being something the environmental community, particularly those involved in politics and those trying to motivate people to become more environmentally aware, should pay close attention to.Fry says,

LG cooks up more flexible & less hazy 18-inch OLED panels LG Display has outdone itself, with more flexible displays than it’s ever made before. The company announced today a flexible 18-inch panel made of organic light-emitting diodes, or OLEDs, as well as a new transparent OLED panel in the same size thats beats previous models on light transmittance and haze. The research could result in the creation of more, and larger, devices with transparent or flexible displays. That means devices no longer need to stay straight, the way they do when displays are made of glass. It could also represent a challenge to competitors like Samsung.

Forest Farming vs. Forest Gardening: What’s the Difference? Steve Gabriel In our pursuit of discovering forest farmers for the writing of our book, we’ve received a lot of responses from folks around developing forest gardens. This post describes the difference between the two practices. We are absolutely supportive and encouraging of forest gardens and see the two practices as companions. The topic of forest gardening has been well articulated in Dave Jacke and Eric Toensmeier’s 2005 book, Edible Forest Gardens Vol 1 & 2. (EFG) Luminae Glass Keyboard From TransluSense Inspired by the future see-through interfaces from the sci-fi movies Jason Giddings created the Luminae glass keyboard. In early 2012 the project from TransluSense finished successfully its campaign on Kickstarter and now at the CES 2013 the Luminae stands in splendour: a light pipe, infrared LEDs, and visible LEDs feed signals into the artfully curved glass. The three cameras look upward from below and see when your fingers break the light pattern, in such a way recognizing what you’re doing on the glass. A smaller trackpad version will also be available. The main advantages of the glass keyboard that costs $500 are its stunning looks and that you’ll never have to shake or vacuum crumbs out from under your keys ever again. Besides users can design their own custom overlays online and set the keyboard to recognize all the custom keys and shortcuts.Via:dvice.com