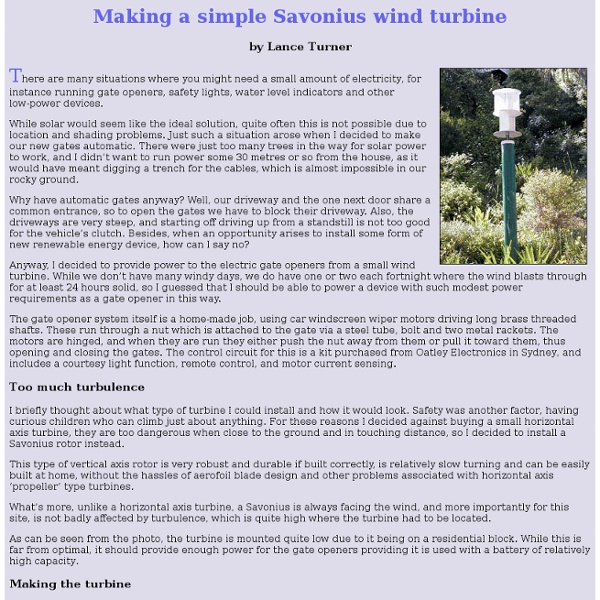 by Lance Turner There are many situations where you might need a small amount of electricity, for instance running gate openers, safety lights, water level indicators and other low-power devices. While solar would seem like the ideal solution, quite often this is not possible due to location and shading problems. Just such a situation arose when I decided to make our new gates automatic. There were just too many trees in the way for solar power to work, and I didn’t want to run power some 30 metres or so from the house, as it would have meant digging a trench for the cables, which is almost impossible in our rocky ground. Why have automatic gates anyway? Anyway, I decided to provide power to the electric gate openers from a small wind turbine. The gate opener system itself is a home-made job, using car windscreen wiper motors driving long brass threaded shafts. Too much turbulence I briefly thought about what type of turbine I could install and how it would look. Making the turbine The mast

SheerWind's INVELOX Wind Turbine Can Generate 600% More Energy Than Conventional Turbines US-based wind energy company SheerWind just unveiled the INVELOX – a tunnel-based wind turbine that can produce up to 600% more power than traditional wind turbines. The company states that after extensive field-testing, their new INVELOX turbine “significantly outperforms the traditional turbine” and could reduce installation capital costs to less than $750 per KW. The INVELOX energy system works by capturing ground-level breezes and funneling them through a tapering passageway that naturally accelerates wind flow. Unlike other turbines, it also minimizes environmental and animal impact, and it requires no government subsidies to be profitable. All of this makes INVELOX a potentially game-changing renewable energy solution that could be easily integrated within commercial renewable energy operations. SheerWind claims that the INVELOX turbine can operate at wind speeds as low as 1 mile per hour, and it has generated a record high energy production capacity of 72%.

Home-made Hydraulic Ram Pump Home-made Hydraulic Ram Pump This information is provided as a service to those wanting to build their own hydraulic ram pump. The data from our experiences with one of these home-made hydraulic ram pumps is listed in Table 4 near the bottom of this document. The typical cost of fittings for an 1-1/4" pump is currently $120.00 to $240.00 (U.S.A.) depending on source prices, regardless of whether galvanized or PVC fittings are used. Click here to see a picture of an assembled ram pump A Rocket Stove Made From a Five Gallon Metal Bucket The principle behind a rocket stove is simple–rather than cooking on an open fire, you burn wood in an insulated chimney. Rocket stoves are highly efficient and easy to make. They run on twigs, so you can avoid cutting down a whole tree just to cook dinner.

How I built an electricity producing wind turbine Several years ago I bought some remote property in Arizona. I am an astronomer and wanted a place to practice my hobby far away from the sky-wrecking light pollution found near cities of any real size. I found a great piece of property. The problem is, it's so remote that there is no electric service available. That's not really a problem. No electricity equals no light pollution. Home Made Wind Turbine Want to build a wind turbine for your home? I have gathered several PDFs for those who want to build there own wind turbines and have links to them at the bottom of this post. They cover all types of wind turbines and issues that you may run in to such as wind speeds and noise. From reading these my self I have found that the Hi-VAWT takes all into consideration and is easy to replicate. In VENTURI horizontal axis Wind Turbines wind turbines the blades rotate and describe a circular surface.

'Wind trees' could replace controversial giant turbines in race for sustainable energy An artificial 'wind tree' has been created to generate electricity from even the slightest flow of air. Jérôme Michaud-Larivière, founder of the Paris-based start-up NewWind, has created Tree Wind and plans to market the invention next year. The eight-metre high (25ft) tree consists of a steel trunk, from which extend branches holding 100 plastic 'leaves', AFP reports. "The idea came to me in a square where I saw the leaves tremble when there was not a breath of air." Michaud-Lariviere said he realised that energy had to come from somewhere, and that it must be able to be transferred into watts. The prototype has been "planted" at the telecom City Pleumeur-Bodou.

Living Off-Grid: Our Micro Hydro Alternative Energy System Blue Energy Published on March 24th, 2009 | by Jennifer Lance As a follow up to Sean’s post on Micro Hydro Essentials, I thought I would share an overview of my system, which has powered my home for over 13 years. We are fortunate to live on rural mountain property in Northern California with a creek that is not seasonal, although the volume of water does drop significantly during the arid months of summer.Â The beauty of hydro power is that it produces power 24 hours a day and is not dependent upon weather patterns, such as sun and wind. DIY: Beer Can Into Camping Stove You can whip one of these up in a matter of minutes. They’re so easy to make and they work really well. First find yourself some scissors and a beverage can and then start the above video. This is an inexpensive way to be prepared in the event of a power outage as these stoves give off a lot of heat and have the ability to cook large meals. They also make great holiday gifts for friends and family.

How I built an electricity producing Solar Panel Several years ago I bought some remote property in Arizona. I am an astronomer and wanted a place to practice my hobby far away from the sky-wrecking light pollution found near cities of any real size. In my attempt to escape city slicker yuppies (you know the kind, the ones that like to blab loudly on their cell phone while they work on some business administration degree in a cyber cafe somewhere in Trendyland.) and their light pollution, I found a great piece of remote property.