Family wraps home in greenhouse to warm up Stockholm weather. The import duty rate for importing Solar Panel Kit into Canada is 0% Solar PV Manitoba. Ruling says Chinese solar panels pose risk to Canadian industry. After months of deliberation by two government bodies, a final decision has been released ruling that Chinese solar panels are being dumped into Canada and they could damage the Canadian solar industry. 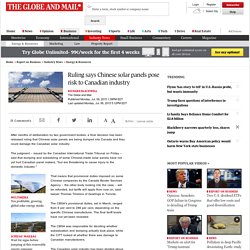 The judgment – issued by the Canadian International Trade Tribunal on Friday – said that dumping and subsidizing of some Chinese-made solar panels have not yet hurt Canadian panel makers, “but are threatening to cause injury to the domestic industry.” That means that provisional duties imposed on some Chinese companies by the Canada Border Services Agency – the other body looking into the case – will be refunded, but tariffs will apply from now on, said lawyer Thomas Timmins of Gowlings in Toronto. The CBSA’s provisional duties, set in March, ranged from 9 per cent to 286 per cent, depending on the specific Chinese manufacturer. The final tariff levels have not yet been revealed. The Canadian solar industry has been divided about the imposition of import duties. Mr. Report Typo/Error.

Wind Turbine Blade - STEP / IGES. Home - A WebsiteBuilder Website. Silent rooftop wind turbines could generate half of a household's energy needs. Small wind turbines scaled to the right size for residential and urban areas have so far lived in the shadows of their larger wind-farm-sized counterparts. 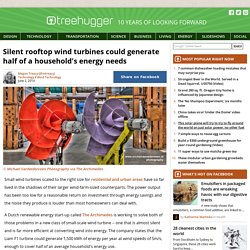 The power output has been too low for a reasonable return on investment through energy savings and the noise they produce is louder than most homeowners can deal with. A Dutch renewable energy start-up called The Archimedes is working to solve both of those problems in a new class of small-scale wind turbine -- one that is almost silent and is far more efficient at converting wind into energy. The company states that the Liam F1 turbine could generate 1,500 kWh of energy per year at wind speeds of 5m/s, enough to cover half of an average household's energy use.

When used in combination with rooftop solar panels, a house could run off grid. "When there is wind you use the energy produced by the wind turbine; when the sun is shining you use the solar cells to produce the energy," The Archimedes CEO Richard Ruijtenbeek said. Countryside - homesteading - self-reliance - simple life. 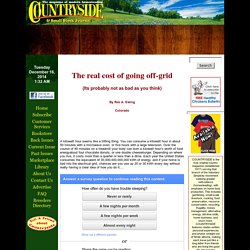 You can consume a kilowatt hour in about 50 minutes with a microwave oven, or five hours with a large television. Over the course of 80 minutes on a treadmill your body can burn a kilowatt hour’s worth of food energyabout four chocolate donuts, or one double cheeseburger. Depending on where you live, it costs more than a quarter or less than a dime. Each year the United States consumes the equivalent of 30,000,000,000,000 kWh of energy, and if your home is tied into the electrical grid, chances are you use up 20 or 30 kWh every day without really having a clear idea of how you do it.... 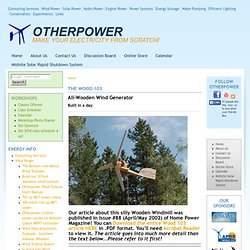 Pictured above is one of the magnets I used. Above you can see the armature for the alternator. Pictured above you see the wooden pillow block bearings. The stator, on which the coils are wound was cut from two pieces of 2" X 4" lumber. I dragged a magnet around in the dirt of my driveway, so that it would attract the magnetite sand. The dirt was mixed with epoxy, so that I had a thick paste. The completed alternator! To stay with the "style" of the project I decided to build the whole windmill out of wood, it's a fairly simple design and should be self explanatory. The prop is wooden, made from 1" X 4" lumber. Www.otherpower.com/sites/default/files/imported/Experiments/wood103.pdf.