Why are we a nation of tree-huggers? 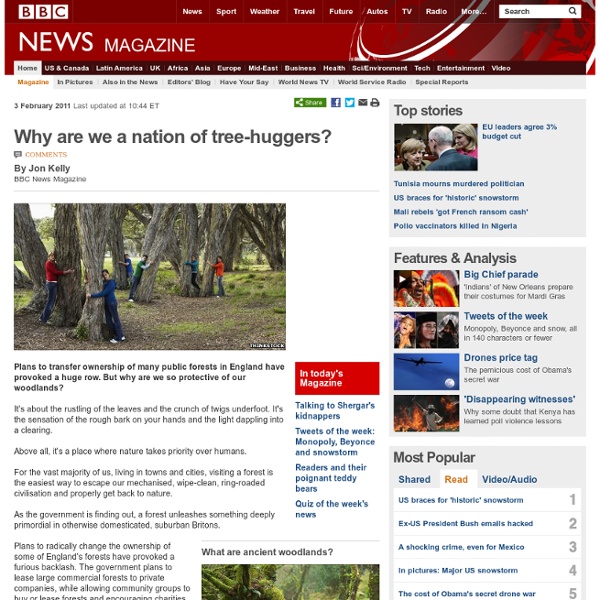 3 February 2011Last updated at 15:44 By Jon Kelly BBC News Magazine Plans to transfer ownership of many public forests in England have provoked a huge row. But why are we so protective of our woodlands? It's about the rustling of the leaves and the crunch of twigs underfoot. Above all, it's a place where nature takes priority over humans. For the vast majority of us, living in towns and cities, visiting a forest is the easiest way to escape our mechanised, wipe-clean, ring-roaded civilisation and properly get back to nature. As the government is finding out, a forest unleashes something deeply primordial in otherwise domesticated, suburban Britons. Plans to radically change the ownership of some of England's forests have provoked a furious backlash. A YouGov poll suggested that 84% of people were opposed. to the government's plans, with one pressure group saying it had collected 400,000 signatures on a petition. Continue reading the main story Why trees are a force for good

Conservation in Madagascar Madagascar has suffered environmental degradation over a significant part of its land mass. Forests that once blanketed the eastern third of the island have now been degraded, fragmented, and converted to scrub land. Spiny forests in the south are rapidly giving way to "cactus scrub" as indigenous vegetation is cut and burned for subsistence charcoal production. Viewed from above, Madagascar's rivers look as if they are bleeding the country to death as soil is eroded away from the central highlands. Each year as much as a third of the country burns and 1 percent of its remaining forests are leveled. This ecological decline has not been ignored. At present, more dollars are pouring into conservation efforts in Madagascar than any other part of Africa. Next >> Conservation index Parks in Madagascar | Madagascar's Parks Service Ecotourism hints | Being an ethical traveler Find a mistake?

The Ecology of Work | Curtis White Environmentalism can't succeed until it confronts the destructive nature of modern work—and supplants it by Curtis White Art by Teun Hocks Last of a two-part series. See The Idols of Environmentalism for part one. I ENVIRONMENTALISTS SEE THE ASPHALTING of the country as a sin against the world of nature, but we should also see in it a kind of damage that has been done to humans, for what precedes environmental degradation is the debasement of the human world. We are not the creators of our own world; we merely perform functions in a system into which we were born. Challenging our place in this system as mere isolated functions (whether as workers or consumers) is a daunting task, especially for environmentalists, who tend to think that human problems are the concern of somebody else (labor unions, the ACLU, Amnesty International, Habitat for Humanity, etc.). II HERE’S A BALD ASSERTION FOR WHICH I have no proof scientific or otherwise: a human society would never willingly harm nature.

UK and World Weather Forecast: radar, severe warnings, and more Global Environment - Biodiversity - Decidious Forest Biome This biome is found in three separate regions in the northern hemisphere. The types of trees you can find in these three regions are broad leafed deciduous trees and some of the evergreen species. The trees are more commonly known as ash, beech, birch and northern arrowwood. Also found in this biome are wild flowers such as oxlip, bluebells, painted trillium and primrose. The soil is very fertile. There are many types of animals in the deciduous forest ranging from mammals like deer to bugs like mosquitoes. A few common animals found in the deciduous forest are, deer, gray squirrels, mice raccoons, salamanders, snakes, robins, frogs and many types of insects. Most deciduous forests are found in Eastern North America somewhere around 35-48° N, and Europe and Asia around 45-60° N. The average temperature is around 50° F (about 10° C).

Earthquake Swarm A series of earthquakes have been experienced in Arkansas and are slowly becoming the norm, though the reason as to why there have been so many remains elusive. According to the most recent geological report by the USGS, Arkansas has been experiencing about two-to-seven earthquakes a day ranging from about 1.8-4.0 on the richter scale, and the trend doesn't seem likely to stop with up to two dozen quakes sometimes being reported in a given day. More than 800 earth quakes have been reported across the region in the past six months, and the region experienced its largest quake yet this past Sunday reaching nearly 5.0 on the ricter scale. Geologists have presented two possibilities for the constant earth flux, one being that this is a natural event such as a swarm of similar quakes that occurred in the 1980s that hit Enola, Arkansas. The other theory points to a natural gas exploration technique called "fracking" as a possible cause.

Weather: Interactive weather world map, short and long range forecasts for the UK and abroad Sky News UK Weather Forecast Temperatures over parts of the country dropped back to minus 4C on Thursday night, so it was a chilly start in many spots, but sunny. That sunshine will help push temperatures up to around 14C at best, but that should feel quite pleasant in light winds. It will be warmest over parts of the north and west, whilst North Sea Coasts will be cooler at times, with an on shore breeze. Through the afternoon, cloud will bubble up over central, southern and south-eastern areas; this will disappear this evening. So, it will be another chilly night tonight, with a touch of frost in rural areas. The emphasis on Saturday’s weather will be on dry conditions once again, with the best of the sunshine in the north and west. Central, southern and south-eastern areas will be more cloudy with one or two isolated showers.

BBC - Natural History Museum surveys New Forest biodiversity A snapshot of biodiversity in the New Forest is being taken by experts from the Natural History Museum. As part of a large-scale study project, they will revisit the area in 10 years' time to map any changes in the landscape. Forty plots within six habitats across the forest are being used to sample lichens, algae, insects and soil. A parallel project is taking place in Paraguay later this year. Ongoing study It is hoped this data will provide a baseline from which comparisons can be made when the study is repeated in 10 years time. Ian Barker, New Forest National Park Authority ecologist said: "The New Forest continues to be a magnificent landscape with an abundance of really special wildlife. "Insects, lichen and soils - which are the building blocks of biodiversity are often overlooked because people are generally more interested in the bigger species such as birds. The New Forest is the most densely populated national park in the UK and has over 13 million visitors each year.

Trouble in Farm City, and How You Can Help – EcoLocalizer Food Published on April 7th, 2011 | by Patricia Larenas Oakland Urban Farmer Novella Carpenter Urban farmer extraordinaire, Novella Carpenter, has recently hit a wall of bureaucracy with the city of Oakland that threatens the very existence of her small farm. Carpenter is the author of the popular and engaging book “Farm City: The Education of an Urban Farmer”, and has been raising food on an open parcel of land that she owns in Oakland. Although the city of Oakland is slated to change the law to allow growing vegetables, the one banning livestock will remain. “The deal is that growing any food on an ‘empty lot’ in the City of Oakland is illegal. Transforming More Vacant Lots into Urban Farms Why should we care or act to help prevent the death of this small urban farm? Farms are no longer way out in the country somewhere; they might be on your city street corner, or growing atop the suburban neighborhood rooftop next door. Cover via Amazon Photo: Michelle Renee’s Gardening About the Author

Botany Department, Smithsonian Institution Ocean Biogeographic Information System New Bolivian Law Would Give Rights to Nature | Care2 Healthy & Green Living By Erin La Rosa, ecorazzi It’s an annoying fact that not everyone recycles or turns the lights off or makes efforts to so much as conserve water. So, what if the government stepped in and forced everyone to do all of those things? That’s what lawmakers in Bolivia are taking steps toward with their “Law of Mother Earth” bill. It’s a piece of legislation that would grant nature equal rights to humans. The laws would be the first of their kind, with 11 in total, and would recognize that the planet has an equal right to be protected. The Guardian outlined the laws as: “the right to life and to exist; the right to continue vital cycles and processes free from human alteration; the right to pure water and clean air; the right to balance; the right not to be polluted; and the right to not have cellular structure modified or genetically altered.” Hopefully Bolivia’s bold move will lead to laws like this being implemented elsewhere! (via Huffington Post)

Natural lovers., All natural beauties to be experienced by each individual., by mdspatsy Apr 7