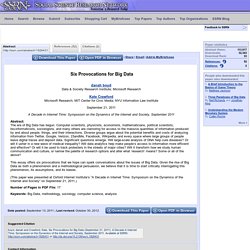 Computer scientists, physicists, economists, mathematicians, political scientists, bio-informaticists, sociologists, and many others are clamoring for access to the massive quantities of information produced by and about people, things, and their interactions. Diverse groups argue about the potential benefits and costs of analyzing information from Twitter, Google, Verizon, 23andMe, Facebook, Wikipedia, and every space where large groups of people leave digital traces and deposit data.

Significant questions emerge. Will large-scale analysis of DNA help cure diseases? Or will it usher in a new wave of medical inequality? This essay offers six provocations that we hope can spark conversations about the issues of Big Data. (This paper was presented at Oxford Internet Institute’s “A Decade in Internet Time: Symposium on the Dynamics of the Internet and Society” on September 21, 2011.)

Six Provocations for Big Data by <!>danah <!>boyd, Kate Crawford. Changes We Can Expect as Big Data Analytics Takes Off. We find ourselves in the midst of a surge in big data use. 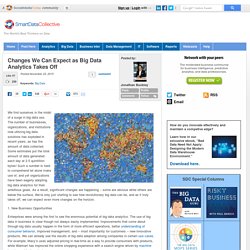 The number of businesses, organizations, and institutions now utilizing big data solutions has exploded in recent years, as has the amount of data collected. Some estimates put the total amount of data generated each day at 2.5 quintillion bytes! Such a number is hard to comprehend let alone make use of, and yet organizations have been eagerly adopting big data analytics for their ambitious goals. As a result, significant changes are happening -- some are obvious while others are below the surface. We’re only just starting to see how revolutionary big data can be, and as it truly takes off, we can expect even more changes on the horizon. 1. Enterprises were among the first to see the enormous potential of big data analytics. 2. The more organizations use big data, the more they need the right personnel that understands it. 3.

Big data isn’t all about business. 4. Big Data & the social sciences. This is the first in a series of posts that will examine the big data phenomenon from the point of view of the social sciences (I am historian by training, but I will also try to bring in perspectives from sociology, anthropology, and philosophy). 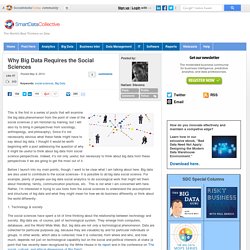 Since it’s not necessarily obvious what these fields might have to say about big data, I thought it would be worth beginning with a post addressing the question of why it might be useful to think about big data from social science perspectives. Indeed, it’s not only useful, but necessary to think about big data from these perspectives if we are going to get the most out of it. Before I launch into my main points, though, I want to be clear what I am talking about here. Big data are also used to contribute to the social sciences– it is possible to do big data social science. For example, plenty of people use big data social analytics to do sociological work that might tell them about friendship, family, communication practices, etc. 1. 2. 3. Corruption Perceptions Index (CPI) - Dataset - Frictionless Open Data. 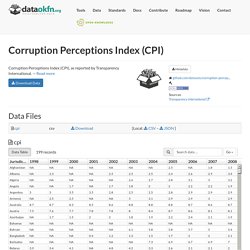 ##Data The data is sourced from Transparency International. The Corruption Perceptions Index (CPI) ranks countries/territories in terms of the degree to which corruption is perceived to exist among public officials and politicians. It draws on different assessments and business opinion surveys carried out by independent and reputable institutions. It captures information about the administrative and political aspects of corruption. Note: The scale of the CPI is 0-10 from 1998 to 2011, and 0-100 from 2012 onwards, due to an update to the methodology used to calculate the CPI in 2012. More information about the index and methodology can be found here. Information Geographies.

Open Data Watch Indexes of Data Quality and Openness. This article reviews three indexes that assess the openness or quality of data produced by national governments. 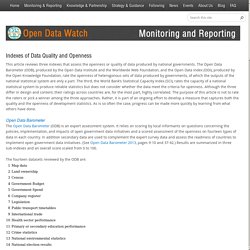 Rankings. To create a global ranking, we aggregated the sub-indexes of the Open Data Barometer. 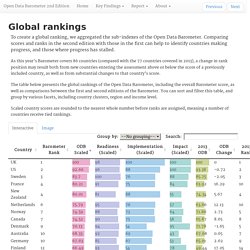 Comparing scores and ranks in the second edition with those in the first can help to identify countries making progress, and those where progress has stalled. As this year’s Barometer covers 86 countries (compared with the 77 countries covered in 2013), a change in rank position may result both from new countries entering the assessment above or below the score of a previously included country, as well as from substantial changes to that country’s score. The table below presents the global rankings of the Open Data Barometer, including the overall Barometer score, as well as comparisons between the first and second editions of the Barometer. You can sort and filter this table, and group by various facets, including country clusters, region and income level. Scaled country scores are rounded to the nearest whole number before ranks are assigned, meaning a number of countries receive tied rankings.

Analysis. Place overview 2013. Out of the box. ONE night last year Jim Rich came home from a basketball game in Texas with an excruciatingly painful leg. 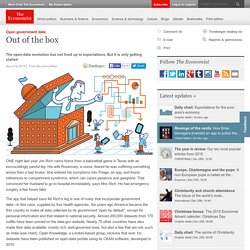 His wife Rosemary, a nurse, feared he was suffering something worse than a bad bruise. She entered his symptoms into iTriage, an app, and found references to compartment syndrome, which can cause paralysis and gangrene. That convinced her husband to go to hospital immediately, says Mrs Rich. He had emergency surgery a few hours later. The app that helped save Mr Rich’s leg is one of many that incorporate government data—in this case, supplied by four health agencies. The deluge of transport timetables, crime logs, pollution readings, property-tax records and the like has been a boon. There’s money in free stuff A few firms have already grown fat on open data. In hundreds of cities, commuters use free smartphone apps to check bus arrival times or work out how to get from A to B.