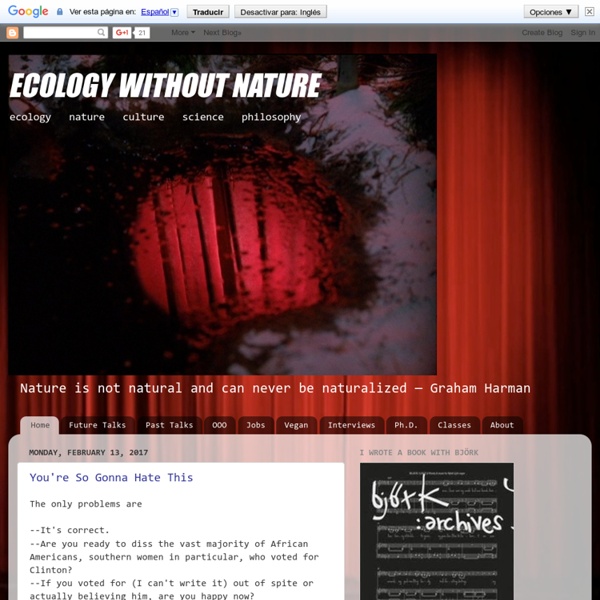 New Materialism and/or Who is the agent? | Philosophies Conceptual Composition 14: New Materialisms Who is the author of a portrait photograph? Traditionally, the credit has been ascribed to the person who holds the camera and pushes the shutter button. However, as anyone who has been on either side of the portrait photograph situation knows, the person being portrayed is often active and contributes to the work that produces the photograph as well – be it through demands on photographic composition, through putting on the right smile or other reasons. Depending on situation, the credit should be more justified were it to be shared between the parties, in varying degrees of course. After all, there could be no portrait photograph without a person to portrait. Who is the agent? New materialism is a collective name for recent currents and developments within the social sciences and humanities. Photograph taken by (and also partly depicting) the author. Readings: Like this: Like Loading...

faslanyc Feminism mammoth // building nothing out of something Things have been terribly quiet here at mammoth this fall. (Assuming that by “here” we mean “here, on the blog”; they’ve been quite busy if by “here” we mean “here in Ohio and Virginia”, which is where I’ve physically been. Hopefully I’ll get a chance to recap those adventures soon — there’s been quite a bit to write about.) DredgeFest Louisiana is a symposium, field expedition, and speculative design workshop about the human manipulation of sediments, from the infrastructural constraint of the Mississippi River at a continental scale to bright orange erosion control fences bulging with wet mud in a spring downpour on a suburban construction site. It will run January 11-17, 2014: a full week, though the individual components are two days (symposium), one day (tour), and four days (workshops). It will move between New Orleans and Baton Rouge. Read on for much more detail about the event theme and components. At the same time, south Louisiana is shrinking.

BLDGBLOG academia immanence is understood as the site where signi ﬁ cance and sub-stance, thought and matter, human agency and material objectivity,must be consubstantial (Kirby 77). as Matter, the photonegative of Reason or Mind (van derTuin and Dolphijn 164), but rather as a eld of distributed agency.Humans share this horizon with countless other actors, whoseagency regardless of being endowed with degrees of intentionality forms the fabric of events and causal chains. in short, every emergence is seen as the concretization of material and semiotic discursive dynamics, and therefore bequeathed with the possibility of carrying meanings and with a historical (namely, narrative) dimen-sion. [r]ocks and winds, germs andwords, are all different manifestations of this dynamic materialreality, or, in other words, they all represent the different ways inwhich this single matter-energy expresses itself ecocriticism$ c, and cognitivepractices as well as (Coole and Frost 3). xenobiotic agents, and all kinds of messy matter Vibrant ﬂ

New Materialisms academia Material Ecocriticism and the Creativity of Storied Matter serpil oppermann abstract Situated in the conceptual horizons of the new materialist paradigm, material ecocriticism views matter in terms of its agentic expressions, inherent creativity, performative enactments and innate meanings. It asks us to rethink the questions of agency, creativity, imagination, and narrativity. Taking into account material-discursive practices (Karen Barad) and material-semiotic processes (Donna Haraway), material ecocriticism claims that matter is endowed with meanings and is thick with stories, manifesting as “storied matter.” narrative agency,” a material ecocritical conceptualization of matter s expressive capacity. Despite its increasingly multivalent deﬁnitions, proliferating branches, and theoretical standpoints, ecocriticism has always retained a distinct interest in the signiﬁcance of the material world, recently framing its dynamics within the conceptual horizon of the new materialist paradigm. 1.

Alternative Higher Education Cultural Studies Association 2016 Cultural Studies Association (CSA) Conference Fourteenth Annual Meeting of the Cultural Studies Association (US) Villanova University, Villanova, Philadelphia, Pennsylvania 2-5 June, 2016 Important Dates for Second Call for Proposals: February 1, 2016: Submission System Opens (Membership and Registration also open -- You must be a member to submit!) The Cultural Studies Association (CSA) invites proposals from its current and future members for participation in its fourteenth annual meeting. The theme, Policing Crises Now, is prompted by and departs from the rich and diverse innovations and provocations of Policing the Crisis (1978), a groundbreaking work generated by a collective of scholars, including and facilitated by Stuart Hall. Topics that might be addressed include but are not limited to: We welcome proposals from scholars contributing to cultural studies who may be located in any discipline, inter-discipline, or scholarly field. Important Dates for First Call for Proposals: