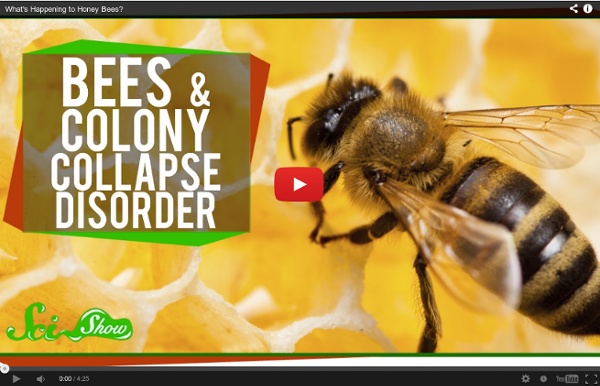 More evidence links pesticides to honeybee losses Photo by Rebecca Reardon. It’s been three weeks since beekeepers filed a petition with the Environmental Protection Agency (EPA) to remove clothianidin — the pesticide widely suspected to be wreaking havoc on honeybee populations — from the market. In that time three studies have been released that strengthen the link between bee die-offs and neonicotinoids (neonics), the chemical family of which clothianidin is a member. Here’s what they found: Study No. 1: Bees exposed to pesticides are getting lost. French researchers found that honeybees exposed to the neonic pesticide thiamethoxam had trouble finding their way back to their hives — no small problem for a foraging species. Study No. 2: Bee colonies exposed to pesticides are smaller and the ratio of males to females is way off. Study No. 3: The more pesticides bees are exposed to, the faster they die. Bonus irony: High fructose corn syrup is bad for bees too. Let’s get this straight.

Monsanto buys leading bee research firm after being implicated in bee colony collapse (NaturalNews) Amid all the controversy over genetically-modified (GM) crops and their pesticides and herbicides decimating bee populations all around the world, biotechnology behemoth Monsanto has decided to buy out one of the major international firms devoted to studying and protecting bees. According to a company announcement, Beeologics handed over the reins to Monsanto back on September 28, 2011, which means the gene-manipulating giant will now be able to control the flow of information and products coming from Beeologics for colony collapse disorder (CCD). Since 2007, Beeologics has been studying CCD, as well as Israeli Acute Paralysis Virus (IAPV), for the purpose of coming up with intervention-based ways to mitigate these conditions. Now that Beeologics is owned and controlled by Monsanto, the company is sure to completely avoid dealing with the true causes of CCD and IAPV as they pertain to Monsanto’s crop technologies — GMOs and their chemical counterparts.

Illinois illegally seizes Bees Resistant to Monsanto’s Roundup; Kills remaining Queens The Illinois Ag Dept. illegally seized privately owned bees from renowned naturalist, Terrence Ingram, without providing him with a search warrant and before the court hearing on the matter, reports Prairie Advocate News. Behind the obvious violations of his Constitutional rights is Monsanto. Ingram was researching Roundup’s effects on bees, which he’s raised for 58 years. “They ruined 15 years of my research,” he told Prairie Advocate, by stealing most of his stock. A certified letter from the Ag Dept.’s Apiary Inspection Supervisor, Steven D. Chard, stated: “During a routine inspection of your honeybee colonies by … Inspectors Susan Kivikko and Eleanor Balson on October 23, 2011, the bacterial disease ‘American Foulbrood’ was detected in a number of colonies located behind your house…. Ingram can prove his bees did not have foulbrood, and planned to do so at a hearing set in April, but the state seized his bees at the end of March. Source: www.globalresearch.ca Eddie (2136 Posts)

profit motive has no conscience Without honeybees, we may cease to be If you like almonds, then 2013 brought some bad news. Each year, honeybees from across the country make the trek to California, which grows 80 percent of the world’s almonds, to pollinate the almond crop. But bees have been dying in unusually large numbers for several years now, and this year appears worse than most. The problems we face if we don’t have healthy populations of pollinators, particularly honeybees, extend beyond almonds. Across the pond, the European Union has made major strides in shedding light on the role of certain pesticides in honeybee deaths. The pesticides in question are called neonicotinoids. New York beekeeper Jim Doan ended last year with about 700 hives. For a beekeeper, splitting your hives means a certain amount of sacrifice, because two smaller hives replace each larger one, and you must let each hive build up its numbers and its honey before you harvest any yourself. From mid-June onward, Doan watched his bees die. “In July, we had losses. Yup.

Scientists discover what’s killing the bees and it’s worse than you thought - Quartz Universal Basic Income (UBI) proposals are gaining in popularity across the political spectrum. The measures would see governments hand a set monthly income to every single citizen within a country, either in addition to existing benefits or in place of them (depending on the details of the particular UBI proposal). Left-wing fans favor UBI’s ability to eradicate absolute poverty, while right-wing libertarians are drawn to its simplicity and reduction in bureaucracy. In Silicon Valley, startup investment firm Y Combinator has plans to fund a basic income experiment in the US, while Finland announced last year it would conduct its own extensive experiment. But how feasible is UBI to implement in reality? We spoke to five UBI experts to get their take on the practicalities of the scheme. Matthew Zwolinski, associate professor of philosophy at the University of San Diego: The main changes we need to see to introduce UBI are largely conditions of public acceptability.

The silence of the bees: government refuses to act on pesticide evidence | Environment Here's an illustrative tale of how science is used and abused in government policy making. In some circumstances, as with the imminent badger cull, you can take scientific evidence and extrapolate it to breaking point in order to justify the decision you have already taken. Today, on the issue of bees and pesticides, we see the opposite. So extrapolation is fine if you like where it takes you, but abhorrent if you don't. The bee fiasco began in March with the publication of two studies in Science. Professor Mickaël Henry, at INRA in Avignon, France, who led the "disappeared" bees study was under no illusion about the implications of his findings: "Under the effects we saw from the pesticides, the population size would decline disastrously, and make them even more sensitive to parasites or a lack of food." These high profile studies - and others - prompted the UK's environment ministry (Defra) to investigate. Lastly, Defra states: Regulation needs to be based on all the science.

Monsanto Invests in Pollinator Research, Ignores Effects of Pesticides Washington, DC--(ENEWSPF)--October 28, 2011. St. Louis-based chemical and seed giant Monsanto Co. has purchased a company called Beeologics, which has developed a product intended to counteract viral agents that plague honey bee colonies in an attempt to stem the effects of Colony Collapse Disorder (CCD). However, advocates wonder whether the antiviral agent will result in any significant decline of CCD when bees around the country and across the world continue to be exposed to highly toxic pesticides that are known to have serious effects on a range of pollinators, including honey bees. Beeologics was founded in 2007 and is headquartered in both Florida and Israel. Efforts to counteract CCD are commendable, as a range of factors, including viruses as well as colony invaders such as the Varroa mite, are thought to contribute to CCD. Some European and U.S. scientists postulate that losses of biodiversity and food resources, due to climate change, have intensified the problem.

How to Plant a Honey Bee Friendly Garden | The Adventures of Thrive Farm In the winter of 2006 the honey bee population began to die out. Since then, as much as 70% of some bee populations have died as a result of Colony Collapse Disorder (CCD). Seventy farm grown crops, about one-third of our natural food supply, rely on honey bees for pollination. Instruction Honey Bee Friendly Plants Attract and nourish honey bees with nectar producing plants. Long Blooming Flowers Plant long blooming plants, or a variety of plants that will bloom at different times throughout the spring and fall. Honey Bees Need Water Provide a pond, a fountain, or some other fresh water source. Native bees will make their homes in sand Provide a space in your garden for native bees to make their home. No Pesticides or Herbicides Do not use pesticides and herbicides. Like this: Like Loading...

UPDATED: 25,000 Bumble bees found dead in a Target parking lot Target shoppers in Wilsonville, Oregon found a tragedy in the parking lot as tens of thousands of of bumble bees were found dead and dying on the pavement, along with honey bees and ladybugs. Shoppers notified Rich Hatfield, a conservation biologist with the Portland-based Xerces Society of Invertebrate Conservation, who went to the scene to investigate. Because the bees were mostly clustered under dozens of European linden trees, the organization believes the cause of the deaths likely involves acute pesticide poisoning or a poisonous species of European linden tree. © Rich Hatfield of The Xerces Society 2013 “They were literally falling out of the trees. The Oregon Department of Agriculture arrived to take samples from the trees to determine if a pesticide was used. Update: According to the International Business Times: Oregon officials say preliminary results point to an insecticide that was used on the nearby European Linden trees. And Mother Nature Network writes: From The Oregonian: