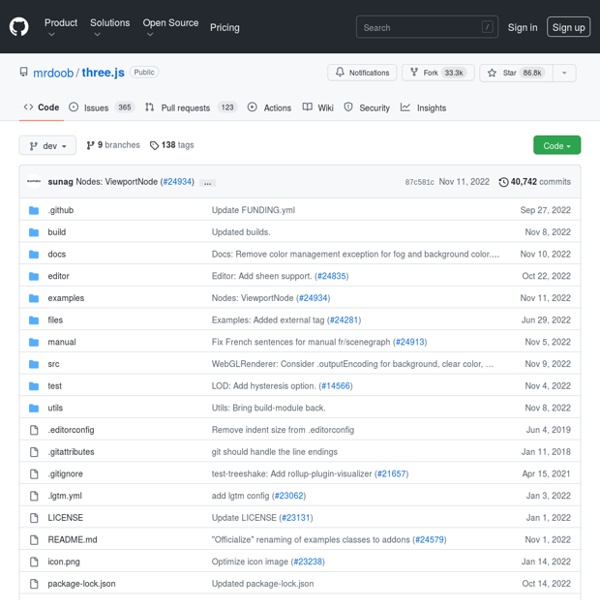 README.md three.js JavaScript 3D library The aim of the project is to create a lightweight 3D library with a very low level of complexity — in other words, for dummies. The library provides <canvas>, <svg>, CSS3D and WebGL renderers. Examples — Documentation — Migrating — Help

13 Chart and Graph plotting javascript plugins There are more and more Javascript chart and graph plotting solutions are being released and available for free online. I work on a complicated graph for a website before, we used highchart as the solution, during that time, there isn't a lot of plugins to choose from, but now, we can easily find many very capable charting libraries. Personally, the rise of this kind of plugins are due to: Flash used to be the best solution, but everyone is moving on from there.Modern browsers and powerful computing make it possible to render live data easily.Maturity of different technologies in drawing vector: VML, SVG and Canvas.

WebGL Water Loading... Made by Evan Wallace This demo requires a decent graphics card and up-to-date drivers. If you can't run the demo, you can still see it on YouTube. Interactions: holmes.css - CSS Markup Detective What does it do? The holmes.css file will display either an error (red outline), a warning (yellow outline), or a deprecated style (dark grey outline) for flags such as: Missing required attributes on tags, such as name attributes on inputs (lots of these) Potentially improvable markup, such as links with href="#" Deprecated and Non-W3C Elements - see W3C.org's article on obselete tags Non-W3C Attributes - as above, just the most important ones since there are MANY Thanks to Anthony Mann, holmes now displays an informative error message when you hover over the element.

Three.js: Importing a Model This post discusses a small piece of code that uses the three.js library to load a 3D collada scene. Upon starting to write this blog post I thought I’d take a look at some of the problems I’d encountered on the way. To my surprise I realised that I probably had enough information for two posts rather than just one. CopperLicht - JavaScript 3D Engine using WebGL Commercial grade WebGL 3D engine with editor CopperLicht is a WebGL library and JavaScript 3D engine for creating games and 3d applications in the webbrowser. It uses the WebGL canvas supported by modern browsers and is able to render hardware accelerated 3d graphics without any plugins. Optimized, Fast and Free flotr2 Introduction Flotr2 is a library for drawing HTML5 charts and graphs. It is a branch of flotr which removes the Prototype dependency and includes many improvements. Features: mobile support framework independent extensible plugin framework custom chart types FF, Chrome, IE6+, Android, iOS lines bars candles pies bubbles

Inaccessible is Accessible If your a 3d modeller who works with blender(or other software) and knows very little or no coding, this tutorial is for you. In a few easy steps you can convert your existing models to webgl and put them on your website. . tutorial is with Blender and x3d.. but other software can be used as well. note: also check out and for no hassle online model hosting. Font sizing with rem Determining a unit of measurement to size our text can be a topic of heated debate, even in this day and age. Unfortunately, there are still various pros and cons that make the various techniques less desirable. It's just a matter of which less-desirable is most desirable. There are two main techniques that are extolled:

Three.js: Simple Collision Detection I’ve been spending some time trying to work out how to perform basic collision detection with the three.js library. After a combination of Googling, looking at the three.js source code and looking at the sample code on the three.js github pages I’ve managed to get something working. I found the best collision detection example at Mr.Doob’s three.js repository on github. In fact that are a number of examples there. These examples use a couple of utility files, namely CollisionUtils.js and Collisions.js that can be found along with the example code.

progressive <canvas> pie charts Peity (sounds like deity) is a jQuery plugin that converts an element's content into a <svg> mini pie 2/5 donut 5,2,3 line 5,3,9,6,5,9,7,3,5,2 or bar chart 5,3,9,6,5,9,7,3,5,2 and is compatible with any browser that supports <svg>: Chrome, Firefox, IE9+, Opera, Safari. Download version 3.2.1 Uncompressed 8.7Kb jquery.peity.js Minified 3.6Kb (+gzipped 1.7Kb) jquery.peity.min.js Blender export — X3DOM v1.4-dev documentation Converting Blender scenes into X3DOM webpages is pretty simple: Blender already supports direct X3D export even so there are some issues (Don Brutzman wrote about). Blender Version 2.4 seems to export some more nodes (e.g. lights), but in general it works. We will explore this more in the future, but an exported X3D file (such as the little horse shown below) may afterwards be easily be integrated into an HTML webpage using X3DOM. Just finish your model in Blender and export to x3d file format (see next image).