7 Ways to Get Rid of Fireflies In a Blender Render. 12 Blender Addons Everyone Should Use. Barely a day goes past without a new addon being released. 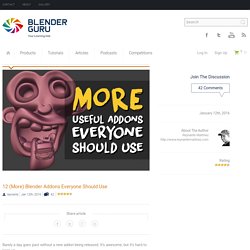 It’s awesome, but it’s hard to keep up. So I’ve searched the community to find 12 of the best addons available today. Last year we shared this list of free addons, but a year has passed and the Blender Market is booming. So in this post we’ll look at both the best free and paid addons available… 1. What it does: Allows you to quickly and easily import your objects into other scenes.

Probably one of the coolest free addons that speeds your workflow. 2. What it does: Makes retopologizing a mesh, much, much faster and easier. Probably the highest quality paid addon around. This addon exists because when you sculpt something, you’re not thinking about structure of your mesh. 3. What it does: Generates beautiful trees.

This works much like the Sapling Addon that comes with Blender, however, it has more improved features and a simplified interface for easier growing of trees. 4. 5. 3D Tree Growing Software - The Grove. V-Ray for Blender - Rendering Software. Product Overview. 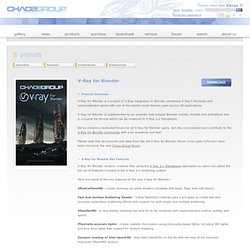 How to Add Dust to Any Model. You’ve likely heard artists harp on about how important “attention to detail” is. 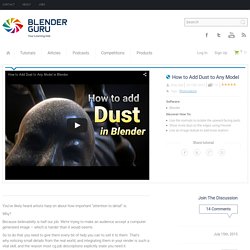 Why? Because believability is half our job. How to Create Realistic Puddles. Start with whatever material you’d like to make wet. 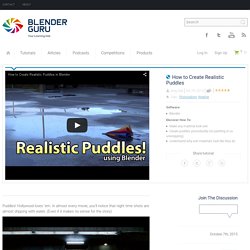 In this case, we’ll use a simple concrete material: For the layer of water, add a Glossy shader with the Roughness on 0, and mix it with the concrete material: Since all materials are more reflective at the edges, add a Fresnel node and connect it to the Mix Shader’s factor input: Now we need to account for a physical phenomenon known as Refractive Mismatch. Fake reflections in Cycles. Current community your communities. 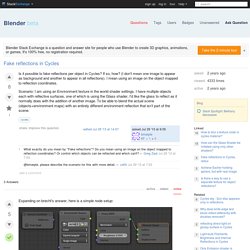 How to Add Dust to Any Model. The Cycles Input Encyclopedia. Sometimes the User Manual is too technical and doesn’t explain things in a way that us artists can easily understand. 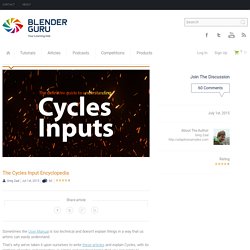 That’s why we’ve taken it upon ourselves to write these articles and explain Cycles, with its plethora of nodes and properties, in simple and practical terms that you can relate to. The Input nodes in Cycles are almost as complicated and plentiful as its shaders. Commonly Ignored Features #2: Proper HDR Lighting - Adaptive Samples. At the time Cycles came out in Alpha, I was playing around with HDR lighting in Blender internal. 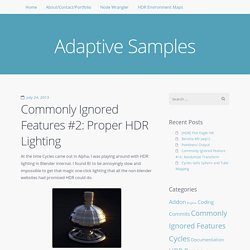 I found BI to be annoyingly slow and impossible to get that magic one-click lighting that all the non-blender websites had promised HDR could do. You might remember some fool using this in some tutorial… So when Cycles showed up, I figured the day was saved and all my problems would magically disappear. Cycles Strand Rendering - Page 44. Depth of Field in Blender. Depth of Field can be a beautiful effect, adding both aesthetic interest to an image, and serving a narrative purpose in drawing the viewer’s attention to the centre of attention. 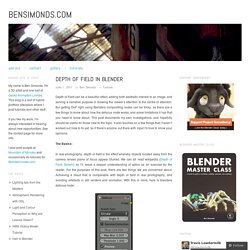 But getting DoF right using Blenders compositing nodes can be tricky, as there are a few things to know about how the defocus node works, and some limitations it has that you need to know about. This post documents my own investigations, and hopefully should be useful for those new to the topic. 7 Ways to Get Rid of Fireflies Once and For All. Fireflies are those tiny burnt out pixels, that ruin an otherwise great render. 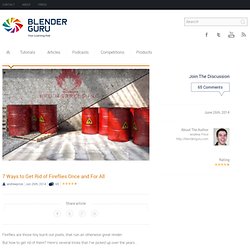 Buildbot. Cycles: Getting rid of Texture Interpolation - yay for blocky, no for blurry!! HiToday in IRC someone asked about how to disable the texture interpolation in Cycles. 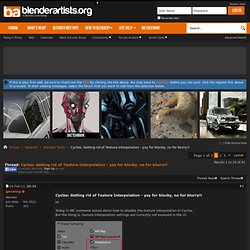 But the thing is, texture interpolation settings are currently not exposed in the UI. I came up with a Node Setup which scales the UV coordinates accordingly, so that it appears as if there was no interpolation happening.The usage of this Node Group is realy simple, just add the Group to your existing material and connect it to your UV inputs on the Textures.Here's my results: whitout/with my node group The used image textures were 3x3, 4x4, 5x5, 6x6 pixel big.

Blender 3D : How to reduce noise in Cycles using Despeckle filter / HD. 4 Easy Ways to Speed Up Cycles. Did you know that the Blender Internal render engine has been discontinued? *gasp! * I know. Apparently the decision was made 2 years ago that the Internal Render Engine development would cease, and be focused on Cycles instead. For some reason this news was never broadcast to the community, so I’m doing it right now. What does this mean? I posted this news recently on the Blender Guru Facebook Page and besides the initial shock, the overwhelming response was “Noooo! But here’s the thing: Cycles can be fast. In the words of Thomas Dinges (developer), “The Internal rendering engine was built for speed, but if you wanted realism you had to turn stuff on. [How-To] Lens flare in Blender compositor through IndexOB. Share: Hi all! With this short tutorial I’ll show you how to enlight your scene projectors, flashes, leds, lamps, lights and all those objects that are supposed to emit light thought lenses.

An example: the image below is produced with this technique. Here there is an object for the projector and a second object for the lens, that is composited to re-create the flare and added to the final image. Render Region? Build a Better Shadow Pass – Blender Cycles (Transparent Shadows) News.