Nimble Collective. 4 Easy Ways to Speed Up Blender Cycles - Blender Guru. Did you know that the Blender Internal render engine has been discontinued? 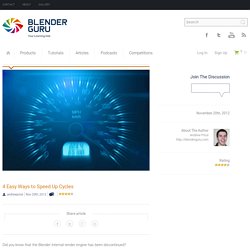 *gasp! * I know. Apparently the decision was made 2 years ago that the Internal Render Engine development would cease, and be focused on Cycles instead. For some reason this news was never broadcast to the community, so I’m doing it right now. What does this mean? I posted this news recently on the Blender Guru Facebook Page and besides the initial shock, the overwhelming response was “Noooo! But here’s the thing: Cycles can be fast.

In the words of Thomas Dinges (developer), “The Internal rendering engine was built for speed, but if you wanted realism you had to turn stuff on. So without further ado, here’s a list of 4 Easy Ways You Can Speed Up Cycles… (Russian Translation) 1. This may sound like an obvious tip to some of you, but a lot of users aren’t aware just how much faster GPU rendering is. Take this scene for example: BMW Benchmark Scene by Mike Pan – Download it here. On a GPU it renders in 46 seconds. 2. 3. 4. 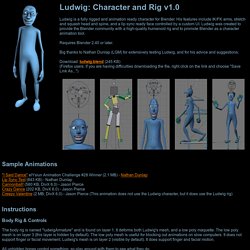 (580 KB, DivX 6.0) - Jason PierceCrazy Dance (202 KB, DivX 6.0) - Jason PierceCreepy Valentine (2 MB, DivX 6.0) - Jason Pierce (This animation does not use the Ludwig character, but it does use the Ludwig rig) Instructions Body Rig & Controls The body rig is named "ludwigArmature" and is found on layer 1. All unhidden bones control something, so play around with them to see what they do. Here are some of the more important bones: (A "G" in parenthesis means that you should move the bone, an "R" means you should rotate it. Body: Pelvis - Independent control of the pelvic area (G/R) IK_Spine - IK handle for the spine (G/R) Shoulders - Convenient way to rotate both of the shoulder/clavicle bones at the same time (R) Torso - Parent of entire upper body. 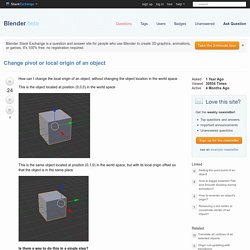 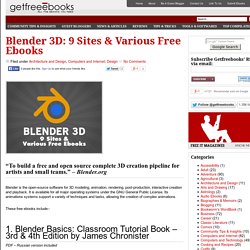 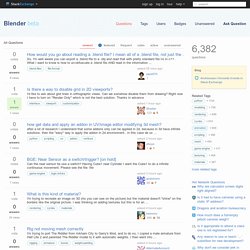 So, I'm well aware you can export a .blend file to a .obj and read that with pretty standard file i/o in c++. Blender 3D: HotKeys/3D View/Object Mode.