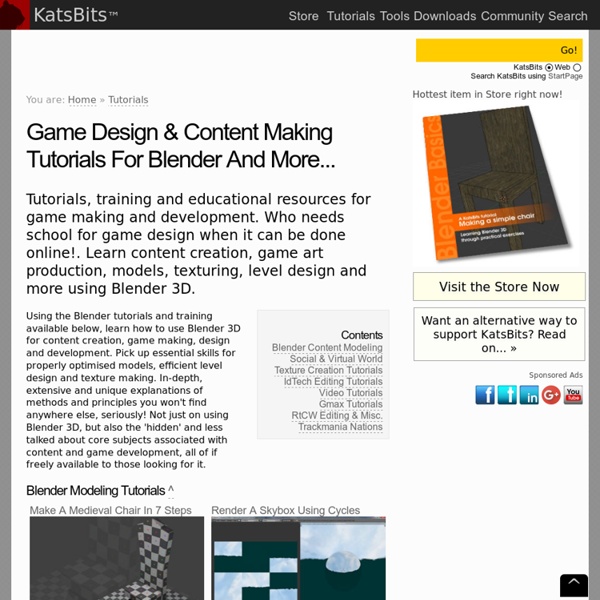 Normal Mapping Tutorial for Games This tutorial will cover nearly everything you will need to know about creating normal maps; This includes the low oly model, high oly model, correctly laying out your UV's, how to mirror a normal map with an object, baking the texture, adding details in photoshop and much more. Normal map basics: Let’s start very simple. To bake out a normal map from a high poly model to a low poly model, select the low poly and press 0, not on the number pad, but the zero located above the o and the p keys. 'Projection Mapping' is where you select the high poly model. After selecting your high poly mesh, choose the UV's you wish to use, this will usually be set to 1. Before I show you any rendered images, I should go into a bit of theory behind normal maps. This is the basics of smooth groups and hi-poly model baking. This theory is important to understand before you start to bake out high to low poly models. The image on the left is a model with hard edges. Your low res model must be a flat plain.

Uv mapping high detail models for games [Archive] Generally, your lowpoly model and your sculpting "cage" will not be the same mesh anyway, so this isn't really a problem. A cage is optimized for zbrush, this means all quads, and evenly sized, square quads. Anything else and you'll run into problems when detailing. A lowpoly will be optimized to use the fewest amount of triangles as possible, and to remove excess geometry that doesn't affect the shape/silhouette of the model. Generally, there isn't much reason to UV your high, unless you have some really specific need to. Do not attempt to modify normals after changing uvs or changing your mesh, a normals map is highly dependent on your lowpoly mesh normals and uv orientation. So the common workflow looks like this: 1.

Workflow: Altering the base mesh... No problem. More info incoming. Heads up: As you work and learn more, you're almost always going to find new problems, and new workarounds. Every step by step process I've ever used has failed at one point or another, but they help you figure out new solutions. As for adding new volume to a single model, here are a few possibilities: ******************************** Rule: All new volumes/additions need something of nearly equal volume to press/project against, if you intend to transfer high res details from one model to another. Lets say we want to add an arm. Method #1: Zspheres -Make sure your main model is active. -Polygroups > Group Visible for the body. -Deactivate the Wield button. We should now have 2 brand new models in the Tool menu area. -Select the low poly merged model from your Tool list. Unified models import and export without changing size during the process. -Export the merged model, then import it to your favorite modeling program. -In Zbrush select a new zsphere.

How To: Create your own game company, Part One While it's a little cost prohibitive to start developing Xbox 360 or PS3 games from your bedroom, let's not forget games like Roller Coaster Tycoon and Alien Hominid went from humble beginnings to financially successful franchises. Although you'd have to spend hundreds of hours developing AAA titles, there are some ways to get slick games up and running quickly. I'm going to show you a few ways to do just that. In this installation we're going to look at the beginnings of your company. Starting with a great idea, creating all the necessary assets, and developing the prototype. Of course, nothing beats a great idea. The choices in platforms for a game makes a big difference in the tools you'll need to create everything. But if you're a hobbyist game creator, I'm assuming you're going to need graphics for your game, and a somewhat simplified game engine. The general workflow I'm assuming here is 1) create graphics and models, 2) create game code, 3) distribute.

How to Create 3D Computer Games: 8 Steps Edit Article Edited by Jack C, Zoe Volt, Martyn P, Peter B and 27 others Want to create your very own 3D computer game? Just don't know where to start? Ad Steps 1First of all, you have to know that making a simple 2D game such as Tetris is much more difficult than it looks. 8If you are finding it difficult to program a game from scratch, try using an existing engine such as Source or Unreal. Tips Nobody can say "You can't".If you are going to publish your computer game, create the game from scratch. Warnings Always back up your work if it is a big project, or face the possibility of losing everything you have done.Do NOT, under any circumstances (Unless it's extremely private, i.e. you are the only one that has access to it), use something that is not your work in your applications.

Texturing Resolution Tips - Page 1 - Free Texturing Tutorials for Maya A common question when new to texture mapping, is what resolution should textures be? This is assuming that you are going to be making your own in a 2D package, such as Photoshop, either from scratch or from a scan. Well, the first thing to do is ignore dpi settings. All you care about is the pixel by pixel resolution of the image. If you are scanning an image, most scan software will have you specify dpi. A 4"x5" photo scanned at 300dpi will yield a 5MB 1200x1500 pixel image. So, here's a simple example: you need to texture a doorway. Since 100% of the door is in the frame, then what percentage of the frame is it filling? So above is the texture we're going to put on the door. So here we go... 256x188 pixels. Looks ok in Maya... So after all this, we're ready to render... Now this example may seem simplistic, but that's the point. Hope this all made sense... :)

Basics of Creating UV Maps by Brian Immel This tutorial covers the basics of generating UV projections, editing UV points, exporting UV maps to Photoshop, and bringing the finished texture map back into Maya. This tutorial assumes that the user has a fundamental understanding of the Maya interface, has some knowledge of polygonal modeling, and has experience with editing raster-based images in Photoshop. Note: Some of the steps and proceeds may need adjusting if you are using version 6 and up. Editing UVs Open the UV Texture Editor by going to Windows > UV Texture Editor. Top Default UV Layout By default, when you create a polygonal object, the UVs go over the entire place. Mapping Strategies One quick way to get all the UVs back inside the upper right UV Grid, is to use the Automatic Mapping function found under Edit Polygons > Texture > Automatic Mapping. Use other projection tools to map out areas that you wish to use in high detail areas. Overlapping UVs Moving UVs To edit UVs, right-click hold and select UV(s). 1.

Normal map have UV line ..need help // Also what program are you modeling in? Cinema4d v13. I've had the problem regardless of what program I've modeled in - c4d, zbrush, silo, and maya. I've manually UV unwrapped in 3dcoat and tried AUV tiles in zbrush.

Video Game Beards (And Hair) Are More Interesting Than You Think Know why Eidos and AMD made such a big deal about Lara’s hair in the new Tomb Raider? Because video game hair is normally pretty ugly, and something incredibly hard to get right. The Last Of Us gets it about as right as the current generation probably can, though, with all those wavy curls and bushy beards, and having seen these terrific examples earlier today, I thought it’d be interesting to show you how it’s actually done. In the old days, hair was simply sprites. Today, though, in order to get hair looking “natural”, artists basically (and I’m simplifying here) arrange sheets of polygons atop each other, which when textured give the appearance of layers of hair, which not only look real in screenshots, but can move independently (and thus realistically) when you’re playing. You might not notice this when you’re playing, if the developers have done a good job, and in the Last of Us, they’ve done a good job. Especially since they make Joel look infected.

Free Textures - (texture maps library) All Textures are free for personal use only, but Freelancers may use them for commercial purpose. The Free 3d Texture's Library is collection of very useful and handy Texture maps. Currently, the Free Texture Library is divided in four categories. \\\\ Click on Image to Download //// Go To free 3d models section //// Download free 3d models ! //// Download CGToolbar for more free textures! <<---- Point Of Return***......Go Back To HOME PAGE! NZGDA | New Zealand Game Developers Association Maya - Render normal maps with Mental Ray ? Okay, so I've run into a situation where I would like to render a baked normal map on my mesh with Mental Ray. I'm running into some strange problems with the rendering itself. Uploaded with ImageShack.us For troubleshooting purposes I have tried to completely blank the normal map (i.e. make it the default blue/purple normal color, it's still giving me the same result). Hence I've excluded the normal map as being the issue here. I have tried multiple shaders with this, regular maya blinns, MISSS shaders (which is what I want in this case), and MIA_MATERIAL_X_PASSES, and all of them are giving me very bad results when rendered with Mental Ray. I can however use a Blinn for example, and view the normalmap perfectly fine in High Quality/Hardware/Viewport 2.0-mode. In terms of solutions, I've found different things across the google-web, none that solves my situation really. And this: Well that just makes me dizzy... Any takers on this?

UDN - Three - DesignWorkflow Search public documentation: DesignWorkflow 日本語訳中国翻译한국어 Interested in the Unreal Engine? Visit the Unreal Technology site. Looking for jobs and company info? Questions about support via UDN? From concept to completion This document is intended to give some insight on the internal workflow for level creation at Epic Games. Starting from the art concept Once the concept for an environment has been approved by the art director and the lead designer for the project, it is given to the Level Designers (LDs) and the environment artists. breaking down the concept The LDs will begin identifying the simple structures in the maps, such as where buildings will be, and what rough shapes can be used to prototype the level. identifying key structures The artists work with their leads to identify major set pieces (hero pieces) that will be landmarks in a given area of the game. deriving modular mesh sets The gameplay concept Designer/Programmer interaction Gameplay prototyping in Kismet Mesh creation Scripting