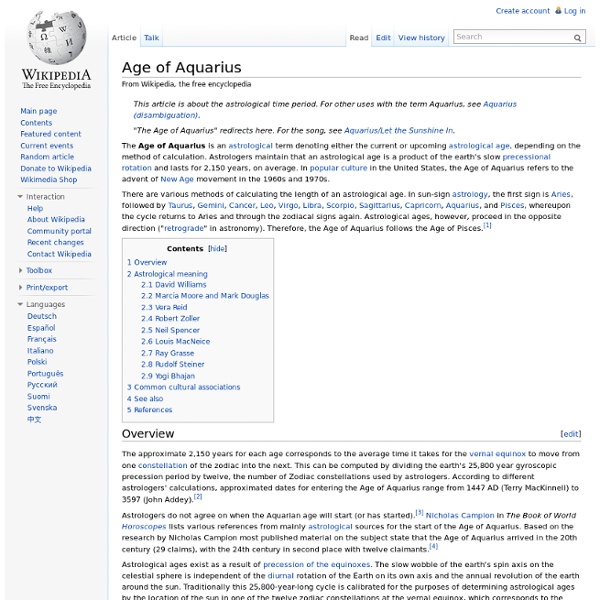 Overview[edit] The approximate 2,150 years for each age corresponds to the average time it takes for the vernal equinox to move from one constellation of the zodiac into the next. This can be computed by dividing the earth's 25,800 year gyroscopic precession period by twelve, the number of Zodiac constellations used by astrologers. Astrologers do not agree on when the Aquarian age will start or even if it has already started.[3] Nicholas Campion in The Book of World Horoscopes lists various references from mainly astrological sources for the start of the Age of Aquarius. Astrological ages exist as a result of precession of the equinoxes. Astrological meaning[edit] Astrologers believe that an astrological age affects mankind, possibly by influencing the rise and fall of civilisations or cultural tendencies. Many astrologers consider the appearance of many of these Aquarian developments over the last few centuries indicative of the proximity of the Aquarian age. David Williams[edit]

Astrological sign The concept of the zodiac originated in Babylonian astrology, and was later influenced by Hellenistic culture. According to astrology, celestial phenomena relate to human activity on the principle of "as above, so below", so that the signs are held to represent characteristic modes of expression,[1] or primary energy patterns indicating specific qualities of experience, through which planets manifest their dimension of experience.[2] The twelve sector division of the ecliptic constitutes astrology's primary frame of reference when considering the positions of celestial bodies, from a geocentric point of view, so that we may find, for instance, the Sun in 23º Aries (23º longitude), the Moon in 7º Scorpio (217º longitude), or Jupiter in 29º Pisces (359º longitude). Various approaches to measuring and dividing the sky are currently used by differing systems of astrology, although the tradition of the Zodiac's names and symbols remain consistent. Western zodiac signs[edit] ). ).

Reincarnation Reincarnation is the religious or philosophical concept that the soul or spirit, after biological death, begins a new life in a new body that may be human, animal or spiritual depending on the moral quality of the previous life's actions. This doctrine is a central tenet of the Indian religions.[1] It is also a common belief of various ancient and modern religions such as Spiritism, Theosophy, and Eckankar and is found in many tribal societies around the world, in places such as Siberia, West Africa, North America, and Australia.[2] In recent decades, many Europeans and North Americans have developed an interest in reincarnation.[6] Contemporary films, books, and popular songs frequently mention reincarnation. Conceptual definitions[edit] Temple door depicting Dashavatar-the ten avatars, Sree Balaji Temple, Goa. The word "reincarnation" derives from Latin, literally meaning, "entering the flesh again". Gilgul, Gilgul neshamot or Gilgulei Ha Neshamot (Heb. History[edit] Origins[edit]

Twelve Ages of the Zodiac A new Hu for a new Zodiacal Season: Hu was resurrected in the guise of Leo. It made sense at the time but down through the millennia it was to cause utter confusion for later generations, as the original Secret of Hu became lost. (See Part 2) The Sphinx at Giza was no longer considered to be the earthly representation of Hu, God the Creator, the Celestial Sphinx. Hu: Giver of Life in the Beginning.This title was usurped by Osiris. In the hieroglyphs for Hu's title "Giver of Life in the Beginning" the Lion, the Hemisphere, and the Pillar denote "the Beginning". Thoth: the Keeper of the Secrets However the Secrets of the arts, sciences, astronomy and hieroglyphics were not for the commoner to know about or understand because these were considered to be the ultimate Sacred Subjects, whose Sacred Secrets were fit only for the ears of the elite in remote Ancient Egypt. The Age of Aquarius:the Water Bearer pouring the Water of Life out of the Urn.

Wikimapia House Street City Country World 31381224 places Distance Measure About Wikimapia, All countries, USA, Canada, UK, Australia, New Zealand, Germany, Switzerland, Italy, France, Spain, Russia, India, Brazil ... Tags directory, Last adds, Tags page 2, Tags page 3, Tags page 4, Tags page 5, Tags page 6, Tags page 7, Tags page 8, Tags page 9, Tags page 10 ... Wikimapia is an online editable map - you can describe any place on Earth. Loading map... <br />We recommend to use a new browser, Firefox is preferrable. Classical planets in Western alchemy Extract and symbol key from 17th century alchemy text. Alchemy in the Western World and other locations where it was widely practiced was (and in many cases still is) allied and intertwined with traditional Babylonian-Greek style astrology; in numerous ways they were built to complement each other in the search for hidden knowledge (knowledge that is not common i.e. the occult). Astrology has used the concept of classical elements from antiquity up until the present day today. Most modern astrologers use the four classical elements extensively, and indeed it is still viewed as a critical part of interpreting the astrological chart. Planets and metals[edit] A table of alchemical symbols from Basil Valentine’s The Last Will and Testament, 1670 ce. Traditionally, each of the seven "planets" in the solar system as known to the ancients was associated with, held dominion over, and "ruled" a certain metal (see also astrology and the classical elements). See also[edit] Isaac Newton's occult studies

05 What Is The Plan? Age of Pisces The Age of Pisces, an artifact of the Precession of the Equinoxes, is the time span extending from about 200 B.C.E. (or up to 600 years even earlier) until the current day. From the viewpoint of the Earth, the sun appears to rotate around the ecliptic -- i.e. the sun’s apparent path among the stars during the year. This is also sometimes referred to as the Zodiac, i.e. the constellations of stars through which the Sun appears to pass. Astrology assumes the relevant position of the sun, as well as the Moon and the planets of our solar system, with respect to the constellations have specific meanings. Astrology, which has been handed down from some of the earliest historical records, also claims an impact on worldly affairs by virtue of the slow retrograde motion of equinoctial points along the ecliptic -- the latter known as the Precession of the Equinoxes. This Precession is due to the gravitational effects of the Sun and Moon on the Earth’s equatorial bulge. 600 B.C.E. Forward to:

Wikiquote Wikiquote is one of a family of wiki-based projects run by the Wikimedia Foundation, running on MediaWiki software. Based on an idea by Daniel Alston and implemented by Brion Vibber, the goal of the project is to produce collaboratively a vast reference of quotations from prominent people, books, films and proverbs, and to give details about them with appropriate attribution. Though there are many online collections of quotations, Wikiquote is distinguished by being among the few that provide an opportunity for visitors to contribute.[2] Wikiquote pages are cross-linked to articles about the notable personalities on Wikipedia.[3] Initially, the project was created solely in English; a later expansion to include additional languages was started in July 2004. History[edit] Growth of the largest eight Wikiquotes Multilingual cooperation[edit] In July 2004, about 70 subdomains were set up. See also[edit] References[edit] External links[edit] Official website

The Aquarian Age Astrological Aspects Many statements are being made in public mass media about the Aquarian Age. Frequently an observer will comment that the Aquarian Age has arrived, that it will last for this or that period of time, that it is the result of one or another astronomical or astrological phenomenon, that it has certain characteristics, or that, under its influence, human beings will be more apt to perform certain specific actions than others. In an attempt to clarify the confusion which exists about this subject, The Rosicrucian Fellowship teachings about the Aquarian Age are presented here. The Aquarian Age has not yet arrived, although its influences are already being felt, and it will not be fully with us for over six hundred more years-- or in approximately 2,600 A.D. Precession of the Equinoxes Two Zodiacs Orb of Influence Therefore, astrologers recognize what is called an "orb of influence." "As above, so below," and vice versa. Piscean Age Age of Innovations Universal Brotherhood

USAvsUS Signs of the Times Age of Cancer: 8640 to 6480 BC Cancer rules: Food, Agriculture, Houses and house building, Community, Motherhood, and Family. This age hosted the Neolithic Revolution and the invention of agriculture around the world. The traditional dates for the Neolithic Revolution are 9000 to 6000 BC, a rather exact fit for the Age of Cancer. The traditional area for this new activity was the Near East. This was part of a matrix that included Eastern and Mediterranean Europe, and the Nile river valley. Another agricultural matrix began as early as 9000 BC in Southeast Asia, up into central China. Houses were built and people settled into permanent year around communities, giving up the roving life of the hunter-gatherer. Age of Gemini: 6480 to 4320 BC Gemini rules: Movement, Trade, Communication, Hand/eye coordination, the Mind and ideas. The Age of Gemini opened up new vistas for exploration and interaction across large distances. Essentially all of our modern language families were created here.

Age of Aquarius: Considerations About the Start of the Age of Aquarius by Sepp Rothwangl Note: This article has been previously published on the website of Sepp Rothwangl, CALENdeRsign. The English translation and helpful ideas of this article is owed, with heartful thanks of the author, to Ms. Joan Griffith and Jake Bowman. See also the discussion of this matters at CALENdeRsign group at Yahoo What time is it really? When or where in time are we? Image 1: The positions of the borders of the Babylonian zodiacal signs Taurus, Gemini, Cancer, Leo and Virgo at about 150 BCE. Image 2: The positions of the borders of the Babylonian zodiacal signs Libra, Scorpio, Sagittarius and Capricorn at about 150 BCE. Image 3: Position of point of vernal equinox and borders of the Babylonian zodiacal signsAquarius, Pisces, Aries and Taurus at about 150 BCE. Image 5: Boundaries between the constellations Pisces - Cetus at about 1600 CE. Image 7: The IAU borders of the constellations between Pisces and Aquarius cross the combining lines of Aquarius 2.

Republic for the united States of America | Freedom is our right