El Tio. A Figure of El Tio in Potosí mines, Bolivia, 1993 El Tío (The Uncle), is believed in Cerro Rico, Potosí, Bolivia as the Lord of the underworld. 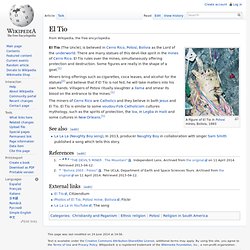 There are many statues of this devil-like spirit in the mines of Cerro Rico. El Tío rules over the mines, simultaneously offering protection and destruction. Some figures are really in the shape of a goat.[1] Miners bring offerings such as cigarettes, coca leaves, and alcohol for the statues[2] and believe that if El Tío is not fed, he will take matters into his own hands. The miners of Cerro Rico are Catholics and they believe in both Jesus and El Tío.

See also[edit] References[edit] External links[edit] Guédé. In Haitian Vodou, the Guédé (also spelled Gede or Ghede, pronounced [ɡede] in Haitian Creole) are the family of Loa that embody the powers of death and fertility. 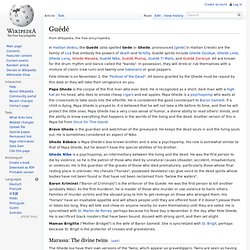 Guédé spirits include Ghede Doubye, Ghede Linto, Ghede Loraj, Ghede Masaka, Guédé Nibo, Guédé Plumaj, Guédé Ti Malis, and Guédé Zaranye. All are known for the drum rhythm and dance called the "banda". In possession, they will drink or rub themselves with a mixture of clairin (raw rum) and twenty-one habanero or goat peppers. Fete Ghede is on November 2, the "Festival of the Dead".

All boons granted by the Ghede must be repaid by this date or they will take their vengeance on you. Maya death gods. God A way as a hunter, Classic period The Maya death gods, known under various names, belong to only two basic types, respectively represented by the 16th-century Yucatec deities Hunhau and Uacmitun Ahau mentioned by Spanish Bishop Landa. 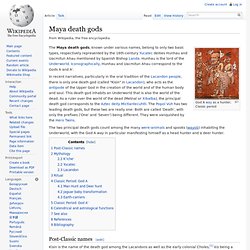 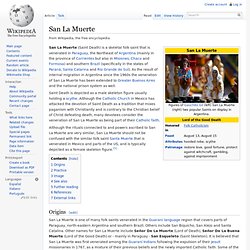 Although the Catholic Church in Mexico has attacked the devotion of Saint Death as a tradition that mixes paganism with Christianity and is contrary to the Christian belief of Christ defeating death, many devotees consider the veneration of San La Muerte as being part of their Catholic faith. Although the rituals connected to and powers ascribed to San La Muerte are very similar, San La Muerte should not be confused with the similar folk saint Santa Muerte that is venerated in Mexico and parts of the US, and is typically depicted as a female skeleton figure.[1] Origins[edit] San La Muerte is one of many folk saints venerated in the Guaraní language region that covers parts of Paraguay, north-eastern Argentina and southern Brazil.

Others include San Biquicho, San Alejo and Santa Catalina. Practice[edit] The San La Muerte devotion is characterized by a moral code that must be obeyed. Image[edit] See also[edit] Santa Muerte. Nuestra Señora de la Santa Muerte or, colloquially, Santa Muerte (Spanish for Our Lady of the Holy Death), is a female folk saint venerated primarily in Mexico and the United States. 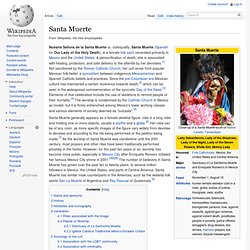 A personification of death, she is associated with healing, protection, and safe delivery to the afterlife by her devotees. Not sanctioned by the Roman Catholic Church, her cult arose from popular Mexican folk belief, a syncretism between indigenous Mesoamerican and Spanish Catholic beliefs and practices. Since the pre-Columbian era Mexican culture has maintained a certain reverence towards death,[2] which can be seen in the widespread commemoration of the syncretic Day of the Dead.[3] Elements of that celebration include the use of skeletons to remind people of their mortality.[4] The worship is condemned by the Catholic Church in Mexico as invalid, but it is firmly entrenched among Mexico's lower working classes and various elements of society deemed as "outcasts".[5]

Supay. Supay in the Andean diablada In the Aymara and Inca mythologies, Supay was both the god of death and ruler of the Ukhu Pacha, the Incan underworld, as well as a race of demons. 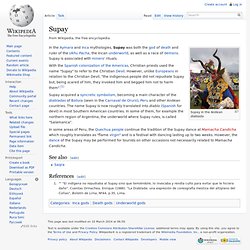 Supay is associated with miners' rituals. With the Spanish colonization of the Americas, Christian priests used the name "Supay" to refer to the Christian Devil. However, unlike Europeans in relation to the Christian Devil, "the indigenous people did not repudiate Supay but, being scared of him, they invoked him and begged him not to harm them".[1] Supay acquired a syncretic symbolism, becoming a main character of the diabladas of Bolivia (seen in the Carnaval de Oruro), Peru and other Andean countries. In some areas of Peru, the Quechua people continue the tradition of the Supay dance at Mamacha Candicha which roughly translates as "flame virgin" and is a festival with dancing lasting up to two weeks.