PaganSpace.net The Social Network for the Occult Community 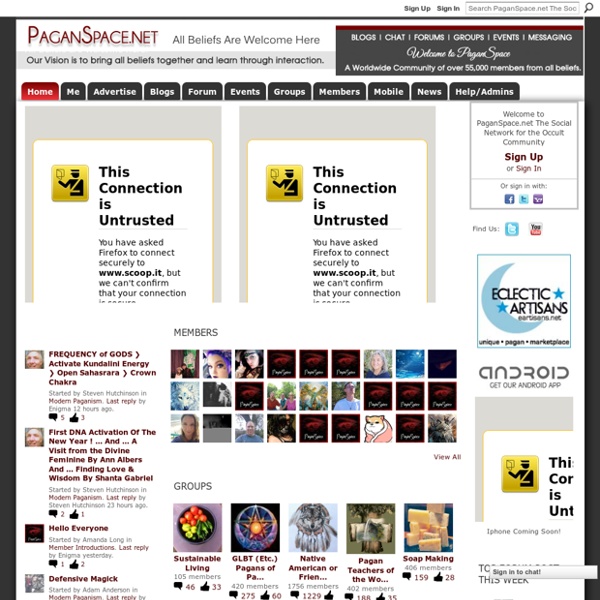 The new encyclopedia of the occult - John Michael Greer - Google Books The Golem: The Occult and Orientalism Golem-blogging, essay 7 of 21: The Occult and Orientalism Google The Golem (1920) and you’ll easily find comments criticizing the movie for being anti-Semitic. Most of this criticism is nonsense. The first ten minutes of The Golem establish the character of our Jewish heroes while explicitly addressing the wrong-headedness of Christian prejudice against the Jews. Using classic movie grammar (far shot to medium to closeup), The Golem opens by introducing the protagonist, Rabbi Loew, on his rooftop observatory. This opening assumes that viewers will: 1) accept that astrology and Kabbalistic Jewish mysticism are realities in this movie’s fantasy world and that only wise men are able to read the mystical signs, and 2) accept that the community represented by the Rabbi does not deserve “misfortune.” In swift movie shorthand, we’re introduced to the flirtatious semi-romance between Famulus (Rabbi Loew’s assistant) and the Rabbi’s daughter, Miriam. or sneak a peek at YouTube. © 2011 Lee Price

WitchVox This week the Witchvox staff would like to honor the work of Bronwen Forbes and thank her for her light, her wit and her incredible service to our communities. We claim this space and time to point you to her most popular Witchvox articles and other testimonials around the Pagan 'Net. I regret to announce that Bronwen (Rhomylly) Forbes, 48, passed away late Sunday night, April 10th, due to heart complications apparently brought on by the chemotherapy she was undergoing to treat her inflammatory breast cancer. She died in the arms of her husband, Alex, and our prayers and thoughts are with him and their daughter, Rose. A writer and craftswoman, she is the author of two books for Llewellyn: the amazing Make Merry In Step and Song: A Seasonal Treasury of Music, Mummer's Plays and Celebrations in the English Folk Tradition, and the forthcoming The Small-Town Pagan's Survival Guide: How to Thrive in Any Community, due out this June. Farewell, Rhomylly, and a fair wind for your journey.

Witchcraft | Witchcraft Spells | Love Spells | Money Spells | Cast Spells Be a Part of the Story John C. Lilly John Cunningham Lilly (January 6, 1915 – September 30, 2001) was a American physician, neuroscientist, psychoanalyst, psychonaut, philosopher, writer and inventor. He was a researcher of the nature of consciousness using mainly isolation tanks,[1] dolphin communication, and psychedelic drugs, sometimes in combination. Early life and education[edit] John Lilly was born to a wealthy family on January 6, 1915, in Saint Paul, Minnesota. His father was Richard Coyle Lilly, president of the First National Bank of St. Lilly showed an interest in science at an early age. While at St. Despite his father's wishes for him to go to an eastern Ivy-league college to become a banker, Lilly accepted a scholarship at the California Institute of Technology to study science. In 1934, Lilly read Aldous Huxley's Brave New World. Lilly became engaged to his first wife, Mary Crouch, at the beginning of his junior year at Caltech. At the University of Pennsylvania, Lilly met a professor named H. Research[edit]

Hoodoo Blog Wicca Spirituality Homepage The Emerald Tablets of Thoth the Atlantean Dr. Doreal, who has a connection with the Great White Lodge, which also works through the Pyramid Priest-hood, was instructed to recover and return to the Great Pyramid, these Ancient Tablets. This was accomplished, but before returning them, Doreal was given permission to translate and retain a copy of the wisdom engraved on the Tablets. This was done in 1925, and now, permission has been given for this translation by Doreal to be published solely through the Brotherhood of the White Temple. It is expected that many will scoff, yet the true student will read between the lines and gain wisdom. When Thoth, the Atlantean and Master raised the people of Khem (Egypt) to a great civilization, and when the time came for him to leave Egypt, he erected The Great Pyramid over the entrance of the Great Halls of Amenti. His writings consist of twelve Tablets of Emerald Green formed from a substance created through alchemical transmutation. Dr. Translation & Interpretation by Doreal