Herbs. Pantheon (gods) Godfinder. Pantheon. Khaos. The general public is usually familiar mostly with the so called Olympian gods and goddesses along with a few others, but the Greek pantheon includes also other lessed known deities. 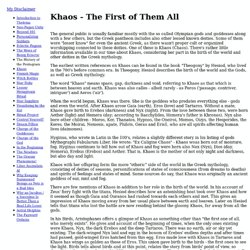 Some of them were "lesser know" for even the ancient Greek, as there wasn't proper cult or organized worshipping connected to these deities. One of these is Khaos (Chaos). There's rather little information available in our time about Khaos, considering her part in the birth of the world and other deities in the Greek mythology. The earliest written references on Khaos can be found in the book "Theogony" by Hesiod, who lived in the 700's before common era. Godchecker.com - Your Guide To The Gods. The Pagan Federation.

Male Spirit. The male mysteries have always had their place in the many expressions of the Pagan religion. 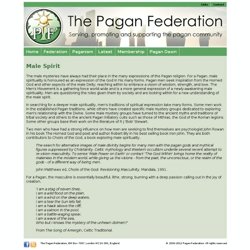 For a Pagan, male spirituality is honoured as an expression of the God in his many forms. Pagan men seek inspiration from the Horned God and other aspects of the male Deity; reaching within to embrace a vision of wisdom, strength, and love. The Men's Movement is a gathering force world-wide and is a more general expression of a newly-awakening male spirituality. Men are questioning the roles given them by society and are looking within for a new understanding of the male spirit. In searching for a deeper male spirituality, men's traditions of spiritual expression take many forms. Two men who have had a strong influence on how men are seeking to find themselves are psychologist John Rowan in his book The Horned God and poet and author Robert Bly in his best selling book Iron John. Between the Worlds A Spiritual Gathering for Men Who Love Men. 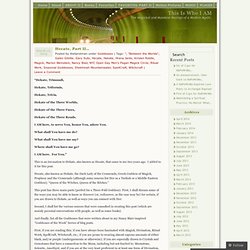 The Horned God by John Rowan. Iron John by Robert Bly. Axis Mundi. From the Editor... 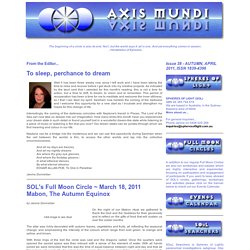 Well it has been three weeks now since I left work and I have been taking the time to relax and recover before I get stuck into my creative projects. The Wild Hunt. The Starwood Festival. Paganism. Paganism is a broad group of indigenous and historical polytheistic religious traditions—primarily those of cultures known to the classical world. 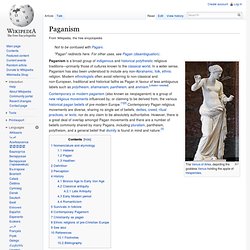 In a wider sense, Paganism has also been understood to include any non-Abrahamic, folk, ethnic religion. Modern ethnologists often avoid referring to non-classical and non-European, traditional and historical faiths as Pagan in favour of less ambiguous labels such as polytheism, shamanism, pantheism, and animism. [citation needed] Nomenclature and etymology[edit] Hellene[edit] In the Latin-speaking West of the newly Christianizing Roman Empire, Greek became associated with the traditional polytheistic beliefs of Ancient Greece and regarded as a foreign language (lingua peregrina).[4] By the latter half of the 4th century in the Greek-speaking East, Pagans were—paradoxically—most commonly called Hellenes (Ἕλλην, lit.

This was influenced by Christianity's early membership, who were Jewish. Pagan[edit] Heathen[edit] Definition[edit] Defining Paganism. The term “Pagan” comes originally from the Latin “paganus,” which appears to have originally had such meanings as “villager,” “country dweller,” or “hick.” 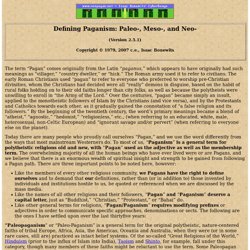 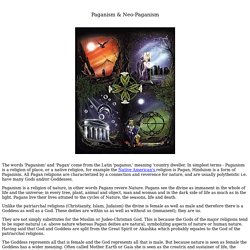 In simplest terms - Paganism is a religion of place, or a native religion, for example the Native American's religion is Pagan, Hinduism is a form of Paganism. All Pagan religions are characterized by a connection and reverence for nature, and are usually polytheistic i.e. have many Gods and/or Goddesses. Paganism is a religion of nature, in other words Pagans revere Nature. Pagan History. Or "Neo-Paganism" refers to those religions created since 1960 or so (though they had literary roots going back to the mid-1800's), that have attempted to blend what their founders perceived as the best aspects of different types of Paleopaganism with modern "Aquarian Age" ideals, while consciously striving to eliminate as much as possible of the traditional Western monotheism and dualism. 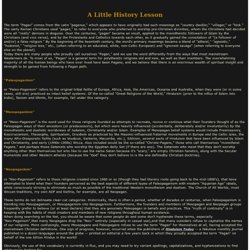 The Church of All Worlds, most Wiccan traditions, my own ADF and Keltria, for example, are all Neopagan. These terms do not delineate clear-cut categories. Historically, there is often a period, whether of decades or centuries, when Paleopaganism is blending into Mesopaganism, or Mesopaganism into Neopaganism. Furthermore, the founders and members of Mesopagan and Neopagan groups frequently prefer to believe (or at least declare) that they are genuinely Paleopagan in beliefs and practices. Copyright & copy; 1979,1997 c.e., Isaac Bonewits. List of Pagans. This is a list of historical individuals notable for their Pagan religion (as opposed to Abrahamic religions ), and modern individuals who self-describe as adherents of some form of Paganism or Neopaganism . 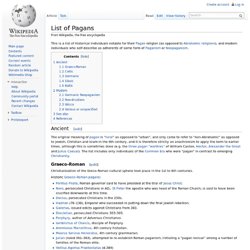 Ancient [ edit ] The original meaning of pagan is " rural " as opposed to "urban", and only came to refer to "non-Abrahamic" as opposed to Jewish, Christian and Islam in the 6th century, and it is therefore strictly an anachronism to apply the term to earlier times, although this is sometimes done (e.g. the three pagan "worthies" of William Caxton, Hector , Alexander the Great and Julius Caesar ). The list includes only individuals of the Common Era who were "pagan" in contrast to emerging Christianity . Graeco-Roman [ edit ] Christianization of the Greco-Roman cultural sphere took place in the 1st to 6th centuries. Historic Graeco-Roman pagans : Pontius Pilate , Roman governor said to have presided at the trial of Jesus Christ . Celtic [ edit ] What Is a Witch? True name. A true name is a name of a thing or being that expresses, or is somehow identical with, its true nature . 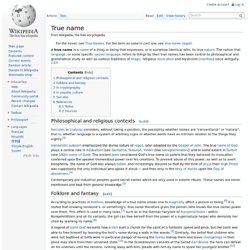 The notion that language , or some specific sacred language , refers to things by their true names has been central to philosophical and grammatical study as well as various traditions of magic , religious invocation and mysticism ( mantras ) since antiquity. [ 1 ] [ 2 ] Philosophical and religious contexts [ edit ] Atlas of True Names. Pagan Theology - An Enquiry into the nature of the Gods and Goddesses. Letter from Hardscrabble Creek. PaganSpace.net The Social Network for the Occult Community.

The Magical Buffet. May The author of “Effortless Mind”, Ajayan Borys, discusses how to work hard at meditation you have to take it easy. Linda Graham, psychotherapist, meditation instructor, and author of the new book “Bouncing Back: Rewiring Your Brain for Maximum Resilience and Well-Being”, talks a little bit about that resilience and some exercises to help the next time you need it. The world lost a very special woman recently. For me, she has the distinction of being my very first real life female hero. Want to Subscribe? To subscribe to the blog simply click on the subscribe tab above and enter your email address.

Related:  Mitologia   -  Pantheon   -  Godchecker.com - Your Guide To The Gods   -  Atlas of True Names   -  PaganSpace.net The Social Network for the Occult Community   -  Education   -  Enterprise