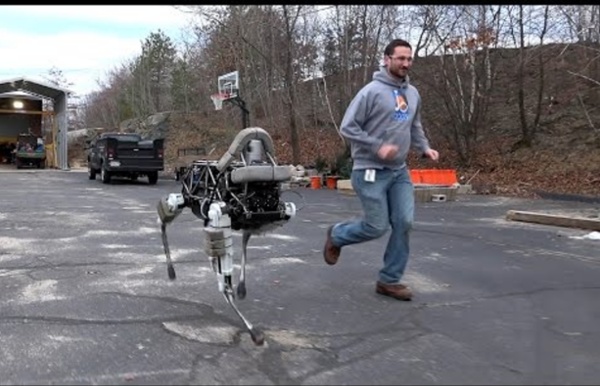 RoboBrain: Robots Begin to Develop ''Culture'' by Learning From Each Other By Nicholas West Machine learning continues to advance with new artificial intelligence systems that are beginning to acquire and share knowledge in very human ways. I had written last year about robots that were beginning to learn tasks from YouTube. Researchers from the University of Maryland were using the popular video network as a database of information to enhance artificial intelligence in much the same way that many of us will seek out instruction for attaining new skills. The abstract from their paper entitled: “Robot Learning Manipulation Action Plans by ‘Watching’ Unconstrained Videos from the World Wide Web” states: In order to advance action generation and creation in robots beyond simple learned schemas we need computational tools that allow us to automatically interpret and represent human actions.

Google patents customisable robot personalities Do you like your robots subservient and complimentary, or glib and a little bit cheeky? A patent that has just been awarded to Google suggests that either could be possible and that we could potentially download different personality types from the cloud. In fact, if you can't choose what kind of personality you want for your future robo-pal, it's highly possible that it might be able to choose for you. It would do this by accessing your devices and learning about you, before configuring a tailored personality based on that information. In addition it could use speech and facial recognition to personalise its interactions with you.

Google vs. Death In person, it can be a little hard to hear Larry Page. That’s because he has nerve damage in both vocal cords: one was paralyzed about 14 years ago, the other left with limited movement after a cold last summer. This rare condition doesn’t slow him down, though it has made his voice raspy and faint. You have to listen carefully. But it’s generally worth it. Robots will obliterate America's middle class and unleash mass unemployment, social chaos and global populist revolts (NaturalNews) In the next generation or so, highly capable robots will obliterate America's middle class by displacing tens of millions of workers. We're already seeing it take shape. Check out this robotic crop production facility that uses robots to produce 30,000 heads of fresh lettuce each day. This is precisely the kind of technology that makes humans obsolete. As robotic systems become more capable in the coming years, nearly all low-wage labor jobs will be taken over by affordable, reliable robotics systems. Even in a well educated society, employers grow weary of the behavioral traits of human workers (showing up stoned or drunk, stealing from the workplace, harassing other employees, etc.).

Falling in love with AI virtual assistants: a creepy love affair nearer than you think "I've never loved anyone the way I've loved you," swoons Joaquin Phoenix, in the movie Her. Being a Hollywood production, you might think he's chatting to a bikini-clad twentysomething, or maybe a quirky bookish type with big glasses and an even bigger heart. But it's neither. In fact, he isn't talking to anybody. He's in love with his computer's operating system, Samantha.

Google's project to 'cure death,' Calico, announces $1.5 billion research center The Google-backed life-extension company, Calico, announced today that it was partnering with Chicago-based pharmaceutical giant AbbVie to develop and bring to market new drugs targeting diseases associated with old age. Each partner has committed to providing $250 million in funding with the option to each add another $500 million to the project. The money will be used to create a new research center in San Francisco, where Calico will hire a team of researchers to discover new drugs and guide early development. The Artificial Intelligence Revolution: Part 1 PDF: We made a fancy PDF of this post for printing and offline viewing. Buy it here. (Or see a preview.) A Wikipedia for robots (Credit: TU/e) European scientists from six institutes and two universities have developed an online platform where robots can learn new skills from each other worldwide — a kind of “Wikipedia for robots.” The objective is to help develop robots better at helping elders with caring and household tasks. “The problem right now is that robots are often developed specifically for one task”, says René van de Molengraft, TU/e researcher and RoboEarth project leader.

WTF Is Calico, And Why Does Google Think Its Mysterious New Company Can Defy Aging? The sad truth is that, if everyone on the Forbes 400 list simultaneously (and tragically) got cancer, or Parkinsons (or any given disease for that matter), the world would probably be well on its way to finding a cure for these illnesses, thanks to the enormous wealth that would be incentivized to back those efforts. Finding a cure for an intractable disease requires time, enormous amounts of human and financial capital, cooperation and research — and at least a few public-private partnerships. It’s costly, and it’s messy. This is why Calico, Google’s newest mad science project, is potentially so exciting. In fact, Calico could represent the company’s largest health-care initiative since Google Health sprinted its way into obscurity. Of course, Google is a different company today than it was in 2008 (when it launched Google Health) and so are we.

BioAPI physical evidence from chemtrails This web sites not bother with the scientific details or patents behind the actual nano-tech. I, like yourself I'm sure are not a nano-tech engineer. If you want details you can read for the next ten years if you want. Patents are easily found for all of this. The Personality Forge AI - About Artificial Intelligence Chat Bots Welcome to the Personality Forge, an advanced artificial intelligence chat bot platform and living community of chat bots and people. Here people create and work on AI Personalities called chat bots who, once created, have an independent existence, chatting with both real people and other chat bots. While you're away, they're having conversations, making friends, and making memories that you can look in on. The Personality Forge's AI Engine integrates memories, emotions, knowledge of hundreds of thousands of words, sentence structure, unmatched pattern-matching capabilities, and a scripting language called AIScript. It's the heart and mind of all the bots here, and it's easy enough to work with that you need no programming experience to get started. Read more about the AI Engine's features.

Google Calico Aging Research Company In 2013 Google started a new aging research company called Calico Labs. This is part of Google’s “moonshot” initiative, which also includes other cutting-edge efforts like the driverless car. Google has a corporate strategy to include such bold efforts outside their core industry as parts of their overall R & D activity. “Calico is a research and development company whose mission is to harness advanced technologies to increase our understanding of the biology that controls lifespan. We will use that knowledge to devise interventions that enable people to lead longer and healthier lives. Executing on this mission will require an unprecedented level of interdisciplinary effort and a long-term focus for which funding is already in place.”

Introduction To Nanotechnology Nanotechnology, also referred to as nanotech, is the science and technology of building devices, such as electronic circuits, and controlling molecular structures that are less than 100 nanometers in size. One nanometer is equal to one billionth of a meter. Nanotechnology is literally invisible to the naked eye.