When will computer hardware match the human brain? by Hans Moravec 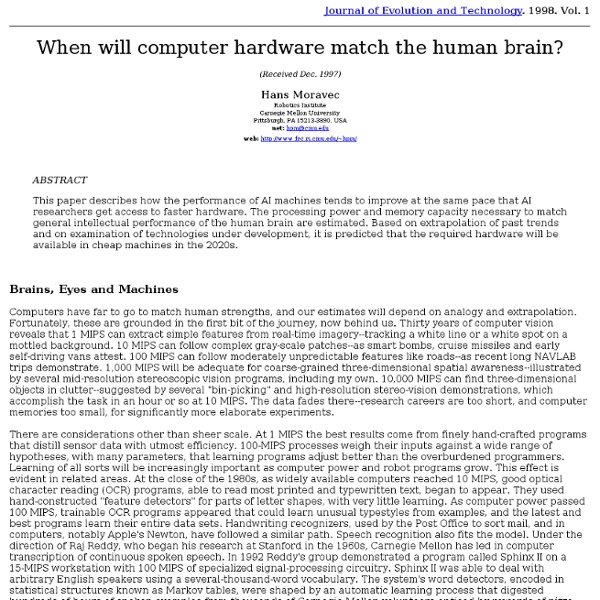 Journal of Evolution and Technology. 1998. Vol. 1 When will computer hardware match the human brain? (Received Dec. 1997) Hans Moravec ABSTRACT This paper describes how the performance of AI machines tends to improve at the same pace that AI researchers get access to faster hardware. Brains, Eyes and Machines Computers have far to go to match human strengths, and our estimates will depend on analogy and extrapolation. There are considerations other than sheer scale. More computer power is needed to reach human performance, but how much? The retina is a transparent, paper-thin layer of nerve tissue at the back of the eyeball on which the eye's lens projects an image of the world. It takes robot vision programs about 100 computer instructions to derive single edge or motion detections from comparable video images. 100 million instructions are needed to do a million detections, and 1,000 MIPS to repeat them ten times per second to match the retina. MIPS and Megabytes. to mimic their behavior.

The Easiest, Most Horrifying Way to Create Artificial Wombs abortion. ultimately, i feel like this is how the issue of abortion will be resolved. first, a couple of ground rule, undeniable facts: 1. we do not know when human life worthy of protection - i.e. 2. it is IMPOSSIBLE to know with certainty when "personhood" begins. it will forever be the fodder for philosophical musings and never one of absolute certainty. ultimately, as it manifests in government and societies, it is a matter of pragmatism and the freedom of one party who is undeniably a person with rights - women. as with all rational people, i am pro choice. i do not believe that the 8 cells of a blastocyst are a "person" with a life worth protecting. but at the same time, what of a fetus that 8.5 months old still within the womb of its mother and yet to be born but could easily survive even without an incubator. just as i would instantly dismiss the blastocyst as human in any significant way, i would say an 8.5 month fetus is a human child. not even a iota of doubt. so: where's the line? or

3 Ideas That Are Pushing the Edge of Science | Gadgets 1 Sperm-powered Nanobots The next wave in health care may include a brigade of medical nanobots, devices tiny enough to ride the flow of blood through the body's arteries to a problem area. The bots might arrive at a clot, for example, and then using an internal power system, obliterate the clot with a precisely targeted drug or therapy. Designing a power source to accomplish such a task has been a challenge, but from the College of Veterinary Medicine at Cornell University comes a possible answer. The same molecular power packs that fuel sperm in their journey through the uterus and to a fallopian tube might be copied and used to keep the nanomachines running once they reach their targets. Led by reproductive biologist Alex Travis, the engineering effort focuses on a chain of enzymes that metabolize glucose molecules into the biological fuel ATP (a process known as glycolysis), which enables sperm locomotion. Does this mean we could actually experience a second dimension of time?

It Is Almost Impossible To Create Fake Meat m.guardian.co.uk As mission statements go, it takes some beating. Scrawled on a whiteboard are the words: "We will change how the Earth looks from space!" It surpasses "Don't be evil" (the motto of Google, just down the road), and in terms of hubris it trumps even that of Facebook (also just round the corner): "Move fast and break things!" In this anonymous laboratory on a low-rise industrial estate in Menlo Park, 40km south of San Francisco, there is a whiff of revolution in the air. Professor Patrick Brown could easily be taken for a deranged visionary. The fake meat business has been around for decades, of course, but it has never really taken off. But the meat-fakers say they are on the verge of a breakthrough, that there is a real possibility that a new era of fake meat – nutritious, cheap and indistinguishable from the real thing, made either of synthesised animal tissue or derived from plant material – may be upon us. Eating meat is bad for the environment, of that there is no doubt. "Sure."

You Can't Run From the Cop Car of the Future 10 of the Weirdest Futurist Scenarios for the Evolution of Humanity Curious to know which of these visions you feel is the most and least plausible. I've got to hand it to you, Mr. Dvorsky. First off, I would say that the future will hold some combination of "all of the above", with no one particular hypothesis prevailing in the next few hundred years as each hypothesized outcome exploits a unique ecological niche. That said, brain size is DEFINITELY correlated with intelligence. The reason Americans' heads are getting bigger may be due to the high rate of C-sections in the US. I actually agree with you about speciation. 1. 2. 3. 4. 5. 6. 7. 8. 9. 10. Wow, surprised to see so many people in support of the uploading scenario. Did Rob Schneider give you permission to use his face on that top photo?? Heh, that actually occurred to me, too. Hm...None of the above. This article has given me a lot of inspiration for the novel I'm working on. Glad to hear it!

What San Francisco Would Look Like After Climate Change The 55 States of America: 5 places that could become U.S. States in your lifetime Before we run off and admit the UK and Cuba, what about Canada and Mexico? They obviously already share geographic borders with the US; Canada shares culture with Minnesota, Oregon, Washington, Wisconsin, Michigan, New York, and politics with a number of other states. Mexico has a shared cultural history with the American Southwest (much of it having previously been Mexico). Moreover, New York, Chicago, and Los Angeles have grown to the size that their metropolitan areas would make them among the larger states, population and representation wise, in the country. As someone else mentioned, Japan makes as much if not more sense than the UK. South America would probably unify in some fashion; perhaps a Confederacy. On the UK, I think it's more likely that the Euro collapses and the UK, Germany, and France create a new European Union, eventually adding Spain, Portugal, Italy, the Scandanavian countries, and Eastern Europe.

Sorry ‘Prometheus’ fans: No interstellar travel for five more centuries When do we get one? (AP) Possibly not. A fascinating recent research paper by Marc G. Millis, a former NASA expert on breakthrough propulsion, suggests that we probably won’t be ready to travel to other stars for at least another two to five centuries. How does he figure? Because, he argues, even if we do invent faster, niftier spaceships, there may not be enough energy available to reach other stars anytime soon. Here’s Millis’s reasoning: Imagine we merely wanted to launch a small, 11-ton probe that took 75 years to get to our closest star, Alpha Centauri. And humans don’t exactly have that energy just lying around. The good news, Millis notes, is that we could probably have a small colony ship that contained a bunch of humans ready even sooner, by the year 2200 or so. Below is a graph showing how soon different future spaceships might arrive depending on how fast the world’s energy supply grows. Millis, who’s now at the Tau Zero Foundation, also raises an interesting paradox.

The Future of Graveyards I am a taphophile, and have been one since birth. It saddens me to think that cemeteries might no longer be the places that I've come to love and the wonderful places in which I enjoy spending my time. I spent many, many hours as a teenager and in my 20's, peacefully roaming around the cemeteries of New England; often I would just find a comfortable spot and read. There's something about the tangibleness of the old tombstones and crypts that speaks to me, and that I find very personally important; I touch them and for a moment I'm connected to those people, wondering what they might have been like, wondering what their lives, their families, their deaths were like. That connection I feel to history is part and parcel of my personal makeup. And the epitaphs! And occasionally you'll find mysteries, there, too. Fortunately for me, I come from old New England stock and we have our own family burial plot out in the woods in northern New Hampshire.

Imagining the Super-Enhanced Athlete of the Future Apprehending the Future: Emerging Technologies, from Science Fiction to Campus Reality (EDUCAUSE Review ©2009 Bryan Alexander. The text of this article is licensed under the Creative Commons Attribution 3.0 License ( ). EDUCAUSE Review, vol. 44, no. 3 (May/June 2009): 12–29 Bryan Alexander Bryan Alexander ( Bryan.Alexander@nitle.org ) is Director of Research at the National Institute for Technology and Liberal Education (NITLE). Comments on this article can be posted to the web via the link at the bottom of this page. How can those of us in higher education best understand new technologies? Deciding which technologies to support for teaching and learning—and how to support them—depends, first, on our ability to learn about each emerging development. But trying to grapple with what comes next is a deep problem. Keeping an Eye on What's Next: The Environmental Scan One popular method for seeing what's coming over the horizon is to repeatedly survey that horizon, looking for the leading edges of new projects and trends. Role-Playing Futures: Scenarios

The Wrong Way to Plan for the Future Interesting stuff. I still like this guy's take on it: [www.youtube.com] starting at around 36:00. He points out that we've actually known about this idea for a very long time: There's a line in the Sermon on the Mount. "Take therefore no thought for the morrow; for the morrow shall take thought for the things of itself. Sufficient unto the day is the evil thereof." —Matthew 6:34 It's a very strange piece of advice. ...And the idea behind this particular piece of advice is...you ask yourself—and this is meditative—what is it that I need to do today so that this would be a good day? of commitments, today, and if you do them, you've fulfilled your obligations." ...And the idea behind this piece of advice is that if you fulfill your obligations every day then you won't have to worry about the future. ...And so, you see this idea in Taoism, too. I'm not talking about following a moral code, although that can come into it if you really don't know what the hell you're doing at all.