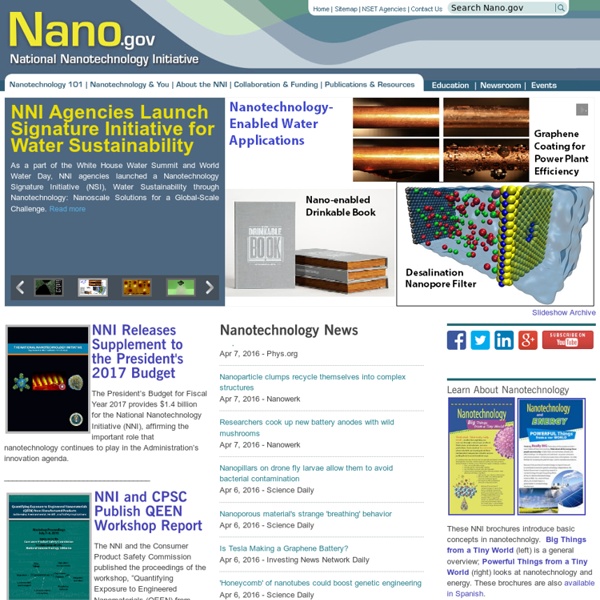 Nanoscribe Will Sell a Micro 3-D Printer That Creates Tiny Structures in Seconds Nanoscribe, a spin-off from the Karlsruhe Institute of Technology in Germany, has developed a tabletop 3-D microprinter that can create complicated microstructures 100 times faster than is possible today. “If something took one hour to make, it now takes less than one minute,” says Michael Thiel, chief scientific officer at Nanoscribe. While 3-D printing of toys, iPhone covers, and jewelry continues to grab headlines (see “The Difference Between Makers and Manufacturers”), much of 3-D printing’s impact could be at a much smaller scale. Micrometer-scale printing has shown promise for making medical and electronic devices. Thiel says it should be possible to speed up his company’s microprinting technique even more in the future.

Productive Nanosystems as a Milestone Toward Geoethical Nanotechnology, James B. Lewis, Ph.D. James B. Lewis, Ph.D. This article was submitted to the Journal on Geoethical Nanotechnology by Nanotechnology Consultant and Science Writer, James B. World's smallest, fastest nanomotor can fit inside a single cell Researchers at the Cockrell School of Engineering at The University of Texas at Austin have built the smallest, fastest and longest-running tiny synthetic motor to date. The team's nanomotor is an important step toward developing miniature machines that could one day move through the body to administer insulin for diabetics when needed, or target and treat cancer cells without harming good cells. With the goal of powering these yet-to-be invented devices, UT Austin engineers focused on building a reliable, ultra-high-speed nanomotor that can convert electrical energy into mechanical motion on a scale 500 times smaller than a grain of salt. Mechanical engineering assistant professor Donglei "Emma" Fan led a team of researchers in the successful design, assembly and testing of a high-performing nanomotor in a nonbiological setting. The team's three-part nanomotor can rapidly mix and pump biochemicals and move through liquids, which is important for future applications.

Research In Review: Paper Promise Paper Promise Peering through the lab window to a limitless world of uses in industry is an amazing new material that some day could be as commonplace as plastic. By Don Wood When Sumio Iijima of NEC Laboratories in Japan discovered carbon nanotubes in 1991, he set off a worldwide gold rush in academic, government and industrial labs to find practical uses for these extraordinary molecules.

Nanotechnology and Nanomedicine Medical Devices and Applications Nanotechnology involves the science and technology of devices and materials, such as drug delivery systems or electronic circuits, that are created on extremely tiny scales – as small as molecules and even atoms. Nanotechnology also involves manipulation of structure matter at molecular levels, involving different fields and specialties such as chemistry, engineering, electronics, medicine and others. All of these fields of study and pursuit are concerned with bringing existing technologies down to a very tiny scale that is measured in, 'nanometers,' which is a billionth of a meter, or about the size of six carbon atoms in a row. The processes used both today and in the past in the creation of industrial products have involved pushing piles of millions of atoms together through mixing, grinding and heating, a process that is very imprecise. Scientists are now able to pick up individual atoms and assemble them into structures, or cause particular chemical reactions.

Nano-Robots That Compute With DNA Installed Into Living Cockroach Scientists have inserted DNA-based nanobots into a living cockroach, which are able to perform logical operations. Researchers say the nanobots could eventually be able to carry out complex programs, to diagnose and treat disease. These DNA machines (or origami robots, so-called since they can unfold and deliver drugs stored within) carry fluorescent markers, allowing researchers to tell where in the roach's body they are traveling and what they are doing. Incredibly, the "accuracy of delivery and control of the nanobots is equivalent to a computer system," New Scientist reported.

researcher's "buckypaper" is stronger than steel at a fraction of the weight by Barry Ray Working with a material 10 times lighter than steel—but 250 times stronger—would be a dream come true for any engineer. If this material also had amazing properties that made it highly conductive of heat and electricity, it would start to sound like something out of a science fiction novel. Yet one Florida State University research group, the Florida Advanced Center for Composite Technologies (FAC2T), is working to develop real-world applications for just such a material. Learn About Nanotechnology in Cancer Nanotechnology—science and engineering of manipulating matter at the molecular scale to create devices with novel chemical, physical and biological properties—has the potential to radically change how we diagnose and treat cancer. Although we have only recently developed the ability to manipulate technologies on this scale, there has been great progress in moving nano-based cancer therapies into the clinic and many more are in development. To gain a better understanding of nanotechnology, we invite you to begin your exploration of this emerging field by learning about the science behind it. If you want to know more about the current applications of nanotechnology in cancer research and its promise for cancer diagnosis and treatment, the NCI Alliance for Nanotechnology in Cancer provides up-to-date information on what is available now and what is on the horizon. Nanotechnology relies on the intersection of expertise from many science and engineering disciplines. Impacts on Cancer

Nanomotors are controlled, for the first time, inside living cells UNIVERSITY PARK, Pa. -- For the first time anywhere, a team of chemists and engineers at Penn State has placed tiny synthetic motors inside live human cells, propelled them with ultrasonic waves and steered them magnetically. It's not exactly "Fantastic Voyage," but it's close. The nanomotors, which are rocket-shaped metal particles, move around inside the cells, spinning and battering against the cell membrane. "As these nanomotors move around and bump into structures inside the cells, the live cells show internal mechanical responses that no one has seen before," said Tom Mallouk, Evan Pugh Professor of Materials Chemistry and Physics. "This research is a vivid demonstration that it may be possible to use synthetic nanomotors to study cell biology in new ways. We might be able to use nanomotors to treat cancer and other diseases by mechanically manipulating cells from the inside.

Breakthrough Research Leads to the 3D Printing of Pure Graphene Nanostructures Founded by Russian entrepreneur Dmitry Itskov in February 2011 with the participation of leading Russian specialists in the field of neural interfaces, robotics, artificial organs and systems. The main goals of the 2045 Initiative: the creation and realization of a new strategy for the development of humanity which meets global civilization challenges; the creation of optimale conditions promoting the spiritual enlightenment of humanity; and the realization of a new futuristic reality based on 5 principles: high spirituality, high culture, high ethics, high science and high technologies. The main science mega-project of the 2045 Initiative aims to create technologies enabling the transfer of a individual’s personality to a more advanced non-biological carrier, and extending life, including to the point of immortality.

Nanotechnology Today: Nanotechnology Podcast Nanotechnology - A Review with an Australian PerspectiveTotal running time 32:18 mins, File size: 7.75Mb, File Type: mp3, BuckyBalls MPEG Movie 0:11 chemical vapor deposition is intercalated with copper to create a composite which exhibits good thermal properties ideal for chip cooling. Photo: NASA Ames Center for Nanotechnology SYDNEY - 28th Sept 2006 - Marking a major milestone in the delivery of Nanotechnology related information; AZoNetwork and Nanotechnology Victoria (NanoVic) today announced the official release of the first in a series of Nanotechnology Reviews in a Podcast format. This initial Podcast provides a short history of the development of Nanotechnology and interviews several key players from within the Nanotech industry, research community and government to draw out their current views on the likely impact Nanotechnology will have on healthcare, materials and the environment.

DNA nanobots will soon be tried in a critically ill leukemia patient - Futurism Synopsis The patient, will receive an injection of DNA nanobots designed to interact with and destroy leukemia cells-while causing virtually zero collateral damage in healthy tissue. Summary