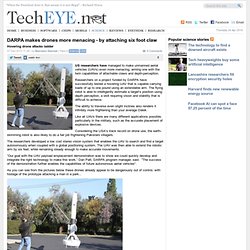 Researchers on a project funded by DARPA have successfully tested a hovering UAV that is capable carrying loads of up to one pound using an extendable arm. The flying robot is able to intelligently estimate a target's position using depth perception, a skill requiring vision and stability that is difficult to achieve. The ability to traverse even slight inclines also renders it infintely more frightening than your average Dalek. Like all UAVs there are many different applications possible, particularly in the military, such as the accurate placement of explosive devices. Considering the USA's track record on drone use, the earth-skimming robot is also likely to do a fair job frightening Pakistani villagers. And another advancing on a ladder in a field, somewhere. DisplayNews. GENEVA (30 May 2013) – The United Nations Special Rapporteur on extrajudicial, summary or arbitrary executions, Christof Heyns, today called for a global pause in the development and deployment of lethal autonomous robots (LARs), to allow “serious and meaningful international engagement on this issue before we proceed to a world where machines are given the power to kill humans.” 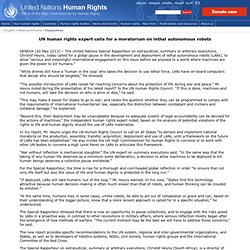 “While drones still have a ‘human in the loop’ who takes the decision to use lethal force, LARs have on-board computers that decide who should be targeted,” he stressed. “The possible introduction of LARs raises far-reaching concerns about the protection of life during war and peace,” Mr. Heyns noted during the presentation of his latest report* to the UN Human Rights Council. “If this is done, machines and not humans, will take the decision on who is alive or dies,” he said. In his report, Mr. “War without reflection is mechanical slaughter,” the UN expert on summary executions said. UN report says killer bots could fight WAR WITHOUT END. The United Nations has called for the establishment of an international body to set guidelines for the development and use of lethal autonomous robotics (LARs), lest such machines go on a never-ending killing spree that plunges humanity into perpetual war. 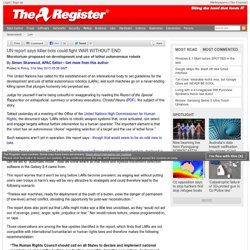 Judge for yourself if we're being colourful or exaggerating by reading the Report of the Special Rapporteur on extrajudicial, summary or arbitrary executions, Christof Heyns ( PDF ), the subject of this story. Tabled yesterday at a meeting of the Office of the United Nations High Commissioner for Human Rights , the document says “LARs refers to robotic weapon systems that, once activated, can select and engage targets without further intervention by a human operator.

The important element is that the robot has an autonomous 'choice' regarding selection of a target and the use of lethal force.” Such weapons aren't yet in operation, the report says - though that would seem to be an odd view to take . One Visible Future — You note the development of a new kind of robotic... South Korea to field gun-cam robots on DMZ.

Technological colossus South Korea is pressing ahead with efforts to join Israel and America in the white-hot field of killer robots. 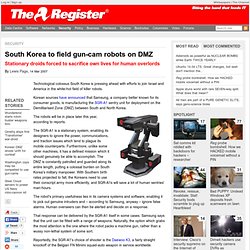 Korean sources have announced that Samsung, a company better known for its consumer goods, is manufacturing the SGR-A1 sentry unit for deployment on the Demilitarised Zone (DMZ) between South and North Korea. The robots will be in place later this year, according to reports. The SGR-A1 is a stationary system, enabling its designers to ignore the power, communications, and traction issues which tend to plague its mobile counterparts. Furthermore, unlike some other machines, it has a defined mission which it should genuinely be able to accomplish. The DMZ is constantly patrolled and guarded along its entire length, putting a colossal burden on South Korea's military manpower.

The robot's primary usefulness lies in its camera systems and software, enabling it to pick out genuine intruders and – according to Samsung, anyway – ignore false alarms. South Korea Intelligent Surveillance and Guard Robot. Robot sentinella. Samsung SGR-A1. The Samsung SGR-A1 is a South Korean military robot sentry designed to replace human counterparts in the demilitarized zone at the South and North Korea border.[1][2] It is a stationary system made by Samsung defense subsidiary Samsung Techwin. 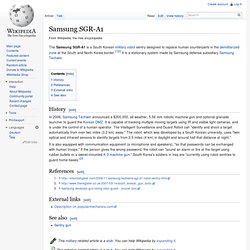 History[edit] In 2006, Samsung Techwin announced a $200,000, all weather, 5.56 mm robotic machine gun and optional grenade launcher to guard the Korean DMZ. It is capable of tracking multiple moving targets using IR and visible light cameras, and is under the control of a human operator. The Intelligent Surveillance and Guard Robot can "identify and shoot a target automatically from over two miles (3.2 km) away. " The robot, which was developed by a South Korean university, uses "twin optical and infrared sensors to identify targets from 2.5 miles (4 km) in daylight and around half that distance at night. " It is also equipped with communication equipment (a microphone and speakers), "so that passwords can be exchanged with human troops. " Sentry gun.