For Human Bodies 2022. Mind Control? Scientists Have Discovered How To Use Nanoparticles To Remotely Control Behavior! We are moving into a time when the extraordinary advances that have been made in the fields of nanotechnology, neurology, psychology, computer science, telecommunications and artificial intelligence will be used by governmental authorities to control the population? 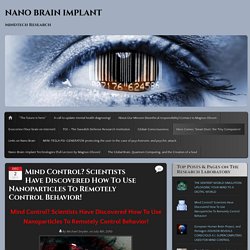 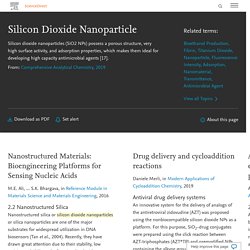 Some properties make the silicon based nanoparticles as excellent materials for various targets including biocompatibility, ease of surface modifications, low toxicity, versatile and large-scale synthetic availability. Inherent characteristic of the resonance light scattering (RLS) could be used to develop simple methods. Researchers: Microbots Will Soon Enter Human Colons to Deliver Medical Payloads. Humans have long to reverse the effects of aging and prolong their lives. 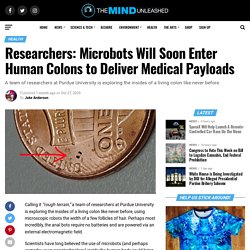 Whether this was due to a love of power, a love of wealth or simple human anxiety about the loss of youth, tales about immortality can be found in the folk tales of countless cultures. And while aging is a wholly natural process, humans have always struggled to fight against it – be it through science and medicine or through the search for supposed cures such as the mythical Fountain of Youth. And now, Israeli scientists have claimed to have figured out a solution not only to the process of biological aging – but to reverse it as well, simply by administering pure oxygen in a pressurized chamber.

In a study published Nov. 18 in the peer-reviewed journal Aging, the scientists claim to have showed how aging could be reversed in two key biological clocks in humans related to aging and illness by administering high-pressure oxygen in a pressurized chamber. Liquid metal that floats on water could make transformable robots. (4) This is the First LIVING Robot and it's Unbelievable. A.I. Is Making it Easier to Kill (You). Here’s How. Synthetic telepathy. Synthetic telepathy“Artificial Telepathy” is the art of electronically transfering thought directly to and from a brain. 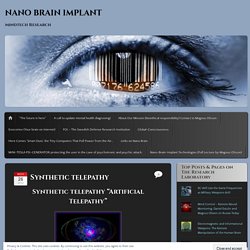 The primary objectives of www.nanobrainimplant.com are to expose technology that can provide point to point communication from one brain to another, to localize unwanted sources of telepathic communication, and to provide evidence that technologically implemented telepathy is possible. Technology to block unwanted voices is being investigated. A key objective is to prove the existence of criminals who abuse existing synthetic telepathy technology. Further objectives include investigating other computational substrates than brain tissue. www.nanobrainimplant.com is also interested in marketing existing synthetic telepathy technology.

For justice and medical purposes only. Nanoparticles Destroy Soil and The Environment - Study Finds. By Ethan A. 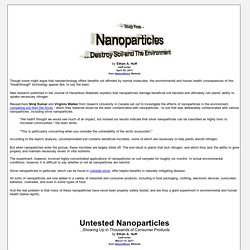 Huff staff writer April 20, 2011 from NaturalNews Website Though some might argue that nanotechnology offers benefits not afforded by normal molecules, the environmental and human health consequences of this "breakthrough" technology appear dire, to say the least. New research published in the Journal of Hazardous Materials explains that nanoparticles damage beneficial soil bacteria and ultimately ruin plants' ability to uptake necessary nitrogen. I Made Myself Fireproof AND Waterproof With Aerogel. Properties and Applications of Silica Nanoparticles. Silicon dioxide nanoparticles, also known as silica nanoparticles, are promising for biological applications owing to their excellent biocompatibility, low toxicity, thermal stability, facile synthetic route, and large-scale synthetic availability. 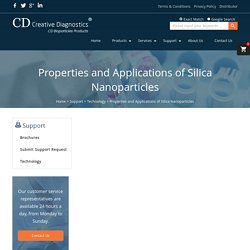 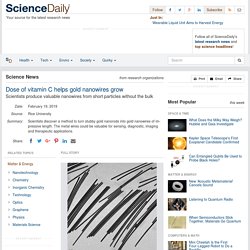 Recovery of Drug Delivery Nanoparticles from Human Plasma Using an Electrokinetic Platform Technology - Ibsen - 2015 - Small. The effect of complex biological fluids on the surface and structure of nanoparticles is a rapidly expanding field of study. 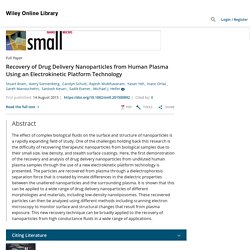 One of the challenges holding back this research is the difficulty of recovering therapeutic nanoparticles from biological samples due to their small size, low density, and stealth surface coatings. Here, the first demonstration of the recovery and analysis of drug delivery nanoparticles from undiluted human plasma samples through the use of a new electrokinetic platform technology is presented. The particles are recovered from plasma through a dielectrophoresis separation force that is created by innate differences in the dielectric properties between the unaltered nanoparticles and the surrounding plasma.

It is shown that this can be applied to a wide range of drug delivery nanoparticles of different morphologies and materials, including low‐density nanoliposomes. SSB's Probe Magazine — Probe Magazine. Advancement of the Emerging Field of RNA Nanotechnology - ACS Nano. Liquid glass nanotechnology, what's it? Liquid Glass Products for protection. UC Berkeley professor’s ‘slaughterbots’ video on killer drones goes viral. A UC Berkeley computer science professor helped to create a video that imagined a world where nuclear weapons were replaced by swarms of autonomous tiny drones that could kill half a city and are virtually unstoppable. 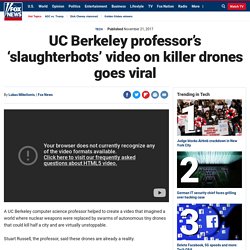 Stuart Russell, the professor, said these drones are already a reality. The video takes the viewer to an auditorium where a speaker showcases a drone roughly the size of a mockingbird. At one point the drone lands on his hand, the speaker quickly recalibrates it and then throws it out into the audience again. NanoCam™ - An Ultra-Miniature Multi Lens Array 3D Camera. Nanomarkassimilation. Directory of info in regarding Assimilation and Mutation by NanoGentic Engineering Nano Aerosols These have been with us since the industrial revolution and since the early 50's these particulates were called ultrafine particles that were released into the environment~ and over the years through increased releasing of chemicals these particulate matter have interacted in the atmosphere producing chemistry that is not even listed in the periodic table.

Could 'Nanowood' Replace Styrofoam? Expanded polystyrene (or “Styrofoam”) is an excellent insulator. 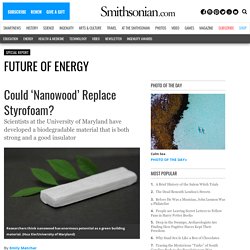 That’s why it’s a popular material for insulating buildings—and why those cheap little cups of deli coffee still burn your tongue after 30 minutes. But its environmental record leaves something to be desired. Nanowire 'Inks' Enable Paper-Based Printable Electronics. Printed electronics, which are already being used on a wide scale in devices such as the anti-theft radio frequency identification (RFID) tags you might find on the back of new DVDs, currently have one major drawback: for the circuits to work, they first have to be heated to melt all the nanoparticles together into a single conductive wire, making it impossible to print circuits on inexpensive plastics or paper. A new study by Duke researchers shows that tweaking the shape of the nanoparticles in the ink might just eliminate the need for heat. By comparing the conductivity of films made from different shapes of silver nanostructures, the researchers found that electrons zip through films made of silver nanowires much easier than films made from other shapes, like nanospheres or microflakes.

In fact, electrons flowed so easily through the nanowire films that they could function in printed circuits without the need to melt them all together. Research paper: Nano Supermarket - What Is Nano? Application of Nanotechnology to Food Products - Nanotechnology in Food Products - NCBI Bookshelf. Ingestible origami robot. In experiments involving a simulation of the human esophagus and stomach, researchers at MIT, the University of Sheffield, and the Tokyo Institute of Technology have demonstrated a tiny origami robot that can unfold itself from a swallowed capsule and, steered by external magnetic fields, crawl across the stomach wall to remove a swallowed button battery or patch a wound. The new work, which the researchers are presenting this week at the International Conference on Robotics and Automation, builds on a long sequence of papers on origami robots from the research group of Daniela Rus, the Andrew and Erna Viterbi Professor in MIT’s Department of Electrical Engineering and Computer Science.

Future Robots May be Considered "Electronic Persons" It Begins: Bots Are Learning to Chat in Their Own Language. Introduction To Nanotechnology. BioAPI physical evidence from chemtrails. Nanotechnology Archives. The Artificial Intelligence Revolution: Part 1. Robots will obliterate America's middle class and unleash mass unemployment, social chaos and global populist revolts. RoboBrain: Robots Begin to Develop ''Culture'' by Learning From Each Other. Cyborgs – scientists create biological tissue with embedded wiring. New Science of the Organism - Nanotechnology. Nanoscale Autonomous Walking Machine Built from DNA - ''Could Roam the Human Body'' Nanoparticle Bubbles Deliver Drug Treatment When Activated by Laser. ''Psychic'' Robot Will Know What You Really Meant To Do.

Humans Need Not Apply. Cyborg Moth "Biobots" Preparing For Flight. The Era Of Cyborg Nanotechnology Has Begun. Future World - Smart Dust Micro Computers. ‘Killer robots’: They’re Here. The Robots Are Coming, And They Are Replacing Warehouse Workers And Fast Food Employees. All In The (Robotic) Family: New Robots Aim to "Manipulate Your Emotions" Terminator Robots Becoming a Threat say U.S. Military and United Nations. Scientists warn the rise of AI will lead to extinction of humankind. Company develops real-life RoboCop. The Rise of the Avatars and Their Effect on Reality. Scientists Invent Particles That Will Let You Live Without Breathing. Power of Nanotechnology Video Blow Your Mind. Mad Science: “We’re now able to eavesdrop on the brain in real life”

27 Science Fictions That Became Science Facts in 2012. Scientists invent self-healing 'terminator' polymer that could revolutionize electronics, body armor. Nano Radio Transmitters-June 3, 2010. Nanobiometrics Will Track You By Smell. Count down to zerotime.com » Mark of the beast tech exposed remote control living organisms become a reality and chips which can read your mind. Google to Introduce Smart Contact Lenses: The Era Of Cyborgs Has Begun. Rolls-Royce is developing drone cargo ships....Drones On The Sea.