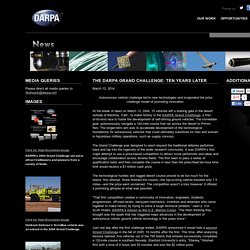 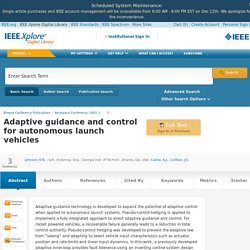 Pseudo-control hedging is applied to implement a fully integrated approach to direct adaptive guidance and control. For rocket powered vehicles, a recoverable failure generally leads to a reduction in total control authority. Pseudo-control hedging was developed to prevent the adaptive law from “seeing” and adapting to select vehicle input characteristics such as actuator position and rate limits and linear input dynamics. In this work, a previously developed adaptive inner-loop provides fault tolerance using an inverting control system design augmented with a neural net.

Clemson Vehicular Electronics Laboratory: Autonomous Vehicles. A vehicle that can drive itself by sensing its environment is called an Autonomous vehicle or Driverless vehicle. 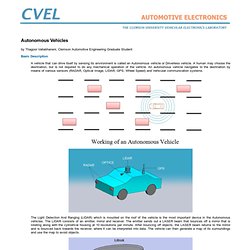 A human may choose the destination, but is not required to do any mechanical operation of the vehicle. An autonomous vehicle navigates to the destination by means of various sensors (RADAR, Optical Image, LIDAR, GPS, Wheel Speed) and Vehicular communication systems. Master of Engineering in Robotics and Autonomous Vehicles. The ISD office will help you prepare your Plan of Study. 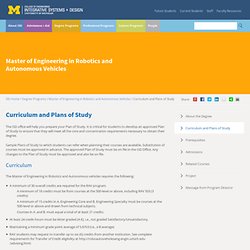 It is critical for students to develop an approved Plan of Study to ensure that they will meet all the core and concentration requirements necessary to obtain their degree. Sample Plans of Study to which students can refer when planning their courses are available. Substitution of courses must be approved in advance. Autos - Hands off with Heathrow's autonomous pod cars. Tucked in a corner of Terminal 5 at London’s Heathrow airport, the future of urban mobility is quietly unfolding. 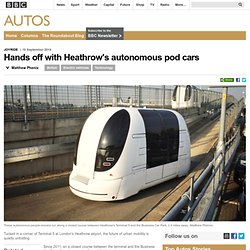 Since 2011, on a closed course between the terminal and the Business Car Park, 2.4 miles away, a fleet of 21 diminutive passenger pods have ferried as many as 1,000 passengers each day, quietly logging well more than 1m autonomous miles in the process. It’s a small-scale experiment, commissioned by Heathrow Airport Holdings Limited and built by UK-based Ultra Global PRT (for Personal Rapid Transit), but its success – measured by cost savings, environmental impact and user-friendliness – may help define locomotion in the city of tomorrow.

This is no miniature railway; Ultra pods are real cars, with rubber tires and untethered, battery-driven powertrains. Although they offer space for as many as six people and their luggage, they are compact, measuring 12ft long, 5ft wide and 6ft tall; and lightweight, tipping the scales at just 1,870lbs, including a 141lb battery pack. Technology Takes the Wheel. Continue reading the main story Video DETROIT — Google’s driverless car may still be a work in progress, but the potential for semiautonomous vehicles on American roads is no longer the stuff of science fiction. 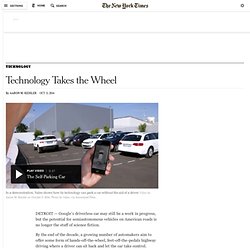 By the end of the decade, a growing number of automakers aim to offer some form of hands-off-the-wheel, feet-off-the-pedals highway driving where a driver can sit back and let the car take control. The very nature of driving, experts say, will be radically reshaped — and the biggest players in the auto industry are now vying to capture a slice of the revolutionary market they see coming within a matter of years. “This is the year we’ll look back on as the turning point,” said Scott Belcher, president of the nonprofit Intelligent Transportation Society of America, who has helped organize a global connected car expo for seven years. Photo. Autonomous Aerial Navigation in Confined Indoor Environments. Service desing for autonomous vehicles. Autonomous vehicle google. Autonomous Vehicles. Self driving vehicles.

Autonomous Vehicle. Future of autonomous driving. The internet of things. A Bot in Every Garage and on Every Street. Here's an idea on how fast bots are going to roll out and why botageddon in some form is inevitable. 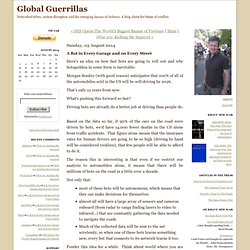 Morgan Stanley (with good reason) anticipates that 100% of all of the automobiles sold in the US will be self-driving by 2026. That's only 12 years from now. What's pushing this forward so fast? Driving bots are already do a better job at driving than people do. Based on the data so far, if 90% of the cars on the road were driven by bots, we'd have 14,000 fewer deaths in the US alone from traffic accidents.

The reason this is interesting is that even if we restrict our analysis to automobiles alone, it means that there will be millions of bots on the road in a little over a decade. Not only that: Ponder this idea for a while. Is botageddon getting easier to imagine? Drone Cargo Ships Will Make the Real World Work Like the Internet. Image: Rolls-Royce Holdings Rolls Royce is moving toward a world where a single tap on a smartphone could set a massive cargo ship in motion half a world away. 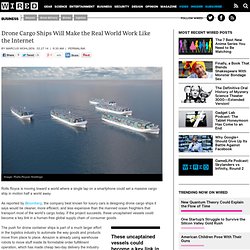 As reported by Bloomberg, the company best known for luxury cars is designing drone cargo ships it says would be cleaner, more efficient, and less expensive than the manned ocean freighters that transport most of the world’s cargo today. If the project succeeds, these uncaptained vessels could become a key link in a human-free global supply chain of consumer goods. The Platform for Unmanned Cargo Aircraft (PUCA) - Platform Unmanned Cargo Aircraft. Los Angeles Is Building an e-Highway. Automated Driving: Legislative and Regulatory Action - CyberWiki. Liability and Regulation of Autonomous Vehicle Technologies. Autonomous vehicle technologies and advanced driver-assistance systems have the potential to significantly improve transportation safety and efficiency, and, collectively, they may offer tremendous social, economic, and environmental benefits. 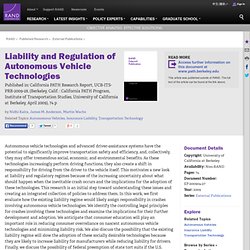