Draw How To Make Toast - a Wicked Problem Solving™ Tool 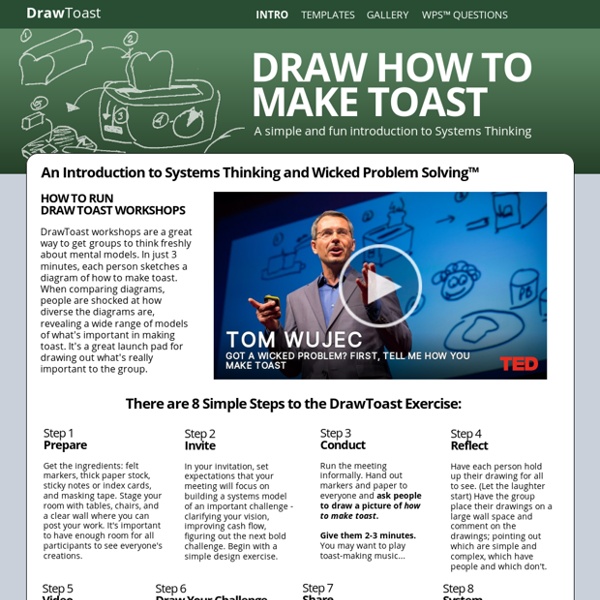 Visible Thinking VisibleThinking In Action Every committed educator wants better learning and more thoughtful students. Visible Thinking is a way of helping to achieve that without a separate ‘thinking skills' course or fixed lessons. The Magic of Idea Math In mid-2002 I was so depressed I simply ran out of ideas. Depression scorches the earth of your brain. I would sit in it at 3 in the morning in the dark. Lord of my crumbling kingdom. Every day I went a little more broke and there was nothing I could do about it.

Model Gallery You can use this page to get a quick overview of the wide range of models that can be constructed in Simile. Each entry gives some text on the model, a model diagram (usually an outline view for all but the simplest of models), and a sample screen display from the running model. Models are arranged roughly in order of increasing complexity and increasing sophistication of the Simile techniques used. Exponential population growth Design Thinking... What is That? To promote its new Athleisure Makeup line, Tarte partnered with social media "fitfluencers" to push the concept that "sporty is the new sexy." The campaign, titled Hustle & Glow, includes a beautifully produced video in which a woman wakes up in her spacious Malibu mansion and heads to the bathroom for a full beauty routine in preparation to . . . go on a solo run. The video was met with wide appreciation from Tarte fans (and nearly 80,000 YouTube views), with many saying it inspired them to get out there and look good on the asphalt (or sand). As athleisure becomes more than just a fashion trend, it’s extended into new, unexpected categories. Cosmetics is one of them. It’s makeup that’s easy, comfy, and suited for an active individual.

Putting Elon Musk and Steve Jobs on a Pedestal Misrepresents How Innovation Happens Since Steve Jobs’s death, in 2011, Elon Musk has emerged as the leading celebrity of Silicon Valley. Musk is the CEO of Tesla Motors, which produces electric cars; the CEO of SpaceX, which makes rockets; and the chairman of SolarCity, which provides solar power systems. A self-made billionaire, programmer, and engineer—as well as an inspiration for Robert Downey Jr.’s Tony Stark in the Iron Man movies—he has been on the cover of Fortune and Time. In 2013, he was first on the Atlantic’s list of “today’s greatest inventors,” nominated by leaders at Yahoo, Oracle, and Google.

Cost Benefit – Gamestorming This game is most probably the most simple collaborative cost benefit analysis ever. It is applicable onto subjects where a group has expert knowledge about costs and/or benefits. A group of developers is such an example. Especially a customer or customer proxy will have interest when it comes to prioritizing work items. Generation ideas If the list of work items is not existent you can start this exercise by a silent post-up. System Dynamics — AnyLogic Simulation Software Hierarchical and object-oriented SD modeling AnyLogic naturally offers all the benefits of the OO approach to system dynamics modelers. You can define complex models in a hierarchical manner where logically separate parts of the stock and flow diagram are contained in different active objects and expose only their interface variables (as inputs or outputs). Moreover, you can develop a frequently met SD pattern, embed it in an active object class and reuse it as many times as you wish within one model or across models. Creating flight simulators.

These are Google’s 4 best practices for fostering creativity and innovation “How many golf balls could you fit in a school bus?” This is the kind of question Google and its big tech brethren were once known for asking would-be employees. The reasoning behind the technique seemed intuitive. Ask people odd questions, see how original and well analysed their thought process was, and you’ll end up hiring creative high-performers.

The Gift-Giving Project The Gift-Giving Project is 90-minute (plus debrief) fast-paced project though a full design cycle. Students pair up to interview each other, come to a point-of-view of how they might design for their partner, ideate, and prototype a new solution to "redesign the gift-giving experience" for their partner. The gift-giving project has the same structure as the wallet project, only the topic is changed. You can see all the information about how to run the activity on that page: The Wallet Project