24h HOST - Lauren Lee McCarthy. * A cocktail party generated by a machine hosted by a human. 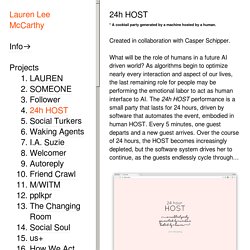 Created in collaboration with Casper Schipper. What will be the role of humans in a future AI driven world? As algorithms begin to optimize nearly every interaction and aspect of our lives, the last remaining role for people may be performing the emotional labor to act as human interface to AI. The 24h HOST performance is a small party that lasts for 24 hours, driven by software that automates the event, embodied in human HOST. Generative Design. Godart Raets \ Interstellar \\ codedoodl.es. Shader - Shadertoy BETA. This help only covers the parts of GLSL ES that are relevant for Shadertoy. 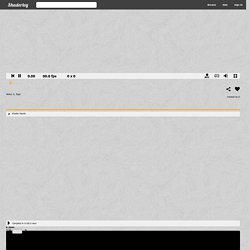 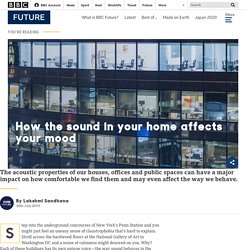 He is inspired by open spaces that have unique sonic features, such as such as Japanese gardens that feature dry stone waterfalls that tinkle like real waterfalls, by clever positioning of water features out of sight. He studies what he calls “exemplary” sound spaces in an attempt to find out what makes them special, be it geometric forms or the arrangement of materials in a room. (82) Mogees - Play the World. Justin Durazzo. Codedoodl.es \\ creative code sketches. Creative Space Registration. Studio Roosegaarde. Void. Quantified Lives on Discount – SHARE LAB. This is the third and final story in our investigation trilogy titled Facebook Algorithmic Factory, created with the intention to map and visualise a complex and invisible exploitation process hidden behind a black box of the World’s largest social network. 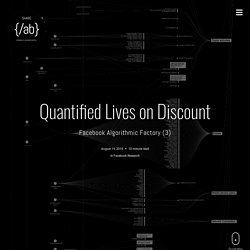 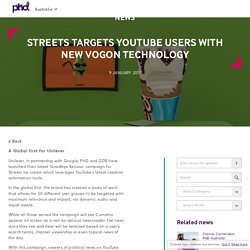 In the global first, the brand has created a body of work that allows for 50 different user groups to be targeted with maximum relevance and impact, via dynamic audio and visual assets. While all those served the campaign will see Cornetto appear on screen as a not-so-serious newsreader, the news story they see and hear will be selected based on a user’s search terms, channel viewership or even topical news of the day. With this campaign, viewers of political news on YouTube may hear Cornetto’s view on global warming while subscribers to cricket.com might be updated on Golden Gaytime’s unfortunate injury in a recent test match. Other targets include hip hop fans, film buffs, fitness enthusiasts and even those seeking DIY advice.

It’s one thing to say you want a culture of innovation. 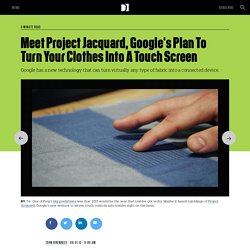 It’s another to actually get everyone truly innovating. We hear it all the time from the executive suite—take more risks, embrace uncertainty, learn from failure. The problem is that these mandates don’t necessarily move the needle. In fact, if they become seen as leadership lip service, they can actually lower morale and stifle the very innovation you want most. Resources - Technology Will Save Us. TimeRepublik, the ultimate Sharing Economy Experience: a global TimeBank where you share your talents, interests and passions in exchange for time.

Memomi – MemoryMirror. The 10 Most Creative New Business Ideas Out There. My News - Personalized News You're Tracking - DailyMe.com. The Xeros Technology. Top 10 business ideas & opportunities for 2016. Just like the Nerdalize servers, the best innovations look to solve more than one problem at once. 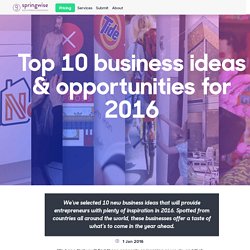 Tackling the dual problems of derelict housing lots and a lack of affordable housing in Amsterdam, Heijmans ONE are complete, self-contained two storey living units. They cost around EUR 700 per month to rent and come equipped with all the basic required facilities, including kitchen, bathroom, separate bedroom, living room and outside patio space.

The Pros and Cons of Photogrammetry vs. 3D Scanning for 3D Printed Figurines - Mcor Technologies. » Capturing Motion with Photogrammetry and PhotoModeler. Posted on Friday, October 11th, 2013 In this post I highlight the practical uses of PhotoModeler Motion (PMM), and feature two example projects. 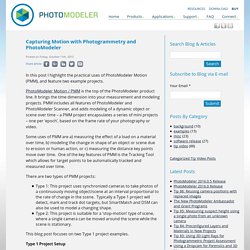 PhotoModeler Motion / PMM is the top of the PhotoModeler product line. It brings the time dimension into your measurement and modeling projects. Anybody can learn. Robinhood - Global. EAZE: Medical Marijuana Delivery. Empowering innovative companies to recruit and retain diverse talent. Joelle Emerson Founder & CEO As the Founder and CEO of Paradigm, Joelle partners with leaders of some of the world's most exciting and innovative companies to develop and execute effective diversity strategies.

Payroll. Benefits. Compliance. TransferWise for Business. Live Out Your Superhero Fantasies with Advanced 3D-Imaging. XxArray's 3D capture kit—now on a North American tour—takes the human body to super-being proportions Rolling around in toxic waste is no longer the best way to turn yourself into a super-being, thanks to detailed 3D-scanning and digital avatar tech from xxArray. 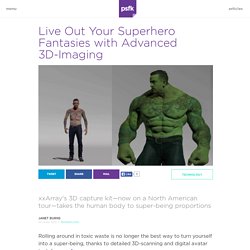 Having assumed (correctly) that we’ve all been dreaming of a way to turn ourselves into interactive, souped-up avatars, the team is currently on its 14-city xxArray 3D Capture Tour and promoting its gear via Kickstarter, thereby bringing access to its 3D avatar development kit to the masses. Open Your Ears To The News. Project Manager Gabi’s hopped around the media industry, turning her hand to any number of mediums and roles. 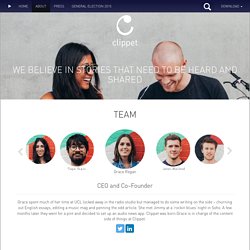 After her Journalism BA in Sydney she set off for Amsterdam, where she helped run Amsterdam’s best known music radio station, Red Light Radio. When she got wind of an audio news app that was going revolutionize the industry, it was something she knew she had to be part of. Bare Conductive. Livestream: Direct from Advertising Week Europe - 23-27 March 2015. Too old to start a new venture? Take a look at these famous entrepreneurs. All the current 20-something CEOs are ruining it for people who may facing a mid-life crisis. These infographics prove why it’s never to late to start your own venture. Check it out below. Plastic to Oil Fantastic. POST Exhibition Teaser. A New World of Storytelling. This large-scale building kit helps kids learn about engineering, architecture, and design through play. The Rigamajig is a 263-piece large-scale building kit for children, which comes with no instructions or directions, but instead encourages kids to follow their own curiosity to learn about engineering, design, architecture, art, and science, through playing.

EcoLogicStudio's BIO-URBAN Design Lab in the Sonoran desert, Arizona. Win A VIP Concert Experience in Rio with Miley Cyrus. Cannes Predictions – Part 1. Viral Video Chart: Adidas scores this week's top spot with help from Messi, Alves, Suárez and Özil. Wireframe UX Prototyping Tool. The Rise of Interactive Quizzes. Interactive quizzes involving muppets, home places and House of Cards characters have suddenly become some of the most popular content formats on the web. We look at the share figures. Whisper - Share Secrets, Express Yourself, Meet New People. Description. Whether you take photos to be creative or just for fun, now is your chance to keep doing what you love to do and be rewarded, recognized, and engaged by your favorite brands!

SnapMyAd is a free mobile app that allows you to take photos of your real brand experiences and exchange them for real brand perks. Advertisers & Agencies. From Ad to Basket – we deliver your Ad to a large, addressable and engaged audience. Get Paid To Click, Watch Videos, Complete Offers, SignUp... Snow Fall: The Avalanche at Tunnel Creek - Multimedia Feature. Cover Story: Daft Punk. Daft Punk started working on Random Access Memories in 2008, playing almost everything on their own and making loops, just like they had done before. But it didn't feel right. What makes us happy? Three New Things. Our RISD — Earlier in the month, outgoing President John... Earlier in the month, outgoing President John Maeda presented Post-digital: the past, present and future of design and technology, an insightful (and at times humorous) talk aimed at RISD students.

What You Get When You Pour Molten Aluminum Into An Ant Hill. Dhairya dand. Neurosynaptic chips. SJET. 3D Scanning.