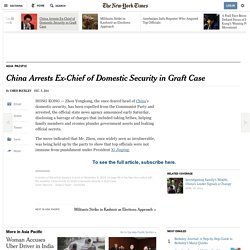 The move indicated that Mr. Zhou, once widely seen as invulnerable, was being held up by the party to show that top officials were not immune from punishment under President Xi Jinping. The announcement signaled the biggest move yet in Mr. Xi’s two-year campaign to curb graft and malfeasance in the party hierarchy. “Corruption is a cancer that has invaded the party’s healthy tissue,” an editorial in People’s Daily, the party’s main newspaper, said Saturday. Continue reading the main story OPEN Graphic Graphic: Zhou Family Ties The decision by the Communist Party Politburo, a council of 25 senior officials, to expel Mr.

Until now under Mr. Here's a list of websites blocked in China. “On April 20, 1994, the Chinese Academy of Sciences (CAS) Institute of High Energy Physics (IHEP) built the first cable connected to the Internet, realizing email communication with North America and Europe.” 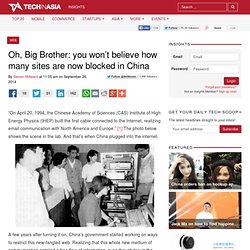 The photo below shows the scene in the lab. And that’s when China plugged into the internet. A few years after turning it on, China’s government started working on ways to restrict this new-fangled web. Realizing that this whole new medium of communication entailed a free flow of information, even though few in the country had access to it yet, work began in 1998 on the Golden Shield Project. It was ready by late 2003. This system of web censorship has grown enormously in scope and strength in the past decade. All the blocks implemented by the Great Firewall look like a scattergun approach to suppressing free speech, but there’s a method to it. Block party To find out how extensive the blocks have become, we’ve used the superb resource that is GreatFire.org. Wait. Search engines. Drugs in China: Authorities crack down on expat dealers in Beijing. Courtesy of China Daily Each Friday, Roads & Kingdoms and Slate publish a new dispatch from around the globe. 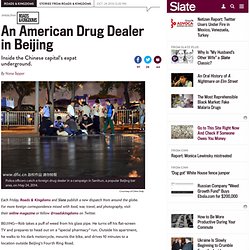 For more foreign correspondence mixed with food, war, travel, and photography, visit their online magazine or follow @roadskingdoms on Twitter. BEIJING—Rob takes a puff of weed from his glass pipe. He turns off his flat-screen TV and prepares to head out on a “special pharmacy” run. 12 of China's hottest hardware startups. We’ve all heard of Nest, Oculus Rift, Pebble, Dropcam, and SmartThings – but what are the hottest hardware startups coming out of China? 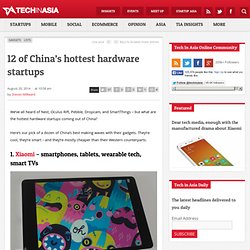 Here’s our pick of a dozen of China’s best making waves with their gadgets. They’re cool, they’re smart – and they’re mostly cheaper than their Western counterparts. 1. Xiaomi – smartphones, tablets, wearable tech, smart TVs Can Xiaomi still be called a startup now that it’s on course to sell 60 million phones this year and is probably valued at tens of billions of dollars? Xiaomi is clearly China’s hottest new hardware company. Xiaomi has gradually branched out over the past few years to make a set-top box, a smart TV, the MiPad tablet (pictured top), a router, the Mi Band fitness tracker (pictured above), and a bunch of accessories.

How did China's culture and development create its huge population? Courtesy of Wikimedia Commons This question originally appeared on Quora. 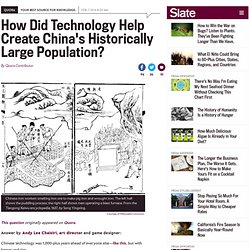 Answer by Andy Lee Chaisiri, art director and game designer: Chinese technology was 1,000-plus years ahead of everyone else—like this, but with horses and rice. Imagine if today's crops suddenly became 30 times more productive. That would cause a population boom, right? Seed drill: What if we planted the seeds under the soil? Seed drills are tools that bury seeds at a correct depth in a timely manner. Chinese were using metal multitubed seed drills as early as 200 B.C. Compared to this hand-planting method, using a seed drill to plant crops in rows is 10 to 30 times more efficient in terms of how much grain you can harvest versus needing to save it for the next planting. Iron moldboard plow: Metal cuts better than wood? Imagine a plow. Around 400 A.D., a similar moldboard plow appears in the Roman Empire, but widespread adoption is delayed with the fall of the empire.

How did China's culture and development create its huge population?