Innovation for the Classroom

More and more of us are recycling our waste at home in a bid to save resources - but could manufacturers do more themselves, by using recycled products as their raw materials in the first place? 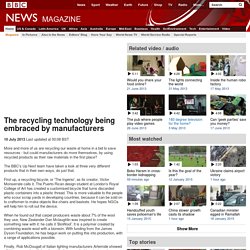 The BBC's Up Next team have taken a look at three very different products that in their own ways, do just that. First up, a recycling bicycle, or 'The Ingenio', as its creator, Victor Monserrate calls it. The Puerto Rican design student at London's Royal College of Art has created a customised bicycle that turns discarded plastic containers into a plastic thread. Six Great Online Games for Summer Learning. William Kamkwamba: How I harnessed the wind. Moving Windmills Project. Moving Windmills Project seeks financial support for community initiatives in Wimbe, Malawi. 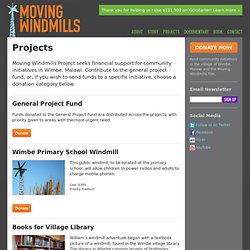 Contribute to the general project fund, or, if you wish to send funds to a specific initiative, choose a donation category below. General Project Fund Funds donated to the General Project Fund are distributed across the projects, with priority given to areas with the most urgent need. Wimbe Primary School Windmill This public windmill, to be located at the primary school, will allow children to power radios and adults to charge mobile phones. Cost: $300Priority: medium Books for Village Library. Moving Windmills Project. A feature length documentary film Following the award-winning short film Moving Windmills, the feature-length documentary William and the Windmill tells the story of how William Kamkwamba built a power-generating windmill from junk parts to rescue his family from famine, as well as the subsequent changes in his life and village as a result of his invention. 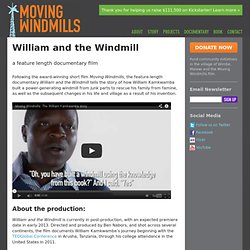 William and the Windmill is currently in post-production, with an expected premiere date in early 2013. Directed and produced by Ben Nabors, and shot across several continents, the film documents William Kamkwamba’s journey beginning with the TEDGlobal Conference in Arusha, Tanzania, through his college attendance in the United States in 2011. Windmills: William Kamkwamba’s Electric Wind. William Kamkwamba (Credit) In 2002, fourteen year old William Kamkwamba was a normal schoolboy living in anything but normal times in a country ruled by poverty, starvation and death. 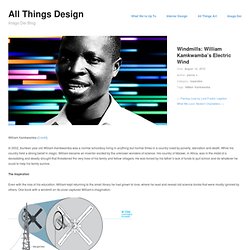 While his country held a strong belief in magic, William became an inventor excited by the unknown wonders of science. His country of Malawi, in Africa, was in the midst of a devastating and deadly drought that threatened the very lives of his family and fellow villagers. BuildOn - buildOn breaks the cycle of poverty, illiteracy, and low expectations through service and education. Make Create Innovate. You only need 3 things to be creative. According to Teresa Amabile, you ‘only’ need three ingredients to be creative: source: Teresa Amabile 'How to Kill Creativity' KnowledgeToolsMotivation Great, you say, I know quite a few things, I have some tools in my shed and I am motivated to bits. 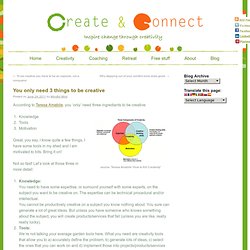 Bring it on! Not so fast! Creativity—It’s our future. Share this Episode Please select a language: Autoplay End of Video Show End Screen Default Quality Adjust your embed size below, then copy and paste the embed code above. 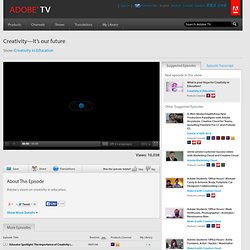 Community Translation Episode available in 2 languages Available Translations: Join the Community Translation Project Thanks for your interest in translating this episode! Please Confirm Your Interest Thanks for your interest in adding translations to this episode! My Anti-Creativity Checklist. How to Kill Creativity. English As An Additional Language. 21st Century Schools or 21st Century Learning? A Tale of Two Classrooms: Compare & Contrast Image Credit: Krissy Venosdale Just let me start off by saying that the term "21st Century Learning" still drives me crazy. 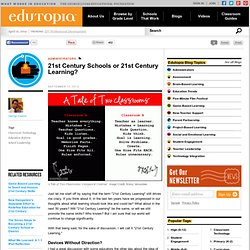 If you think about it, in the last ten years have we progressed in our thoughts about what learning should look like and could be? What about in the next 50 years? Will "21st Century Learning" be the same, or will we still promote the same skills? Who knows? With that being said, for the sake of discussion, I will call it "21st Century Learning.

" Devices Without Direction? I had a great discussion with some educators the other day about the idea of "21st Century Schools vs. 21st Century Learning. " The Future Of Education Eliminates The Classroom, Because The World Is Your Class. This probably sounds familiar: You are with a group of friends arguing about some piece of trivia or historical fact. 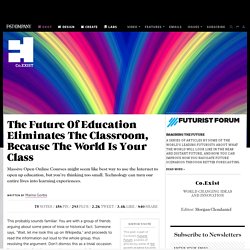 Someone says, "Wait, let me look this up on Wikipedia," and proceeds to read the information out loud to the whole group, thus resolving the argument. Don’t dismiss this as a trivial occasion. It represents a learning moment, or more precisely, a microlearning moment, and it foreshadows a much larger transformation—to what I call socialstructed learning. Socialstructed learning is an aggregation of microlearning experiences drawn from a rich ecology of content and driven not by grades but by social and intrinsic rewards. School Day Of The Future. How Do We Prepare Our Children for What’s Next? 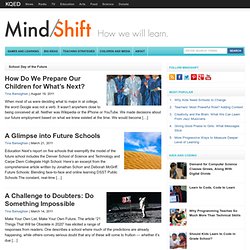 When most of us were deciding what to major in at college, the word Google was not a verb. It wasn’t anywhere close to being conceived at all. Creativity is the Future of Education. Building A Thinking Classroom Without Technology. Five Future Trends That Will Impact the Learning Ecosystem. As summer reflections on the past school year turn into aspirations for the next year, it's important to keep in mind the big picture of change in education. 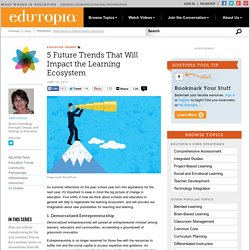 Five shifts in how we think about schools and education in general will help to regenerate the learning ecosystem, and will provoke our imagination about new possibilities for teaching and learning. 1. Democratized Entrepreneurship Democratized entrepreneurship will spread an entrepreneurial mindset among learners, educators and communities, accelerating a groundswell of grassroots innovation. Entrepreneurship is no longer reserved for those few with the resources to buffer risk and the social capital to access expertise and guidance.