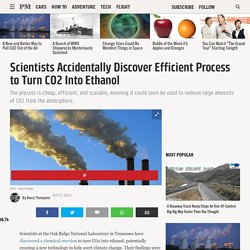 Their findings were published in the journal ChemistrySelect. [Go here for a new in-depth interview about the findings with one of the lead researchers.] The researchers were attempting to find a series of chemical reactions that could turn CO2 into a useful fuel, when they realized the first step in their process managed to do it all by itself. The reaction turns CO2 into ethanol, which could in turn be used to power generators and vehicles. Germany unveils zero-emissions train that only emits steam. Germany is set to introduce the world’s first zero-emission passenger train to be powered by hydrogen. 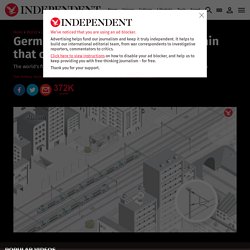 New Solar Device Removes Carbon Dioxide From the Atmosphere. A new type of solar-powered technology has the potential to play a big role in the fight against climate change if its inventors can take it from the laboratory to industrial-scale use. 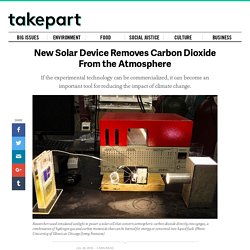 On Thursday, a team of scientists announced in the journal Science that they have created a device that absorbs carbon dioxide from the atmosphere and uses sunlight to break it into a mix of carbon monoxide and hydrogen called synthesis gas or “syngas,” that can be used directly or turned into diesel or other liquid fuels, said Amin Salehi-Khojin, a mechanical engineer at the University of Illinois at Chicago who leads the lab that conducted the research. The team aims to produce fuel at about $2 a gallon, he said, a price that would be cost-competitive with gasoline and, in his opinion, make drilling for oil or gas obsolete. Although burning such a transportation fuel would release the carbon back into the atmosphere, it could be considered a carbon-neutral energy source. 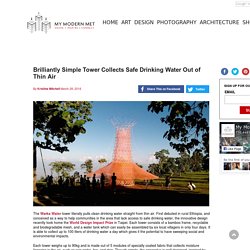 First debuted in rural Ethiopia, and conceived as a way to help communities in the area that lack access to safe drinking water, the innovative design recently took home the World Design Impact Prize in Taipei. Each tower consists of a bamboo frame, recyclable and biodegradable mesh, and a water tank which can easily be assembled by six local villagers in only four days. It is able to collect up to 100 liters of drinking water a day which gives it the potential to have sweeping social and environmental impacts.

Each tower weighs up to 90kg and is made out of 5 modules of specially coated fabric that collects moisture lingering in the air, such as rain water, fog, and dew. Homes that generate more energy than they consume - Blueclimat. More and more homes are powered by renewable energy, which allows its owners to reduce their electricity bill. 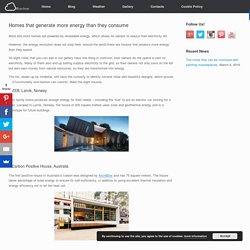 However, the energy revolution does not stop here: around the world there are houses that produce more energy than they spend. All eight villas that you can see in our gallery have one thing in common: their owners do not spend a cent on electricity. Many of them also end up selling surplus electricity to the grid, so their owners not only save on the bill but also earn money from natural resources, so they are transformed into energy. The list, drawn up by Inhabitat, still have the curiosity to identify several villas with beautiful designs, which proves that functionality and fashion can coexist. Meet the eight houses. Construction Begins on World’s Largest Floating Solar Power Plant.

Construction of the world’s largest floating solar power plant, set to cover an area of the Yamakura Dam reservoir the size of 37 football fields, has begun in Japan. 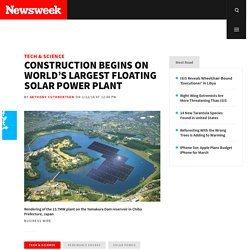 The plant, scheduled for completion in March 2018, will generate an estimated 16,170 megawatt hours (MWh) per year—enough electricity to power approximately 4,970 households. The joint venture between Kyocera Corporation and Century Tokyo Leasing (CTL) is expected to offset CO2 emissions equivalent to 19,000 barrels of oil annually. Try Newsweek for only $1.25 per week At the COP21 conference in Paris in December 2015, India Prime Minister Narendra Modi called solar power the key to reversing climate change. These Sky-High Balloons Could Generate More Power Than Solar Panels. For all the cost and efficiency improvements in solar panels in the last few years, all land-based photovoltaics have one serious Achilles Heel: performance is dependent on the weather. 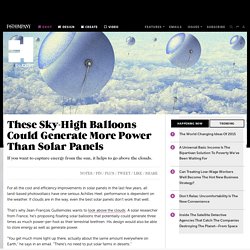 If clouds are in the way, even the best solar panels don't work that well. The World Could Run Entirely On Wind, Solar, And Hydro Power By 2050. In a few decades, the world could be powered by nothing but wind, water, and sunlight. 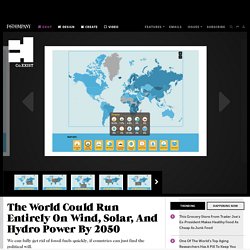 That's the conclusion of a new study released just before world leaders head to Paris to strike a climate deal. "These are basically plans showing it's technically and economically feasible to change the energy infrastructure of all of these different countries," says Mark Z. Jacobson, director of the Atmosphere/Energy Program at Stanford University, who worked with University of California colleagues to analyze energy roadmaps for 139 countries (you can see a few above). The researchers crunched numbers to see how much energy each country would need by 2050—including electricity, transportation, heating and cooling, industry, and agriculture—and then calculated how renewable energy could cover those needs, where it could go, and how much it would cost.

Renewable energy is already cheap and will get cheaper. Wales to host four of world's first tidal lagoons under new Government-backed plans unveiled today. Solarizing Greece is a way out of the crisis. Greece is facing a depression on a scale arguably comparable to the US Great Depression of the late 1920s. 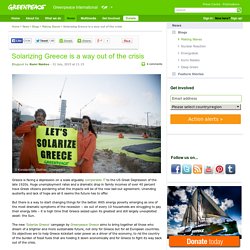 Huge unemployment rates and a dramatic drop in family incomes of over 40 percent have Greek citizens pondering what the impacts will be of the new bail-out agreement. Unending austerity and lack of hope are all it seems the future has to offer. A Dutch Student’s Giant Ocean Cleanup Machine Is Going Into Production. The oceans have a plastic debris problem, and it’s growing by 8 million tons a year. 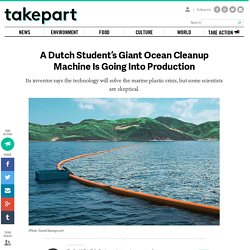 Three years ago, a Dutch teenager named Boyan Slat garnered global accolades for a solution he devised for a high school science fair: a passive ocean trash collection device that would collect ocean plastic without harming marine life. These days, Slat is a 20-year-old entrepreneur who is eager to put his massive ocean-cleaning idea to the test. The City as Lab: 21 Metropoles Prepare to Prototype - Cities - GOOD. Finland schools: Subjects scrapped and replaced with 'topics' as country refo... For years, Finland has been the by-word for a successful education system, perched at the top of international league tables for literacy and numeracy.

Only far eastern countries such as Singapore and China outperform the Nordic nation in the influential Programme for International Student Assessment (PISA) rankings. New wind turbine looks like a tree, generates power silently. Wind turbines used for power generation work best when they’re large and mounted up high where wind speed is higher. This is not an aesthetically appealing proposition, but it’s the only way wind power makes sense on the large scale right now. A French company is trying to change that with a contraption called the Wind Tree. As you might guess, it’s an array of wind power turbines in the shape of a tree, and several of them will be deployed in Paris this coming March as a test. World's largest tidal energy power plant (269 turbines) to begin construction... When you think about it, it's really Moon power!

The MeyGen tidal project in Scotland will be the largest tidal power plant in the world once operational. Atlantis, the Australian company that is building it has just received the green light from the government and construction should begin this month. The tidal project will be located in an area that lies in the channel ("Inner Sound") between the island of Stroma and the north easterly tip of the Scottish mainland, encompassing almost 3.5 square-km of fast flowing water. When MeyGen is fully operational, it should have 269 turbines that produce 398MW of clean energy, generating enough electricity to power 175,000 Scottish homes.

The Inventors Of A 'Revolutionary' Climate Solution Just Won A Nobel Prize. Copenhagen's ambitious push to be carbon-neutral by 2025. House of Green - Home. New Solar Power. Putting Solar Panels On School Roofs Could Dramatically Increase America's Solar Capacity. By Jeff Spross Posted on "Putting Solar Panels On School Roofs Could Dramatically Increase America’s Solar Capacity" This Tower Pulls Drinking Water Out of Thin Air. Designer Arturo Vittori says his invention can provide remote villages with more than 25 gallons of clean drinking water per day. Hemp Can Remediate Fukushima Radiation. Scientists Turn Algae Into Crude Oil In Less Than An Hour. Multiple Scientists Confirm The Reality of Free Energy – Here’s The Proof. Who is benefiting from suppressing scientific research? Whose power and wealth is threatened by access to clean and free energy? Transparent Solar Concentrator Could Turn Your Window Into a Power Source.