Science, technology and innovation to October 2013

How 3-D Printing Startups Are Shaping the Future. "10-22-38 Astoria" -- that was the message written on the first photocopied page, which was produced in 1938. 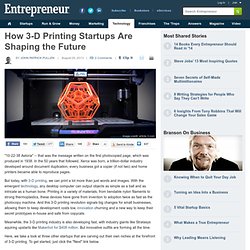 THE SIXTH WAVE: THE RISE OF THE CREATIVE CITIES. Innovation is no longer driven by states or nations. 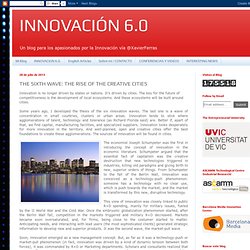 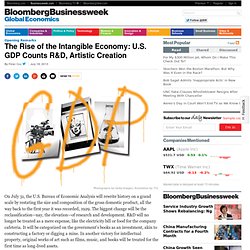 Safecity Crowdsources India’s Sexual Assault Incidents To Highlight Danger Zones. Four Indians are exposing India’s sexual harassment hotspots via Safecity, a website for victims to anonymously report when and where they were abused. 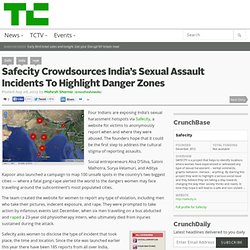 The founders hope that it could be the first step to address the cultural stigma of reporting assaults. Social entrepreneurs Alsa D’Silva, Saloni Malhotra, Surya Velamuri, and Aditya Kapoor also launched a campaign to map 100 unsafe spots in the country’s two biggest cities — where a fatal gang-rape alerted the world to the dangers women may face travelling around the subcontinent’s most populated cities. The team created the website for women to report any type of violation, including men who take their pictures, indecent exposure, and rape. Safecity Crowdsources India’s Sexual Assault Incidents To Highlight Danger Zones. Researchers Build The First Brain-To-Brain Control Interface. Researchers at the University of Washington, Rajesh Rao and Andrea Stocco, have created a remote, non-invasive brain-to-brain interface that allowed Rao to move Stocco’s finger remotely on a keyboard using his thoughts. 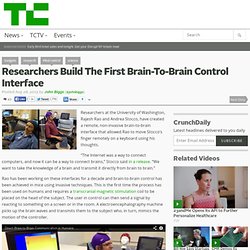 This Magical Desalinating Water Bottle Will Make The Ocean Drinkable. This bottle that separates drinking water from ocean water doesn't exist yet--except in the renderings you see here. 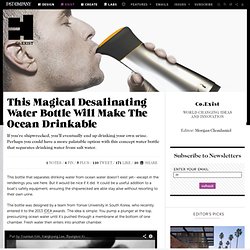 But it would be nice if it did. It could be a useful addition to a boat's safety equipment, ensuring the shipwrecked are able stay alive without resorting to their own urine. The bottle was designed by a team from Yonsei University in South Korea, who recently entered it to the 2013 IDEA awards. Growing shoes and furniture: A design-led biomaterial revolution. The natural world has, over millions of years, evolved countless ways to ensure its survival. 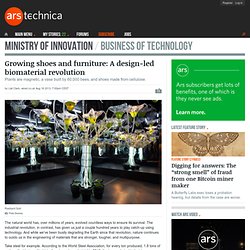 The industrial revolution, in contrast, has given us just a couple hundred years to play catch-up using technology. And while we've been busily degrading the Earth since that revolution, nature continues to outdo us in the engineering of materials that are stronger, tougher, and multipurpose. Take steel for example. According to the World Steel Association, for every ton produced, 1.8 tons of carbon dioxide is emitted into the atmosphere. 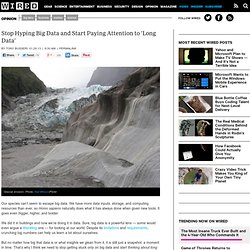 We have more data inputs, storage, and computing resources than ever, so Homo sapiens naturally does what it has always done when given new tools: It goes even bigger, higher, and bolder. Cradle turns smartphone into handheld biosensor. CHAMPAIGN, Ill. - Researchers and physicians in the field could soon run on-the-spot tests for environmental toxins, medical diagnostics, food safety and more with their smartphones. 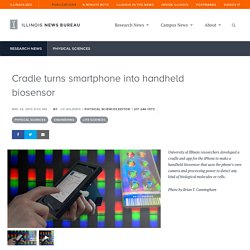 University of Illinois at Urbana-Champaign researchers have developed a cradle and app for the iPhone that uses the phone's built-in camera and processing power as a biosensor to detect toxins, proteins, bacteria, viruses and other molecules. Having such sensitive biosensing capabilities in the field could enable on-the-spot tracking of groundwater contamination, combine the phone's GPS data with biosensing data to map the spread of pathogens, or provide immediate and inexpensive medical diagnostic tests in field clinics or contaminant checks in the food processing and distribution chain. Revolutionary "Superman" Memory Crystals Can Store Data Virtually Forever. Quartz Crystal photo from Shutterstock While most of us are just getting used to the idea of 3D printing, scientists are already working on technological marvels that operate two dimensions deeper. 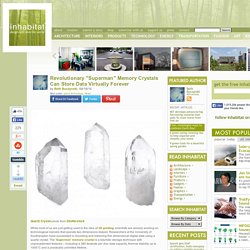 Researchers at the University of Southampton have succeeded in recording and retrieving five dimensional digital data using a quartz crystal. The ‘Superman’ memory crystal is a futuristic storage technique with unprecedented features – including a 360 terabyte per disc data capacity, thermal stability up to 1000°C and a practically unlimited lifetime. We’ve all seen those sci-fi movies where a gorgeous alien shoves a pointy crystal into some mega computer and the world is saved.

Well, it appears that sci-fi has now become sci-reality. New Zealand Man is 3D-Printing a Fully-Functional 1961 Aston Martin Replica. Chinese Scientists Grow False Teeth From Human Urine. Over the years scientists have made false teeth from a variety of materials – from cuspids crafted out of animal bone to chompers made from wood and gold. However a group of Chinese scientists just announced that they have successfully grown “rudimentary teeth” from an extremely unlikely and slightly unsettling source: human pee.

According to the research, published in Cell Regeneration Journal, the tiny tooth-like structures were grown from stem cells harvested from urine. While the scientists believe it could herald a new, albeit disturbing, age for false teeth, stem cell researchers believe they could have several hurdles to overcome. The Chinese research team, which is based at the Guangzhou Institutes of Biomedicine and Health used urine as it contains cells that are normally passed out of the body – but in the laboratory they can be come stem cells. These cells were then mixed with organic material to form teeth.

. + Cell Regeneration Journal via BBC News. Researchers claim 3-D printers pose 'health risk' CHICAGO — Three-dimensional printers using the fused deposition molding (FDM) process could pose a health risk to operators, according to researchers from the Illinois Institute of Technology in the U.S. and the National Institute of Applied Sciences in Lyon, France. NeverWet Arrives - Hands-On Product Demonstration. The Higher Education Bubble Begins To Burst. The Higher Education Bubble Begins To Burst Check out this New York Times article on the beginning of the bursting of the higher education bubble.

In the 2012-2013 school year enrollment in for-profit and community colleges dropped. Now enrollment in 4 year non-profit colleges has begun dropping too. A Wall Street Journal article makes similar points. Some colleges will close. The number of kids turning 18 has begun to contract. I expect to a substantial shift toward online learning in order to save costs, speed up education, and get far greater convenience. The rise of massive open online courses (MOOCs) will let most students watch higher quality lectures than they can watch at which ever university they attend. 10 Ways Google Glass Will Change Us — Whether We're Ready Or Not. We have not fully appreciated what "Google Glass" (Google's term for its new wearable computer) will actually mean for our future.

If this product is widely used there will be fundamental and irrevocable changes coming soon to our society — sooner than we think. I can envision at least 10: 'Drone It Yourself' Lets You Create a Drone from Any Object. Scientists break record for thinnest light-absorber. July 18, 2013 Stanford scientists have built the thinnest, most efficient absorber of visible light on record, a nanosize structure that could lead to less-costly, more efficient, solar cells. July 2013: The Future Of Flight. Dear Mr Editor, 3-D-printed Cortex cast improves on plaster version. Flexible Glass Solar Cells Could Boost Effectiveness of Solar Shingles. Technology - 3D printing powered by thought.

Imagine if you could print objects just by thinking about them.