Solar FREAKIN' Roadways! Google balloons, “cell towers in the sky,” can serve 4G to a whole state. Google’s plan to deliver Internet service from balloons in the stratosphere has come a long way since being unveiled in June 2013. 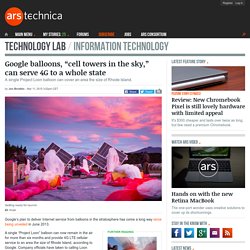 A single “Project Loon” balloon can now remain in the air for more than six months and provide 4G LTE cellular service to an area the size of Rhode Island, according to Google. Company officials have taken to calling Loon balloons “cell towers in the sky.” Japan space scientists make wireless energy breakthrough. © Provided by AFP Electricity gained from solar panels in space could one day be beamed to earth. 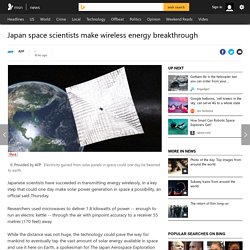 Japanese scientists have succeeded in transmitting energy wirelessly, in a key step that could one day make solar power generation in space a possibility, an official said Thursday. Researchers used microwaves to deliver 1.8 kilowatts of power -- enough to run an electric kettle -- through the air with pinpoint accuracy to a receiver 55 metres (170 feet) away. While the distance was not huge, the technology could pave the way for mankind to eventually tap the vast amount of solar energy available in space and use it here on Earth, a spokesman for The Japan Aerospace Exploration Agency (JAXA) said.

Britain's first 'poo bus' hits the streets. War of Currents. In the War of Currents era (sometimes, War of the Currents or Battle of Currents) in the late 1880s, George Westinghouse and Thomas Edison became adversaries due to Edison's promotion of direct current (DC) for electric power distribution over alternating current (AC). 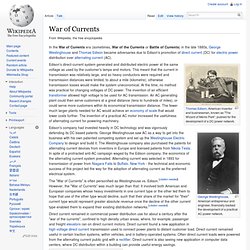 Thomas Edison, American inventor and businessman, known as "The Wizard of Menlo Park", pushed for the development of a DC power network. George Westinghouse, American entrepreneur and engineer, financially backed the development of a practical AC power network. In search for renewable energy sources, could trash be king? Now Playing Forget solar: New push for waste as renewable energy source With the massive "People's Climate March" and the meeting of world leaders at the U.N. 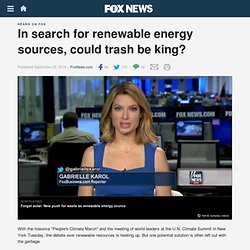 Climate Summit in New York Tuesday, the debate over renewable resources is heating up. But one potential solution is often left out with the garbage. Steve Russell, vice president of the Plastics Division at the American Chemistry Council, spoke to FoxNews.com about the push to make waste-to-energy technologies go mainstream. Bioprinting. Cadillac to offer nearly autonomous car by 2017. By Paul Eisenstein of The Detroit Bureau Hoping to steal a march on its competition, General Motors CEO Mary Barra has announced plans to produce an all but fully autonomous Cadillac model in 2017, while also introducing new features that will allow Caddy vehicles to "talk" to other cars and to a highway infrastructure system. 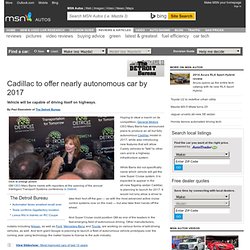 While Barra did not specifically name which vehicle will get the new Super Cruise system, it is expected to appear in the all-new flagship sedan Cadillac is planning to launch for 2017. It would not only allow a driver to take their foot off the gas — as with the most advanced active cruise control systems now on the road — but also take their hands off the wheel. And Super Cruise could position GM as one of the leaders in the fast-emerging field of autonomous driving.

Other manufacturers, notably including Nissan, as well as Ford, Mercedes-Benz and Toyota, are working on various forms of self-driving vehicles, as well. View Slideshow: Top 15 most American cars. Super Human Reality: Lockheed's Bionic Exoskeleton: Video. 7 young technologies changing the world. Kudos to USARogue, the poster I modified this from: The Federal Reserve: 1) Is A Privately Owned Banking Cartel 2) Is A Perpetual Debt Machine 3) Has Destroyed More Than 96% Of The Value Of The U.S. 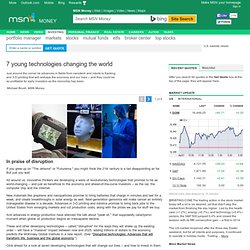 Highspeedrail. Peugeot Citroen will market hybrid car that runs on air. THE END OF SMARTPHONES: Here's A Computer Screen On A Contact Lens. Over in Belgium, scientists have finally taken a crucial step toward building screens into contact lenses. 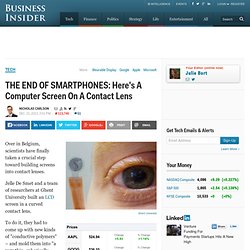 Jelle De Smet and a team of researchers at Ghent University built an LCD screen in a curved contact lens. Nanotechnology Takes Off. What's 100,000 times thinner than a strand of hair? 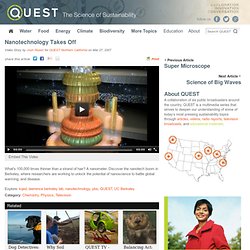 I think it's alright, but we need to get more things that we need. Not more cars that most people probable wont buy!!!!! – brookyyy

And they are -- unless you're a new owner of the company's spiffy Model S sedan. 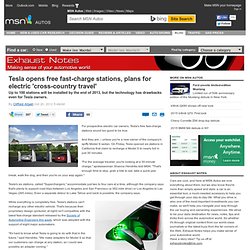 On Friday, Tesla opened six stations in California that claim to recharge a Model S to nearly full in just 30 minutes. "For the average traveler, you're looking at a 30-minute charge," spokeswoman Shanna Hendriks told MSN.