Hendershot FuelLess Generator guide. Blueprints. Free Energy. How To Build a 400sqft Solar Powered Off Grid Cabin for $2k. How to build a nice small cabin powered by solar panels. 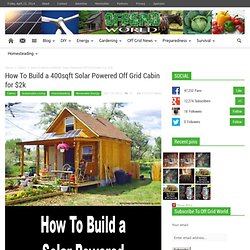 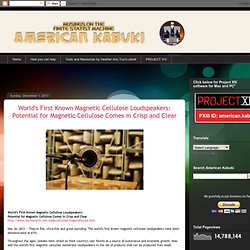 The world's first known magnetic cellulose loudspeakers have been demonstrated at KTH. Throughout the ages, Swedes have relied on their country's vast forests as a source of sustenance and economic growth. This Bamboo Scooter Runs On Nothing But Air. Forget gas, now a scooter exists that is designed to run on nothing but air. 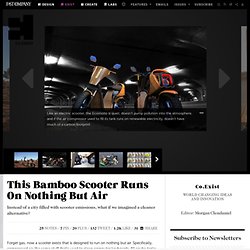 Specifically, compressed air, the same stuff that’s used to clean computer keyboards, fill scuba tanks, fire paintball guns, and more recently, to power cars. Like an electric scooter, the Ecomoto is quiet, doesn’t pump pollution into the atmosphere, and if the air compressor used to fill its tank runs on renewable electricity, doesn’t have much of a carbon footprint. Darby Bicheno, an Australian design student who created the conceptual scooter for a class, says that an air engine runs directly on the air inside, rather than converting energy from a battery. The whole thing is extremely efficient and lightweight. Though the scooter is just a concept at this point, the air-powered engine is already in use. HYDROGEN FREE ENERGY OFF THE GRID HOUSE SOLAR POWERED 1/2. Candle Powered Heater. Foster Gamble : Whole Systems Strategies for Getting Breakthrough Technologies out to the World.

Henry Evans and Chad Jenkins: Meet the robots for humanity. Permaculture: Creating Sustainable Systems. Permaculture is a design science based on the observation of natural systems. 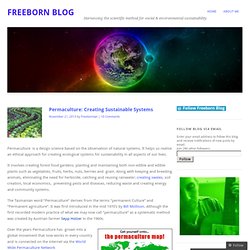 It helps us realise an ethical approach for creating ecological systems for sustainability in all aspects of our lives. It involves creating forest food gardens; planting and maintaining both non-edible and edible plants such as vegetables, fruits, herbs, nuts, berries and grain. Along with keeping and breeding animals, eliminating the need for herbicide, catching and reusing rainwater; creating swales, soil creation, local economics, preventing pests and diseases, reducing waste and creating energy and community systems. The Tasmanian word “Permaculture” derives from the terms “permanent Culture” and “Permanent agriculture”. It was first introduced in the mid 1970′s by Bill Mollison. Over the years Permaculture has grown into a global movement that now works in every country and is connected on the internet via the World Wide Permaculture Network Everything is connected:

Aquaponics and Vertical Farming. Aquaponics is a sustainable, closed-loop food production system that combines traditional aquaculture (breeding/keeping fish) with hydroponics (growing plants without the use of soil) using an eco-system approach within a symbiotic environment. 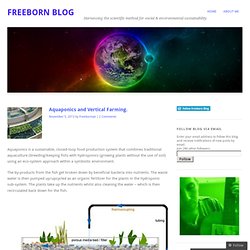 The by-products from the fish get broken down by beneficial bacteria into nutrients. The waste water is then pumped up/upcycled as an organic fertilizer for the plants in the hydroponic sub-system. The plants take up the nutrients whilst also cleaning the water – which is then recirculated back down for the fish. Aquaponics is about recycling wastes into resources, combining technologies, creating eco-systems, promoting biodiversity and producing food. Turn your beer bottles into glass cups! (5 easy steps) Start just using your empty beer bottles and turning them into your new glasses. 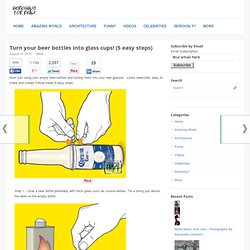 Looks awesome, easy to make and cheap! Follow these 5 easy steps. Step 1 – Grab a beer bottle preferably with thick glass such as corona bottles. Tie a string just above the label on the empty bottle. Step 2 – Keep the string tied and soak it in lighter fluid. Step 3 – Put the string back on the bottle and hold it horizontally. Technology For a New Future Part 1. The Power Of Mhee - Living Without Money (Documentary Pilot) Homemade TIN CAN Rocket Stove - DIY Rocket Stove - Awesome Stove! - EASY instructions! Magnetic method of killing cancer cells has been developed by scientists in South Korea. DIY home for less than $3500. PROYECTO GENERADOR. Good Vibrations - harvesting energy from sound. Wireless energy, the real secret behind the pyramid? 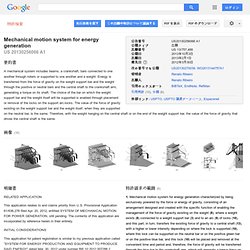 Four Quadrant Energy Exchange in Magnetic & Dielectric Fields of Induction. The Magnetic Field of Induction, Phi, is directly related to the magneto-motive force, or “current”, i, in amperes. 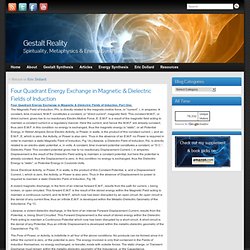