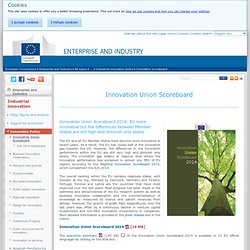 Portugal, Estonia and Latvia are the countries that have most improved over the last years. The executive summary. World's 15 Most Inventive Cities. Disruptive technologies: Advances that will transform life, business, and the global economy. The relentless parade of new technologies is unfolding on many fronts. 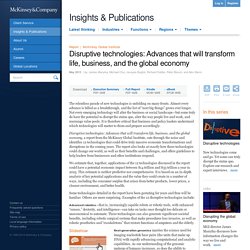 Almost every advance is billed as a breakthrough, and the list of “next big things” grows ever longer. Not every emerging technology will alter the business or social landscape—but some truly do have the potential to disrupt the status quo, alter the way people live and work, and rearrange value pools. It is therefore critical that business and policy leaders understand which technologies will matter to them and prepare accordingly. Disruptive technologies: Advances that will transform life, business, and the global economy, a report from the McKinsey Global Institute, cuts through the noise and identifies 12 technologies that could drive truly massive economic transformations and disruptions in the coming years. 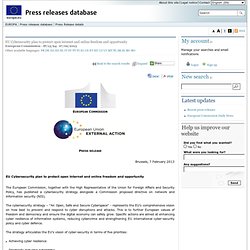 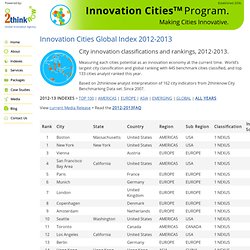 Measuring each cities potential as an innovation economy at the current time. World’s largest city classification and global ranking with 445 benchmark cities classified, and top 133 cities analyst ranked this year. Based on 2thinknow analyst interpretation of 162 city indicators from 2thinknow City Benchmarking Data set. Since 2007. Tech City Investment Organisation. For updates from us direct to your inbox, sign up to the Tech Telegram – our monthly newsletter: Through dedicated programmes, we support the digital technology sector’s need for skills, infrastructure, and investment. 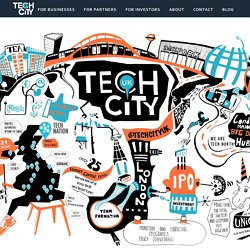 We gather and share vital information which informs policymakers. We give digital entrepreneurs a national and local voice. Our work accelerates the growth of digital businesses, in London and across the UK, at all stages of their development. Silicon Allee. PRESS RELEASES - Press Release - Scoreboard shows EU more innovative, but gap between countries widening. 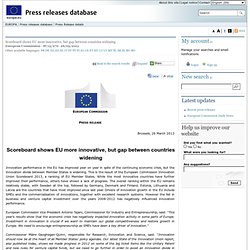 EARTO. Great stuff at Innovation on the Fringe — Katie Lips. European ICT sector maintains its R&D drive - News & events - JRC. ICT manufacturing has a much higher R&D intensity than ICT services© nh313066 (stock.xchng) The Information and Communication Technologies (ICT) sector is one of the most research intensive sectors in the EU economy, meaning that it has a high ratio of Research & Development (R&D) expenditure if compared to its value added (its revenues less materials and services purchases). 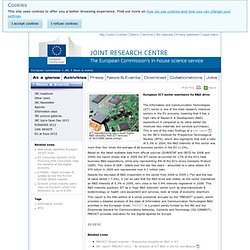 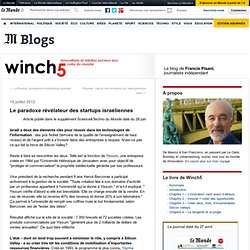 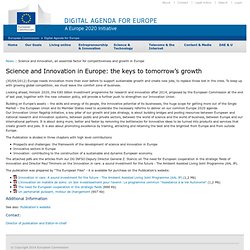 To keep up with growing global competition, we must leave the comfort zone of business. Looking ahead, Horizon 2020, the €80 billion investment programme for research and innovation after 2014, proposed by the European Commission at the end of last year, together with the new cohesion policy, will provide a further push to strengthen our Innovation Union. The Publication is divided in three chapters with high level contributions. EU research & innovation scoreboard 2012. EU makes progress, but growth slowing. 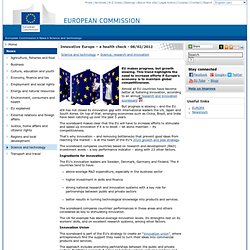 This is the second in a three-part series on the need for education reform in the United States. The first installment, "Doubling-Down on Dumb: The GOP War on Being Smart," explored the emerging political discourse criticizing public education and being well-educated, and how the toxic environment it creates makes real reform even more problematic.