Employee Engagement Study. In this employee engagement study, Elizabeth Craig of the Accenture Institute for High Performance and Lauren DeSimone of the International Consortium for Executive Development Research, explore this topic in depth. 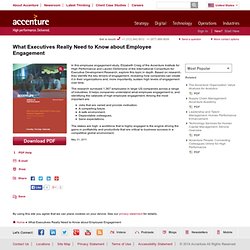 Among the most important are: Jobs that are varied and provide motivation. The stakes are high: a workforce that is highly engaged is the engine driving the gains in profitability and productivity that are critical to business success in a competitive global environment. Anreiz zur Kooperation – die wichtige Rolle des Organisationsdesigns für di. Zusammenarbeit ist kein normales Investitionsgut, von dem man einfach mehr oder weniger kaufen kann. 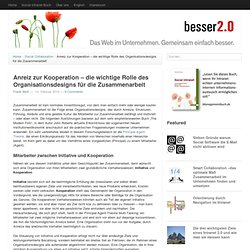 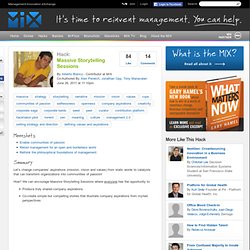 The solution comes from a courageous and selfless process to democratize organization’s strategy by running a series of Massive Storytelling Sessions. The Tube: IDEO Builds a Collaboration System That Inspires through Passion. Design Principles: IDEO's Knowledge Sharing Team synthesized their findings into five design principles that guided the creation of the Tube, and scale and adapt to inform similar efforts within other organizations. 1) Build Pointers to People: rather than trying to take all of the knowledge out of people’s heads and store it in a giant database, focus primarily on helping people to identify who they are -- their passion, experience, and expertise -- and connect people based on that information. 2) Build Rewarding Systems: a system that requires altruism is unlikely to be successful. 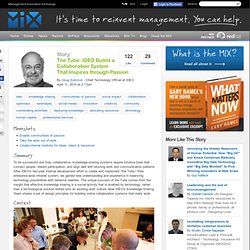 Similarly, systems that require users to participate (e.g. compliance-based design) rarely get anything more than participation at the lowest required level. Effective knowledge sharing systems must simultaneously meet the needs of the organization while motivating individual participation. A distributed social workforce drives profit and performance. 1. 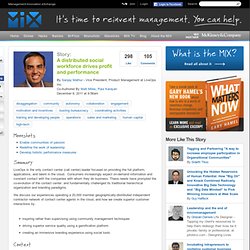 Independent contractors have control of their work opportunities By design, LiveOps’ distributed workforce has no managers and no standard business hours – contractors can bid for work each week and receive upcoming work based on their skills, historical performance, and when work is available (which is sometimes in the middle of the night or on weekends). As independent contracting agents, they conduct themselves as business owners and take that responsibility seriously in deciding where to put their time. A contractor’s livelihood is dependent upon their quality of work and access to ongoing opportunities; independent contractors who aren’t engaged simply will not succeed. 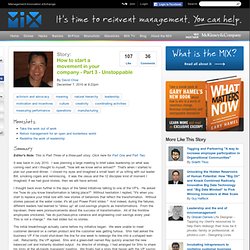 Click here for Part One and Part Two. It was back in July 2010. I was planning a large meeting to brief sales leadership on what was coming next and I thought to myself, "how will we know we've arrived? " That's when I started to plan our year-end dinner. I closed my eyes and imagined a small team of us sitting with our leader Bill, smoking cigars and reminiscing. I thought back even further in the days of the failed initiatives talking to one of the VP's.

The initial breakthrough actually came before my initiative began. How to start a movement in your company, Part 2 - accelerating momentum. The Deliberative Corporation. 1. Convene executives and management to identify the initial issue. Is big the enemy of good? How to grow without crushing agility and creativi. Remember working for that start-up? 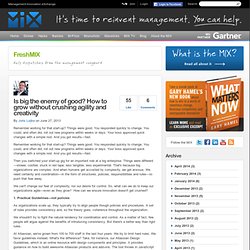 Things were good. You responded quickly to change. You could, and often did, roll out new programs within weeks or days. Your boss approved quick changes with a simple nod. And you got results—fast. Innovation Democracy: W.L. Gore's Original Management Model. The Gore Culture Bill Gore built the company on a set of principles and beliefs that guide Gore associates in the decision making they make, the work they do, and their behavior toward others. 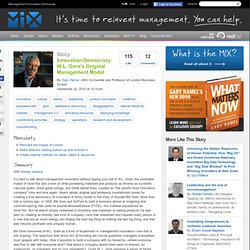 They are the basis for a culture that binds together a worldwide organization. Bill Gore’s views were influenced by the then new best seller by Douglas McGregor, The Human Side of Enterprise. In it, he defined Theory X and Theory Y as two ends of a management continuum based on very different views of human nature. Theory X, influenced by Taylor’s “scientific management” approach, manifested in the prevalent command-and-control model. Introducing the Collaboration Curve - John Hagel III, John Seely Brown, and. By John Hagel III, John Seely Brown and Lang Davison | 2:38 PM April 8, 2009. 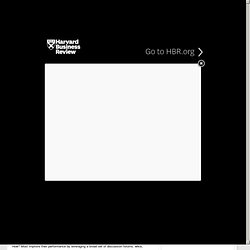