Global Energy Monitor – Building an open guide to the world’s energy system. China Plans to Build the World's First Waterless Nuclear Reactor. Government researchers in China unveiled their design for a commercial molten salt nuclear reactor that is expected to be the first in the world to not utilize water for cooling, a report by South China Morning Post (SCMP) explains. 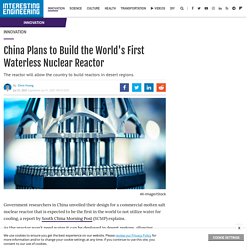 As the reactor won't need water it can be deployed in desert regions, allowing operators to utilize otherwise desolate spaces in order to provide energy for large populations. The molten salt reactor is powered by liquid thorium instead of uranium. Molten salt reactors are expected to be safer than traditional uranium nuclear reactors, as thorium cools and solidifies quickly in the open air, meaning that a leak would theoretically result in less radiation contamination for the surrounding environment. China expects to build its first commercial molten salt reactor by 2030, and the country's government has long-term plans to build several of the reactors in the deserts of central and western China. Four Ways To Get Internet Access Off-Grid Even Without Electricity.

The Internet is an integral part of modern life. 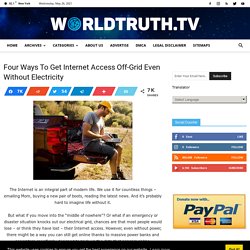 We use it for countless things – emailing Mom, buying a new pair of boots, reading the latest news. Brown’s Gas, AquaCure, & Suppressed Science. The Tom Bearden Website - Overunity Devices. A candid shot of John Bedini taken during the filming of the Documentary SeriesENERGY FROM THE VACUUM. 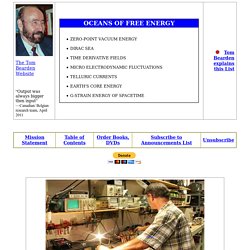 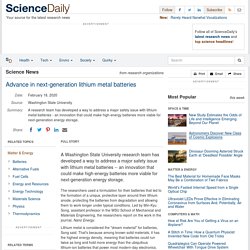 The researchers used a formulation for their batteries that led to the formation of a unique, protective layer around their lithium anode, protecting the batteries from degradation and allowing them to work longer under typical conditions. Led by Min-Kyu Song, assistant professor in the WSU School of Mechanical and Materials Engineering, the researchers report on the work in the journal, Nano Energy. Lithium metal is considered the "dream material" for batteries, Song said. That's because among known solid materials, it has the highest energy density, meaning that batteries could run twice as long and hold more energy than the ubiquitous lithium-ion batteries that power most modern-day electronics. (1) Bases78 -9 Orgone Does Wonders. (3) Colinear free energy antennas in our past. Converting Wi-Fi signals to electricity with new 2D materials: Device made from flexible, inexpensive materials could power large-area electronics, wearables, medical devices, and more.

Imagine a world where smartphones, laptops, wearables, and other electronics are powered without batteries. 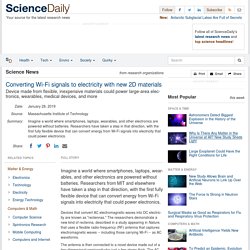 Researchers from MIT and elsewhere have taken a step in that direction, with the first fully flexible device that can convert energy from Wi-Fi signals into electricity that could power electronics. Devices that convert AC electromagnetic waves into DC electricity are known as "rectennas. " (11) (PDF) Space Travel Innovations. This Man One Ups Tesla By Inventing An Electric Car That Never Needs Charging. The concept of the electric car has been around for a very long time, and as with any other world revolutionizing technology, it’s taken a while to actually bring them out and have them on the market. 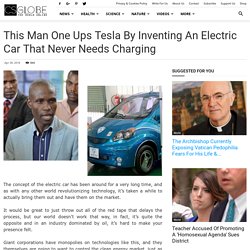 It would be great to just throw out all of the red tape that delays the process, but our world doesn’t work that way, in fact, it’s quite the opposite and in an industry dominated by oil, it’s hard to make your presence felt. Giant corporations have monopolies on technologies like this, and they themselves are going to want to control the clean energy market, just as they have been with regards to oil. Clean energy technology has huge implications, not just from an environmental standpoint, but a geopolitical one as well. Science based - Harvesting lightning from within the thunderstorm with a Faraday Cage. By using our site, you acknowledge that you have read and understand our Cookie Policy, Privacy Policy, and our Terms of Service. 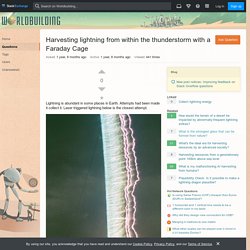 Harvesting lightning from within the thunderstorm with a Faraday Cage Ask Question Asked 1 year, 8 months ago. (1) Bases 78 Orgone Bubble - Bill Tesing Tech update 2019. (4) Viktor Schauberger - Comprehend and Copy Nature (Documentary of 2008) A new concept could make more environmentally friendly batteries possible. A new concept for an aluminium battery has twice the energy density as previous versions, is made of abundant materials, and could lead to reduced production costs and environmental impact. 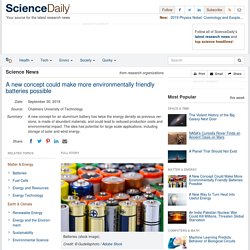 The idea has potential for large scale applications, including storage of solar and wind energy. Researchers from Chalmers University of Technology, Sweden, and the National Institute of Chemistry, Slovenia, are behind the idea. Using aluminium battery technology could offer several advantages, including a high theoretical energy density, and the fact that there already exists an established industry for its manufacturing and recycling. Compared with today's lithium-ion batteries, the researchers' new concept could result in markedly lower production costs. "Additionally, our new battery concept has twice the energy density compared with the aluminium batteries that are 'state of the art' today. " Jason Verbelli GlobalBEM 2016. Voices – GlobalBEM. Voices of the Breakthrough Energy Movement – Foster Gamble , 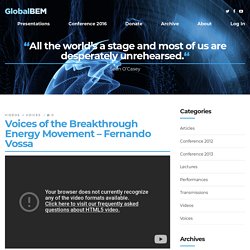 Implosion Energy Breakthroughs! Sonic Cavitation, Nano Geometry, Conservation. What You Need To Know About The HUTCHISON EFFECT And The Power FREQUENCY. WORLD'S FIRST - SELF POWERED Q Beta Prototype with Silicon Crystal Graphite Powercells. Pulling Energy from the Vacuum - Lt. Col. Thomas Bearden. Why Anaerobic Digestion Is Becoming the Next Big Renewable Energy Source. When Resourceful Earth Limited announced it would be building a facility to convert 35,000 tons of the local food waste to power each year—enough to provide 80 percent of the energy to the nearby town of Keynsham, U.K—the company became the latest to employ anaerobic digestion to reduce waste, generate energy and cut down on carbon emissions. 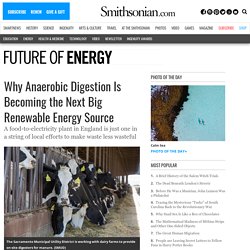 It’s localism taken to its conclusion, not just what a community buys, but what it gets rid of, too. “That’s our ideal plan, to make … a system where we’re actually a closed loop,” says Jo Downes, brand manager for Resourceful Earth. “It’s all self contained. Food waste is produced by a community, it’s converted to electricity, and it goes back to that community again. Limitless Energy From The Vacuum. Infinite Energy, But Not For The Masses. Extreme Engineering Unlimited Water Source - Megastructures (Documentary) Consent Form. Sink your toes into this: Beach sand can be used to make lithium-ion batteries that last three times longer than current models, according to a study published in the journal Scientific Reports.

“This is the holy grail: a low-cost, non-toxic, environmentally friendly way to produce high performance lithium-ion battery anodes,” said Zachary Favors, a graduate student at UC Riverside, in a statement. The idea came to Favors when he was sitting on the beach after surfing, and realized the material was made up of a high percentage of quartz, or silicon dioxide. The Future Of Energy? Bloom Energy Boxes Already Power Google, eBay, Others. The Breakthrough Energy Revolution: Rodin Coil Dynamics FULL FILM. Experiment: John Keely's Rotating Musical Sphere. Water is the Ultimate Mystery. Water is the most common substance known to man and also the most mysterious. The list of anomalies associated with it runs as long as the ocean is deep. Modern science has ignored this seemingly simple molecule, dismissing any qualities beyond the materialistic as pseudoscience and new age baloney.

Hemp ethanol- Industrial Hemp. Hemp fuels- Environmentally friendly fuel sources The basics: Hemp can provide two types of fuel. 1. Hemp biodiesel – made from the oil of the (pressed) hemp seed. 2. Ford And Deisel Never Intended Cars To Use Gasoline. Antigravity & Open System "Free Energy": Searl Effect Generator. Working Free Energy Devices That Go Way Beyond The Laws of Physics. Free And Virtually Unlimited Fuel To Heat Your Home. Scientists Arent Going to Tell You This..The Truth Will Shock You! Easiest DIY Windmill For Producing Electricity Ever! Solar Panel-In-a-Tube Generates Power and Hot Water At the Same Time. Self Running 40kW 40,000 Watt Fuelless Generator Full Video. How It Works — The GravityLight Foundation. + Instant light, any time. 5 ways you can use the human body to generate electricity. Think of the human body as the ultimate distributed energy resource.

Of all the renewable fuels, there is perhaps none more sustainable than your own body. Today, there are already a few ways the human body can help produce electricity -- from simple exercise to human waste. None of these outlandish technologies are going to help save the grid anytime soon, but it's fun to imagine a future where your organs can power the supercomputer in your brain. 1. Blood flow. Wind farms could become 'monuments of a failed civilisation', top environmentalist claims. Earth-friendly energy is anything but. NEW YORK — Environmentalists worship solar energy and wind power as Earth-friendly answers to their ecological prayers. How To Build Wind Generator using Floppy Stepper Motor. Kid Powered Toys That Harness The Power of Play. Inhabitat - Green Design, Innovation, Architecture, Green Building. The Estream portable generator is powered by, arguably, the most reliable natural resource on the planet: running water.

The Space Powered Generator – Free Energy? The Vortex. Science and Energy. This Pedal-Powered Washing Machine Is Electricity-Free And Costs Only $40. 60 Minutes of Exercise On This Free Energy Bicycle Can Power Your Home For 24 Hours! Man Solves Tesla’s Secret To Amplifying Power By Nearly 5000% Overunitydotcom. Thorium: An Energy Solution.

EMF Safety Network. This Lamp Will Burn All Night Powered By Nothing More Than Salt Water. Nesaranews Hidden Technologies. Nanowires Give Solar Fuel Cell Efficiency a Tenfold Boost. TO ALL SCIENTISTS ON THIS PLANET! 22 Massachusetts towns will build their own gigabit internet service. Free-Energy Devices, zero-point energy, and water as HHO fuel. 4 Gadgets You Didn’t Know Could be Solar-Powered. The Tesla Science Foundation - Home. Solar Energy that Doesn’t Block the View. Magnetic Motor: Cheap Energy No Pollution. Nikola Tesla. This handy device will let you send text messages even after the grid crashes.

SOLAR IMPULSE - AROUND THE WORLD IN A SOLAR AIRPLANE. Conehead Generators Put A New Spin On Rooftop Solar.