Carmine Gallo: "The Storytellers Secret" How Much Time Does It Take to Create Personas? 16 trends that will define the future of video games. Hundreds of game developers, publishers and analysts recently descended on Brighton for the annual Develop conference. 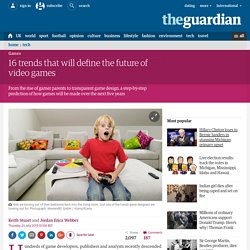 There were controversial keynotes, there were talks about how to make money in a rapidly fragmenting marketplace, but there were also some interesting forward-looking sessions, concerned with where the games industry as a whole is heading – not so much in terms of game design (that’s the domain of events like the Game Developers Conference and SXSW), more in the way the sector will operate as a business. Some of it is pretty weird. Here, then, are the major trends that we picked up on, all of which could completely change the way games are made – and played – in the near future. 1.

Parents as gaming advocates At the same time, families are spending more time together in the living room, with a reduction in the number of children with TVs in their rooms. What Team Centered Goal Setting Really Looks Like — StackStreet. An Anti-Creativity Checklist for 2015. Learn to Think Long-Term Like Jeff Bezos. Seth Godin: How to get your ideas to spread. Harvard Bonin's Blog - In Search of Bigfoot (The eight elusive phases of game development) The following blog post, unless otherwise noted, was written by a member of Gamasutra’s community. 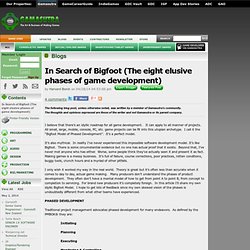 The thoughts and opinions expressed are those of the writer and not Gamasutra or its parent company. I believe that there’s an idyllic roadmap for all game development. It can apply to all manner of projects. All small, large, mobile, console, PC, etc. game projects can be fit into this utopian archetype. I call it the “Bigfoot Model of Phased Development”. Steve Jobs On Value Of Ideas. Personify Your Product. Build Less. Conventional wisdom says that to beat your competitors you need to one-up them. 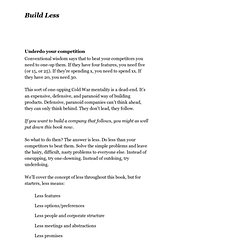 If they have four features, you need five (or 15, or 25). If they're spending x, you need to spend xx. If they have 20, you need 30. This sort of one-upping Cold War mentality is a dead-end. It's an expensive, defensive, and paranoid way of building products. If you want to build a company that follows, you might as well put down this book now. So what to do then? We'll cover the concept of less throughout this book, but for starters, less means: Less features Less options/preferences Less people and corporate structure Less meetings and abstractions Less promises. Beware the Bloat Monster. As things progress, don't be afraid to resist bloat. 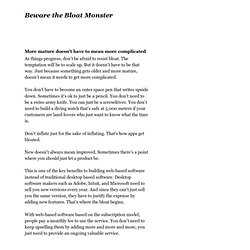 The temptation will be to scale up. But it doesn't have to be that way. Just because something gets older and more mature, doesn't mean it needs to get more complicated. You don't have to become an outer space pen that writes upside down. Sometimes it's ok to just be a pencil. Tell Me a Quick Story. Don't Do Dead Documents. There's Nothing Functional about a Functional Spec. Don't write a functional specifications document These blueprint docs usually wind up having almost nothing to do with the finished product. 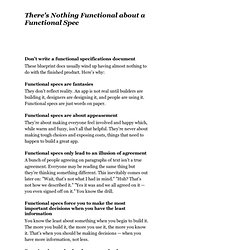 Here's why: Functional specs are fantasies They don't reflect reality. An app is not real until builders are building it, designers are designing it, and people are using it. Functional specs are about appeasement They're about making everyone feel involved and happy which, while warm and fuzzy, isn't all that helpful. Functional specs only lead to an illusion of agreement A bunch of people agreeing on paragraphs of text isn't a true agreement. Get Defensive. Epicenter Design. Epicenter design focuses on the true essence of the page — the epicenter — and then builds outward. 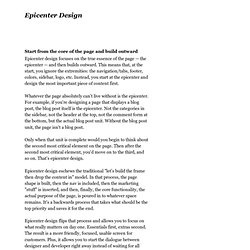 This means that, at the start, you ignore the extremities: the navigation/tabs, footer, colors, sidebar, logo, etc. Interface First. Too many apps start with a program-first mentality. 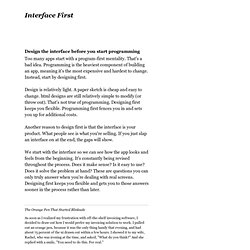 That's a bad idea. Programming is the heaviest component of building an app, meaning it's the most expensive and hardest to change. Instead, start by designing first. Design is relatively light. A paper sketch is cheap and easy to change. html designs are still relatively simple to modify (or throw out). Another reason to design first is that the interface is your product. We start with the interface so we can see how the app looks and feels from the beginning. The Orange Pen That Started Blinksale. Test in the Wild. "Done!" Done. 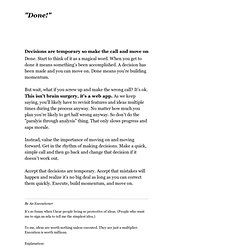 Start to think of it as a magical word. When you get to done it means something's been accomplished. A decision has been made and you can move on. Done means you're building momentum. But wait, what if you screw up and make the wrong call? From Idea to Implementation. Go from brainstorm to sketches to HTML to coding Here's the process we use to Get Real: Brainstorm Come up with ideas. 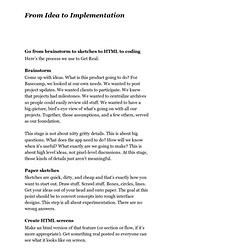 Can You Handle It? Hidden Costs. Even if a feature makes it past the "no" stage, you still need to expose its hidden costs. 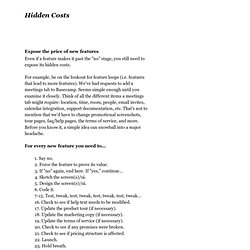 Start With No. Make features work hard to be implemented The secret to building half a product instead of a half-ass product is saying no. It Just Doesn't Matter. Half, Not Half-Assed. Hire the Right Customers. Find the core market for your application and focus solely on them The customer is not always right. The truth is you have to sort out who's right and who's wrong for your app. The good news is that the internet makes finding the right people easier than ever.